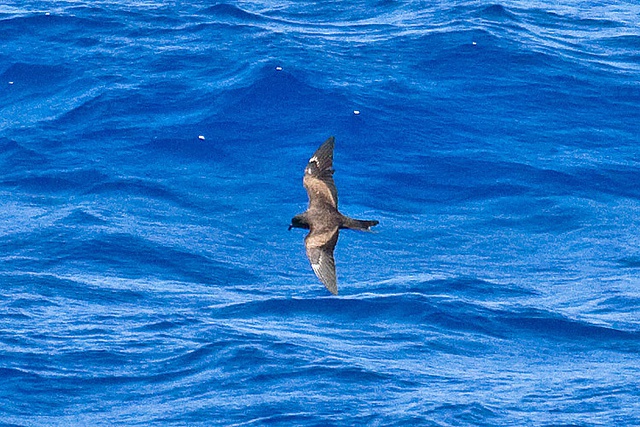 Skerrett is now making a case for Seychelles to explore and implement this form of tourism to boost its tourist arrivals.

All this happened after the world’s leading authority of sea-going seabirds Hadoram Shirihai, visited Seychelles recently and teamed up with Skerrett.

According to Skerrett the two ornithologists explored “little known waters of the Seychelles bank north of Denis Island.”

Writing about the experience for daily newspaper the Seychelles Nation this week, he revealed that Shirihai has made significant “new discoveries including six new species or species thought to be extinct” using a unique research formula. According to Skerrett, much of Shirihai’s ground-breaking sea-bird research has been achieved through “chumming” which specially uses blocks of frozen oily fish so as to draw the attention of elusive and rare seabirds.

“We teamed up together to carry out the first ever chumming operation in Seychelles waters off Denis Island on the edge of the Seychelles Bank to try to learn more about the poorly known pelagic birds of our region,” Skerrett says. “Our target was mainly to find storm-petrels, secretive birds that spend their lives on oceans far out of sight of land returning to wild remote islands only to breed. The results were truly amazing.”

Denis Island management created blocks of “chum” as specified by Shirihai which ended up attracting rarely sighted birds. “It worked like a charm pulling in storm petrels seemingly from nowhere. In just two days we recorded 25 Wilson’s Storm-petrels and a Black-bellied Storm-petrel, both of which breed close to Antarctica and have rarely been seen in Seychelles,” Skerrett says. “But perhaps most interesting was the discovery of thirteen Matsudaira’s Storm-petrels.”

Skerrett who runs the Seychelles Bird Records Committee says that the rare Matsudaira’s Storm-petrel is known to breed on remote inaccessible islands off southern Japan.

The Matsudaira Storm-petrel is classified by Birdlife International as vulnerable because of its restricted range.

“After the breeding season, it is thought to move south across the equator, to the Timor Sea off Australia, and then west into the Indian Ocean, but its wintering grounds are largely unknown,” Skerrett says. “It has been speculated that it may be in the tropical belt from Seychelles to East Africa but there have been very few reliable reports and Seychelles Bird Records Committee have recorded just one single bird seen between Providence and Farquhar in 1995.”

The presence of Skerrett in the expedition was critical as the Seychelles Bird Records Committee authenticates all reports of bird species in Seychelles.

“Chum” blocks were used in five different sites off Denis island and Skerrett accompanying Shirihai had to travel over 220 nautical miles to reach them. Only one site failed to yield expected results. The other four sites made the first ever “Chumming” aided western Indian Ocean exploration worthwhile. “The number of birds seen in such a short space of time suggests the Seychelles Bank could be a major location for Matsudaira’s Storm-petrels, which are difficult to find anywhere else in the world.” Skerrett says adding that Seychelles is now on a pole position to harness this form of eco-tourism to shore up tourist arrivals.

“There is the potential to develop this as a new source of tourism and there are many birders around the world who are taking to this relatively new form of ecotourism.” Skerrett says. “Pelagic seabirders will travel a long way to see such enigmatic species as Matsudaira’s Storm-petrel and while we need to learn a lot more, Seychelles might be in the top one or two locations worldwide to see them.”

The findings that the two renown birding enthusiasts made using frozen floating fish makes a strong case for Seychelles to develop pelagic seabird trips which is popular in the USA, Australia, UK, Germany, Netherlands and South Africa.

“We are scratching the surface and need to learn more about the locations and seasonality of our mysterious visitors. But we have made a start on Denis Island,” Skerrett says. “As Seychelles reaches capacity for hotels, perhaps it is time to explore the untapped ecotourism potential of the rich oceans around our islands that make up over 99.9% of the Seychelles Exclusive Economic Zone (EEZ).”