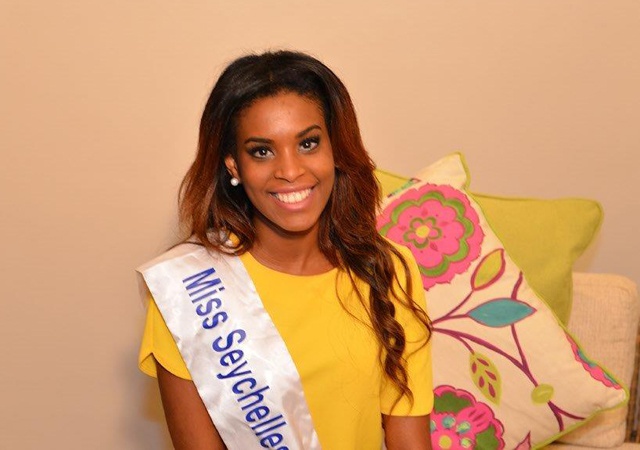 Miss Seychelles 2014 Camila Estico says she has gained valuable experiences participating in the Miss World beauty pageant which she is hoping to put to good use to help her successor. (Seychelles Tourism Board)

The crowning of Miss World 2014 last Sunday has surely brought to an end all the excitement and anxiety that had engulfed contestants from the 121 countries who took part this year, nevertheless the Seychelles beauty queen believes her work is not yet done.

Getting back to the Indian Ocean archipelago on Tuesday, only two days after crowning night in London, Miss Seychelles… Another World 2014, Camila Estico said that she is willing and ready to set a new trend by sharing the valuable experiences gained with her successor.

Shedding tears of joy upon arrival at the Seychelles International airport as she met with family members and officials of the Seychelles Tourism Board that had the responsibility to groom her for the pageant, Camilla described her overall experience as challenging and very different from her initial expectations.

“Reality hits you when you need to wake up at 5am to do your hair and make-up to keep up with the other girls,” she told journalists.

Camila who said she considered herself more of an ambassador for Seychelles, told SNA that what she is planning to share with the next Miss Seychelles next year is that “you need to know who you are as a person.”

“Knowing who you are and being comfortable with it is important.”

Camilla would also like to see future Miss Seychelles' strive to come up with better projects since she experienced how the other contestants are very competitive and some even have organizations already set up.

After winning the Miss Seychelles title at the end of May this year, the cheerful and confident young lady wanted to ‘become a good role model for other young people’; which is why she started an ambitious ‘back to basic’ project  which is aimed at encouraging people to eat healthier food.

Although her beauty with a purpose project was not chosen to be amongst the finalists Camilla says she will continue to work on healthy living awareness throughout her reign and bring more publicity to Seychelles.

After some six months of preparations Camila set out to join young girls from 121 countries around the globe to represent their respective countries with the hope of winning the prestigious crown at this year’s 64th Miss World contest.

In spite of not winning the prestigious title, the 23 year old did have her proud moments in London, a journey which she said has also brought her good friends from the likes of Miss Venezuela, as well as Miss World 2014 - Miss South Africa and the third place winner Miss USA, to whom she is thankful as she said they gave her many tips.

On the competition side, her dancing skills which saw her perform a high-spirited dance that mixed elements of contemporary dance and traditional Seychellois Moutya earned her a post in the quarter finals of the Miss World Talent competition.

Dressed in a flowing yellow skirt and brightly-coloured blouse, Camila let her bare feet do the talking, Seychelles-style, to the beat of Jany de Letourdi song ‘Tanbour’.

“When I heard my name being called knowing I had made it to the quarterfinals I cried,” Camila told SNA upon being interviewed on her arrival at the Seychelles International airport.

“I was honoured to be amongst the 13 selected out of 94 contestants for talent, especially because it was a mix of Moutya and lyrical contemporary which I felt was different and reflected our country.”

On crowning night Camilla together with the other contestants also got to dance alongside American artist, LMFAO’s Sky Blu who performed his new single ‘We love girls’.

“Being placed in the front row where everyone could see our national ‘Moutya’ skirt makes me feel that I did achieve my goals,” revealed Camila

The closest any of Seychelles beauty queens had come to the title was in 1972 when Jane Stravens made it to the top 15 finalists in the Miss World pageant.

For Camilla, she believes her evening gown was a winner since it won her an interview with one of the presenters of Miss World 2014 finals, Frankie Cena.

The dress was custom designed by young fashion designer Karine Dupouy who was born in the neighbouring indian Ocean island of Mauritius but raised in the Seychelles since the age of 3. Dupouy owns the 'Kankan' brand launched in 2012 considered to be the haute couture of Seychelles.

“Personally I think my dress was the dress of the night,” said Camilla.

The Seychelles Tourism Board (STB) was responsible for grooming Camila for the Miss World Pageant.

For Camila the travelling, interacting with different people, different languages and much more that was provided through STB gave her an upper-hand in the competition.

STB's Chief Executive Sherin Naiken says Camilla is one of the best participants that Seychelles has produced so far as she displayed many qualities needed to be a good Miss Seychelles.

“This year, we made sure that during the audition process we picked out girls who had talent and a good project, in order to prepare them for Miss World. I feel like Camilla was chosen because she has all of these qualities”, said Naiken adding that STB wanted to promote Seychelles not only its beauty but its people as well.

It's South Africa’s Rolene Strauss who was chosen to wear the prestigious Miss World crown for the next year while Miss Hungary, Edina Kulcsar, was the runner-up and Miss United States, Elizabeth Safrit, came out third in the 64th annual competition.

A live sing off between Miss Malaysia and Miss Scotland was necessary to decide on a winner for Miss Talent which finally went to Miss Malaysia.

This year for the first time in Miss World judges voted 5 Beauty with a Purpose projects in first place after being unable to seperate Misses Brazil, Guyana, India, Indonesia and Kenya.

Strauss is the third South African to be crowned Miss World, after the country won the title in 1958 and 1974.

Venezuela remains the country that has produced the most Miss World with six titles, ahead of India and the United Kingdom on five titles each.