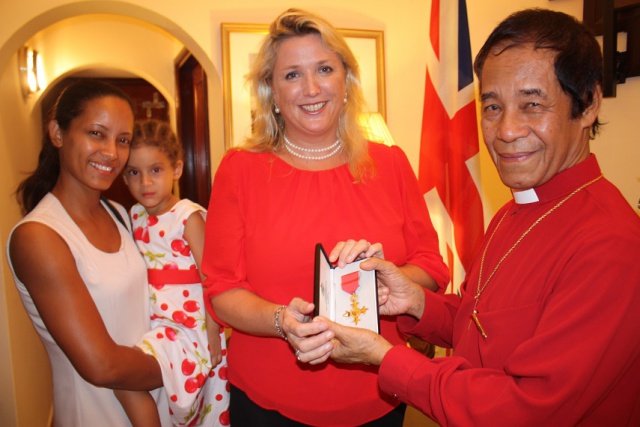 (Seychelles News Agency) - Anglican Archbishop Emeritus of the Indian Ocean, French Chang-Him has been designated an Officer of the Most Excellent Order of the British Empire (OBE) by Her Majesty Queen Elizabeth II.

He was presented with the honour last week by the British High Commissioner to Seychelles, Lindsay Skoll, in a private ceremony at her residence in the presence of family and friends.

“It is for his services to reconciliation, human rights, charity and democratic values, and also for his invaluable service to British nationals in Seychelles, past and present,” said Skoll in her citation officially awarding the OBE to Archbishop Chang-Him.

Speaking to the local media this morning the Archbishop who described himself as someone who likes to work quietly without attracting much attention said he was surprised to receive the award but is nevertheless thankful adding that this has given him the mandate to continue with the work he is doing.

“I dedicate this award to the almighty God, my family, the British community here but it’s also to all the organisations I represent because we work as a team, so finally that leads to Seychelles that this award is being dedicated to,” he told journalists.

“And this inspires me to continue to do the work I have been trying to do and one of my deepest concerns is the question of reconciliation, uniting our people especially with Christmas coming and peace in the coming year. So this is going to be my ongoing goal to try to work for the unity of our people.”

The OBE – an extremely rare recognition by the British government

The Order of the British Empire was established by King George V on 4 June 1917, to honour the many thousands of people who had served in numerous non-combatant capacities during the First World War.

Archbishop Chang-Him becomes the first Seychellois to receive such an award in almost 40 years.

The Seychelles founding president, Sir James Mancham was the last Seychellois to be awarded the Honorary Knight Commander of the Order of the British Empire in 1976.

As the British High Commissioner, Lindsay Skoll said she may have the role of nominating somebody for the award but that it is a very deep and extensive process in which her majesty the Queen takes a very personal and active role in the approval process.

“The reason why the Queen has awarded the Archbishop this way is that his service to Seychelles has been exceptional, as his service to the Anglican Church and that’s for over 50 years........the reason why we have given a very British Award to Bishop French is that he also for us and for Her Majesty the Queen encapsulates some very British Values and those in particular are the values of democracy, freedom of thought, community spirit, charitable works and most definitely national inclusion and I think this is really important,” said Skoll.

“….And for us what struck the queen most definitely was despite the bishop’s own pain and loss….I think your (Bishop Chang-Him) sense of forgiveness, reconciliation and positive role modelling for people is really really impressive.”

Speaking to SNA, Archbishop Chang-Him described two of the painful events in his life as the loss of his wife who succumbed to cancer in 1996. He also lost his brother Davidson Chang-Him who was shot during the coup of June 5, 1977 which saw France Albert Rene remove James Mancham from power.

Congratulating Archbishop Chang-Him the Seychelles President James Michel said today that his elevation to the Order of the British Empire is testimony to his standing “as a man of peace, justice and courage not only in Seychelles, but also internationally, especially in the Commonwealth.”

“It is a highly deserved recognition of your lifetime achievements, your dedication and commitment to your calling, and a tribute to your many years of service, with ardour, compassion and humility, to the people of Seychelles. It is also a great honour that has been bestowed on our country, which could not have come at a more appropriate time as we prepare to celebrate Christmas,” said Michel in a press statement issued by State House.

Over 50 years of service to the Anglican Church

Archbishop Chang-Him who attended theological college in England was ordained deacon in the UK in 1962. He was ordained to priesthood in 1963 at the Anglican’s St Paul’s cathedral in the Seychelles capital of Victoria.

He also served as the Bishop of the Anglican diocese of Seychelles from 1979 until his resignation in 2004. He held the position of Archbishop of the Indian Ocean from 1984 to 1995.

Archbishop Chang-Him who continues to lead services at various parishes across the country was conferred the title of Archbishop Emeritus by the Indian Ocean Province of the Anglican Church earlier this year.

He is today also involved in various charitable organisations including the Cancer Concern Association and he is also a member of the Inter-faith Committee which bring together the leaders of different denominations in the country.