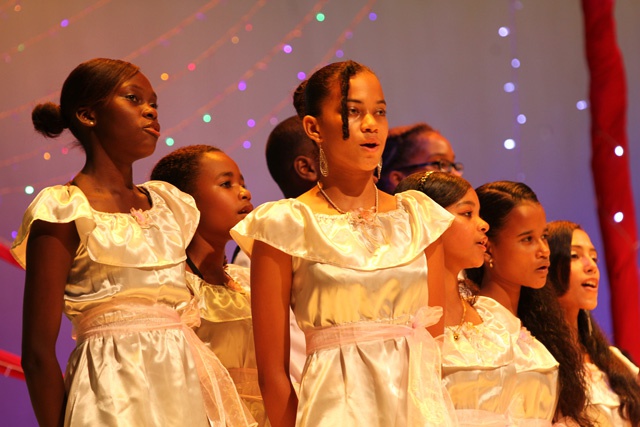 Christmas at Sea, a concert organised by the Office of the President at the International Conference Centre last night (Mervyn Marie, Seychelles News Agency)

(Seychelles News Agency) - ‘Christmas at sea’ was the theme of the annual Christmas Carol concert presented by children of all ages in the capital of Victoria in the Seychelles islands last night.

The concert was a gentle reminder of the vast ocean that surrounds the archipelago in the Indian Ocean and the men and women who may be spending ‘Christmas at sea, far away from home…’.

Jean-Phillip Fostel and Adelle Allisop added their names to the long list of singers who have sung this 1880’s song popular amongst mariners, also known as ‘Christmas by the bay’.

For over an hour, young boys clad in sailor suits sang carols alongside girls wearing light blue mermaid dresses with flowers in their hair performed Christmas carols on a ‘beached’ stage surrounded by treasures, gifts and shells and a gentle touch of wavering blue lights.

The choirs included a group of young boys in Santa’s suits from the ‘Foyer de Nazareth’, young singers from the all girls orphanage ‘Foyer de la Providence’ and a mixed choir from the President's Village.

These three homes which provide shelter and care for orphaned or less fortunate children of the Indian Ocean Islands are administered by Children's Homes Foundation, a charitable organization.

Teenage girls from the ‘Foyer de la solitude’, the National Schools choir, the National  Children’s choir, the Independent School choir and the One Harmony choir were also amongst the repertoire of groups performing a mixture of contemporary and traditional Christmas songs at the event.

Creole songs such as ‘En zetwal file’ [A shooting star] gave the local sega rhythm to the show and saw the kids dance jovially on stage.

After singing a few songs, each group read a special message to the audience expressing their desires and dreams for the coming year.

Young local stars such as Leo Hoareau also graced the stage to perform individual songs at the fully-packed auditorium of the International Conference Center yesterday evening.

The show which was attended by several government officials, was presented by the former Miss Seychelles for 2013, Agnes Gerry and was broadcasted live on the national television channel of the Seychelles Broadcasting Corporation, S.B.C.

For the grand finale, the Seychelles President James Michel and his young daughter Laeticia bestowed gifts on representatives of the nine choirs who sang in the Christmas show.

The gifts were delivered on stage by a well tanned Santa Claus in sun glasses in his red and white suit and long white beard.

He did not have a sleigh but instead he came in a pirogue [traditional boat] and there was no snow, for he landed on a tropical beach in Seychelles!

His arrival was a definite way to get the 90,000 people of Seychelles, a majority of whom are Roman Catholics and its visitors, into the spirit of celebration for Christmas!

SNA presents a series of photos from the concert by Mervyn Marie, Photo license: CC-BY