Count your coins! - Central Bank of Seychelles encourages the islanders to surrender piggy banks for Christmas 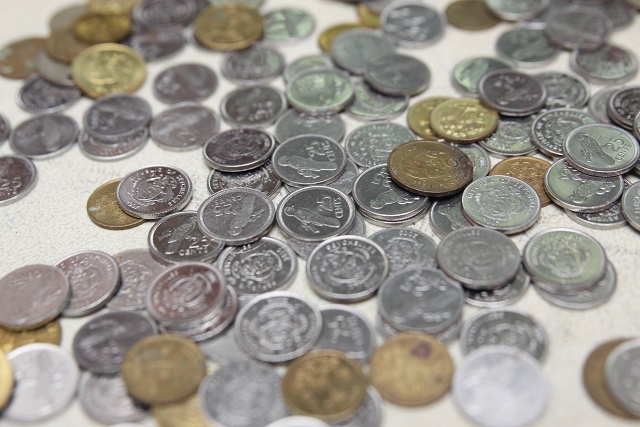 Small-denomination coins of the Seychelles which consist of 1, 5, 10 and 25 cents as well as 1 and 5 rupee coins. (Joe Laurence, Seychelles News Agency)

(Seychelles News Agency) - Christmas is just around the corner and people are busy going around looking for that perfect gift for loved ones especially parents who have the hardest tasks picking out gifts for their children.

Many children in Seychelles also save up during the year to buy gifts for their parents and siblings or simply to have a little extra pocket money to spend during the festive period.

One of the ways of saving up for Christmas for those in their younger days is by stacking away each and every little coin they come across.

“I have been stacking up every single little coin I find hanging around the house since the beginning of the year. My mom also gives me whatever coin she has left after a shopping trip,” 10 year old Esther told SNA.

“I have counted and I have around 300 rupees (around $20) which I am going to use to buy a Christmas gift for my little sister.”

Many parents also try to instill in their children the importance of saving up by encouraging them to start collecting little coins hanging around the house.

But little do many realize the repercussion that this little innocent act can have when it comes to the everyday exchange of money in circulation.

Impact of coin collection on the economy

The Central Bank of Seychelles (CBS) which is located in the Seychelles capital of Victoria told SNA that a lack of small denomination coins can have a significant impact on the business community and customers alike.

Instead of having to give change back to the customers, merchants would round up the prices of certain commodities to the nearest 25 cents or 10 cents as they do not use or have the smaller denominations of 5 cents and 1 cent coins to give back.

“This does cause a slight increase in prices although minimal,” CBS’s Head of the Banking Services Division, Mike Tirant told SNA in a recent email interview.

“The impact of this scenario on creating inflation will be relatively insignificant when compared to other more prevalent parameters that affect inflation such as the exchange rate, the price of fuel and others,” added Tirant.

Additionally, December is one of three periods during the year when the exercise intensifies as the public can deposit coins they have collected at designated counters at the Seychelles Postal Services situated in the heart of the capital of Victoria. A similar exercise is done during the school holidays in April and August.

“Coins are being exchanged for notes by both children and adults alike. This stems partly from coins collected over time at home from piggy banks or coins that have been lying around at home or in the car,” Tirant explained to SNA.

Once received these coins, notably the 25, 10, 5 and 1 cent denominations are re-circulated through the different Commercial banks in the Indian Ocean island nation.

The larger denomination of 5 and 1 rupee can also be exchanged, although these coins circulate much more quickly through the banking system than the lower denomination ones.

“The exercise of collecting coins also contributes to the maintenance of a balanced stock level at the CBS in conjunction with the normal replenishment of the stock when new coins minted and shipped to Seychelles from overseas,” said Tirant.

The Central Bank says it needs to keep encouraging the public to participate in the coin exchange programme, as not only will this help re circulate coins back into the system but also will help to reduce the amount of new coins minted from overseas.

Approximate minting cost in Seychelles rupees (SCR) for the coins, according to the Seychelles Central Bank:

The notes and coins that leave the country with visitors wanting to keep them as souvenirs also have to be replaced by new minted coins and newly printed notes.

CBS states that it is mandated by law to provide lower denomination coins.

“In fact, the current usage of coins shows that all coins are in demand, even the 1 cent coins that are normally rarely used,” pointed out Tirant.

In order to ensure that coins are kept circulating in the country and that there is no shortage, CBS said the coin collection exercise as well as the minting of new coins in advance will continue.

Finance » Be a reporter: Write and send your article » Subscribe for news alert
Tags: Central Bank of Seychelles, coins, Christmas