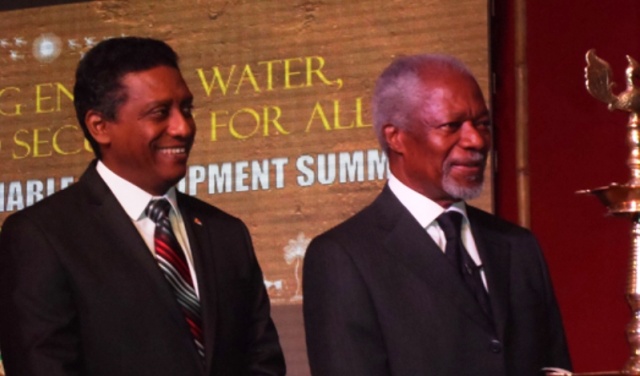 (Seychelles News Agency) - Preserving the world’s oceans is a responsibility requiring long-lasting commitment from all nations, according to Seychelles Vice President Danny Faure. The Vice-President expressed his views on the blue economy while delivering a keynote speech as at the opening of the Delhi Sustainable Development Summit (DSDS), according to a press statement from the Seychelles Ministry of Foreign Affairs.

As small and island states of the world are the worst affected by climate change and the rise in greenhouse gas emissions, he stated that the global agenda need to move towards a blue economy, where the survival of the small and island nations were taken into consideration.

Traditionally focused on land-based sustainable development, the vice-president’s sentiments were welcomed by delegates at the summit, at which Nobel Prize laureate and former Secretary-General of the United Nations, Kofi Annan, also addressed delegates.

Annan expressed the view that a fundamental shift in policy-making was needed to focus on sustainability and reverse the negative effects climate change inflicted on developing countries.

“We need the right kind of incentives and support to counter the effects of climate change. Richer countries need to take up global commitments to reduce the amount of global gas emissions.”

The Energy and Resources Institute (TERI) has run the DSDS since 2001 as an internationally-acclaimed platform to facilitate the exchange of knowledge on sustainable development.

The recipient of the Tenth Sustainable Development Leadership Award, presented annually at the DSDS, was the Chairman and Managing Director of Mahindra & Mahindra, Anand Mahindra. The Award recognises global leaders for their contributions in the field of sustainable development. President Michel was the recipient of this prestigious award in 2013.