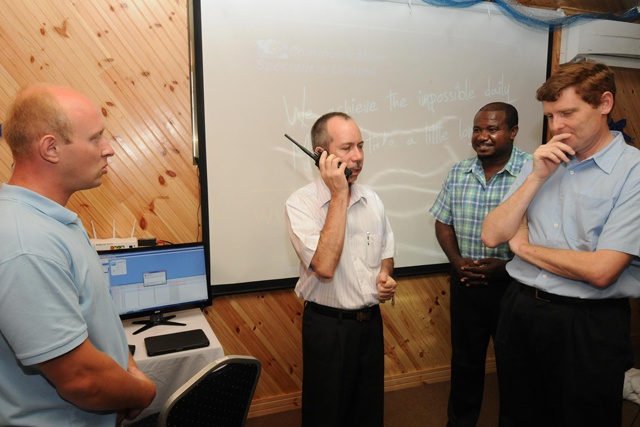 (Seychelles News Agency) - The Seychelles police is now in a better position to ensure public safety, detect and respond to crime faster after the commissioning of the Motorola Integrated Digital Radio Network.

The digital radio system funded by the United Nations Office against Crime and Drugs (UNODC) which was launched this morning is also primed at boosting Seychelles’ police emergency responses such as accidents, fire and natural disasters.

St Louis - central district of the main island of Mahe, Anse Royale in the south, Anse Soleil on the west coast, Grand Fond on the east coast of the second most populated island of Praslin and the highest peak of the third main populated island of La Digue will be the base centres of the new system providing comprehensive coverage of Mahe, Praslin, La Digue and the nearby islands.

The Seychelles Minister for Home Affairs and Transport Joel Morgan also responsible for the police department has described the Integrated Digital Radio Network as a milestone in the modernisation of field operations by the police.

Under the new communications system every police officer will be connected to the main dispatch centre at the Police Headquarters in the Seychelles capital of Victoria. Previously, communication was on separate systems and platforms where officers had been using mostly mobile phones to speak to each other while patrolling the Indian Ocean island state.

According to Morgan the new unified system will enhance the efficiency of mobile patrols.

"Gone are the days when some officers on patrol could act as if no one was watching them,” he said.

“Now everybody's whereabouts will be carefully monitored, in the same way as assistance will be dispatched promptly wherever necessary.”

UK based Communications Specialists Limited that has an office in Seychelles installed the system and according to its Managing Director Kervin Labrosse, it will no longer be possible to listen to police communications as was the case in the past when the analogue system was still in use.

According to Labrosse, who is a Seychellois, his company will also be involved in maintaining the system and the overall training of police officers to operate this unique network. Communications Specialists is already involved in many countries in Latin America, Africa and the West Indies.

The UNODC started working in Seychelles in 2009 and for the last four years “the programme has contributed over four million dollars of support to Seychelles.”

Most of the support has been aimed at improving the criminal justice system such as the islands’ courts and prison facilities, in relation to the prosecution of maritime piracy offenders.

Now that the radio system has been commissioned, the Home Affairs and Transport Minister also announced this morning that work is ongoing to install new real time CCTV surveillance equipment.

The high definition surveillance cameras have been purchased by the Seychelles government at a cost of 10 million Seychelles rupees (a little over $700 thousand).

According to Morgan "the state of the art wireless network" will allow for great versatility and mobility, replacing the "outdated ones" that have been in use for some years.

“The cameras may be moved anywhere including to temporary hot spots and allow for high definition and close-ups,” said Morgan.

The Seychelles islands with a population of around 90, 000 people have an 800 strong police force.