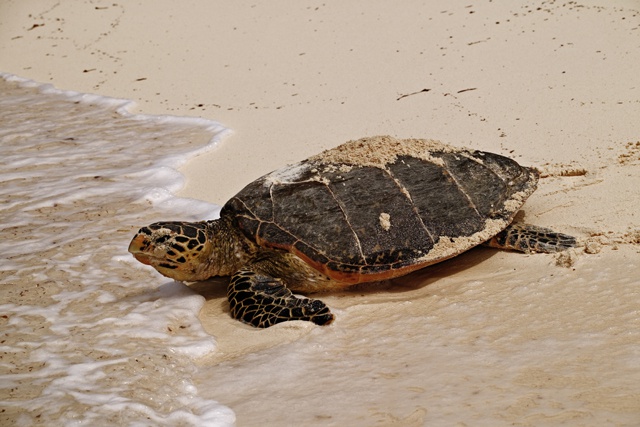 Female hawksbill turtle heads back to sea after laying her eggs. (Nature Seychelles)

(Seychelles News Agency) - Earlier this year Mervin Bick a former-warden at the Nature Seychelles run Cousin island special seserve was working on a boat travelling near the edge of the Seychelles Plateau. He spotted a hawksbill turtle that had a shiny tag on it which made him curious.

From experience Bick wondered if the same tag matched the ones that he had seen and used to tag turtles while working on Cousin monitoring turtles and sea birds.

They say old habits die hard, out of curiosity Bick got close to the turtle and recorded the number inscribed on the tag. When Bick returned to Mahe he passed this information to the Nature Seychelles head office team based in Roche Caiman.

This chance report by Bick triggered a chain of events as the staff of one of the leading not-for-profit conservation agencies in Seychelles pored over records and files trying to trace the origins of the tag.

For the better part of their lives sea turtles have remained elusive and mysterious especially when it comes to their movements. This is because much of their lives is spent underwater. It is this enigmatic nature that captured the curiosity of scientists.

Previously female turtles landing on beaches to lay their eggs were a crucial part of the ocean food chain.

“The Hawksbill turtle feeds on sponges, a coral reef species. By eating the sponge they ensure that the fast growing sponge does not take up too much space on the reef, allowing for corals to grow,” says April Burt of Nature Seychelles.

“Corals are the base of food and nutrient flow on a reef and it is very important that they have space to grow and colonise.”

According to Burt in the quest to understand animal and bird behavioural ecology is what inspired the tagging invention.

According to Nature Seychelles records the first tag to be applied to turtles in Seychelles was in 1973 on Cousin Island Special Reserve. Thereafter, turtle tagging was done on Curieuse, St Anne, Aride, Cousine and Denis islands.

Burt explains that tags have proven to be useful in “providing information about female turtles’ nesting habits.”

The  International Union for Conservation of Nature (IUCN) Red List has indexed Hawksbill turtles as critically endangered. This listing has seen scientific resources deployed in order to understand their nesting habitats, foraging habits so as to define protection boundaries and best conservation practices for the species.

“To date none of the metal tag numbers have been recovered from turtles outside the region from which they were tagged,” Burt says.

The expensive satellite tagging was trialed on five Hawksbills turtles from Cousin in 1998 with an aim of identifying nesting sites and foraging areas. The experiment made some startling findings as the turtles did not move more than 175km from the nesting beach nor ventured beyond the edges of the Seychelles bank.

As it turns out the records at Nature Seychelles revealed that Bick had stumbled on what is considered to be a conservation best practice and Seychelles turtles’ secrets.

The Hawksbill turtle that Bick had spotted was first tagged on Cousin Island on 18th November 2011 where it had nested at least 3 times.

“The location where Bick observed her was approximately 208km South East of Cousin Island. This record is the first of its kind and is congruent with the satellite study which shows that Hawksbills key foraging habitat is indeed within the Seychelles region,” says Burt of Nature Seychelles.

“These turtles are truly Seychellois and deserve to live free helping to protect the coral reefs within the region that are so vital to the Seychelles economy.”