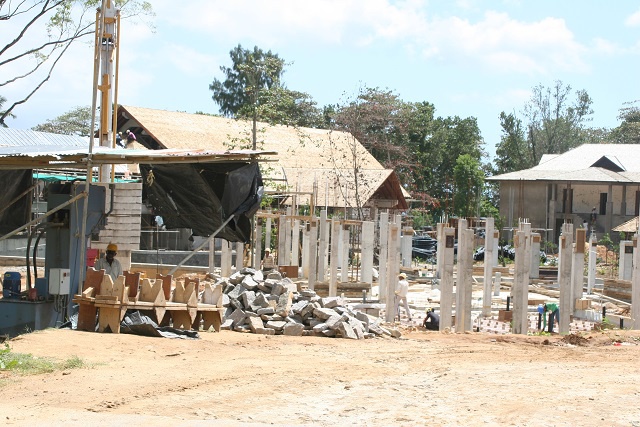 New hotel under construction at Belombre in the Northern region of the Seychelles main island of Mahe. The Seychelles Hospitality and Tourism Association said the budget for 2015 “will make our industry even more uncompetitive.” (SHTA)(Seychelles News Agency)

(Seychelles News Agency) - After two days of debate the Seychelles National Assembly approved the proposed budget for 2015 budget amounting to the sum of 5.9 billion Seychelles rupees (SR), equivalent to around $422 million, on Friday December 19.

The budget was presented by the Minister for Finance, Trade and Investment, Pierre Laporte on Monday last week.

When delivering his budget speech titled “Staying the Course toward Sustainability” Laporte told the assembly that new national policy measures would need to be implemented to keep the country on track to achieve a debt-to-GDP ratio of 49 percent by 2018.

He also announced a series of measures to target surplus revenue including placing an increase on taxes for cigarettes and alcohol, a 50 percent increase in government levies on the importation of privately-registered motor vehicles, increase in road tax amongst others.

There has been mixed reactions from the Seychellois public and a cross section of political leaders as well as private sector stakeholders over the 2015 budget.

The Leader of the Opposition in the National Assembly David Pierre said that the 2015 budget will increase the costs of doing business in Seychelles, burden the private sector, strain pensioners and discourage investors’ confidence.

According to an article published in daily newspaper Today in Seychelles, Pierre has urged the government to review what he terms as “unpopular measures” contained in the budget such as levies on cars.

“A car is no longer a simple luxury; rather it is an important tool for many workers and producers. By taxing cars even more than before, government is placing a burden on an important asset necessary for productivity in our country,” said Pierre.

He also called on the government to diversify the economy and to review investment related laws such as the Companies Act with a view of repealing them to meet the demands of a new Seychelles.

In his lengthy response, Pierre also called upon government to consider involving the National Assembly in the future budget making process as this will promote public inclusivity. He urged the finance ministry to reconsider the 2015 budget which he described as a burden to the Seychellois populace as it will stir up inflation and increase the costs of goods and services.

Expressing the same sentiment, the tourism sector’s main lobbying group the Seychelles Hospitality and Tourism Association (SHTA) has also expressed its disappointment in the budget as it does not provide incentives to support the sectors’ “operational and systemic challenges.”

The SHTA said the finance ministry’s 2015 budgetary proposals lack the necessary “stimulus to encourage growth of businesses or for the private sector to reinvest to ensure the continuity of their businesses.”

In a statement issued a few days after the budget’s presentation SHTA said that the budget for 2015 “will make our industry even more uncompetitive.”

“With escalating costs the new taxes will entail, those businesses who are able to will have no option but to cut down on quality and standards just to keep afloat.”

The association which represents over 140 tourism establishments in the country, stated that the industry has already seen a 5 percent decrease in its revenue for 2014 and forward bookings for 2015 has been slow.

“The government’s response has been to slam a struggling private sector with more taxes, which will drive up costs even higher and make it even more difficult to do business in Seychelles. It does not reflect the spirit of collaboration with which we as the private sector engaged with the government in at the four Cross Sectorial Ministerial Meetings and in the various technical working groups,” states the SHTA statement.

The Chairperson of the Seychelles Chamber of Commerce and Industry (SCCI), Marco Francis, echoed the same sentiment in an interview with SNA.

"There will be a decline in revenue for hotels that are in the process of lowering the price of the rooms, in order to have more occupancy. There is competition, because there are more beds available that demand," Francis told SNA.

"Next year new hotels will open their doors and although there will be an increase in the number of visitors, there will be strong competition," said Francis, adding that he would have liked the Seychelles government to reduce Value Added Tax on goods and services (VAT) from 15 to 10 percent to help hoteliers face this new challenge.

For her part the Leader of Government Business in the National Assembly, Marie Antoinette Rose, said for her the 2015 budget which she described as “sustainable and responsible is a renewal of the government’s commitment to offer the Seychellois people a better future and to maintain the country’s socio-economic gains achieved over the last over the past 37 years.”

"You cannot always get everything, we must also help to maintain our standard of living, pay our taxes….,” said Rose.

“Give and take is the new way forward…………..We cannot expect to only receive, in return we need to help ourselves, to give, to negotiate and to compromise.”

Health and Education are the two sectors allocated the biggest chunks of the 2015 budget SR 617.6 million ($44 million) and SR 479 million ($34 million) respectively.