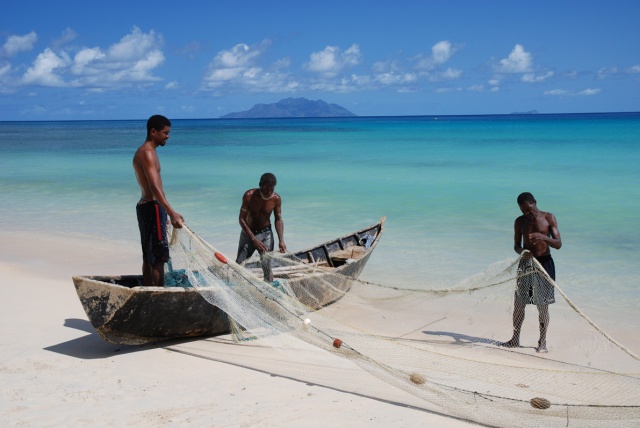 Seychellois fishermen bringing in their catch at Beau Vallon bay, Mahe island. Artisinal fisheries is an important source of livelihood and food for the Indian ocean islands, as well as for many small island states and coastal states of Africa (Gerard Larose, Seychelles Tourism Board)

(Seychelles News Agency) - The African Union has confirmed its commitment to the concept of the Blue Economy as a key point in developing the African continent. The Blue Economy drive is expected to be outlined in the AU’s Agenda 2063, a plan for African countries to work together to build a prosperous and united continent based on shared values and a common vision for the future.

The concept of the Blue Economy revolves around sustainable exploitation and development of the full potential of the world’s oceanic resources, and as Africa’s oceanic territory is greater in area than its actual land mass, the early adoption of this change in focus may prove to give the continent a boost in improving the economies of some of the poorest states in the world.

The idea got the nod after a request for inclusion by Seychelles Vice President Danny Faure at the 22nd Ordinary Session of the Assembly of Heads of State and Government of the African Union in Addis Ababa, Ethiopia. The Vice President called on the AU to use its Agenda 2063 to recognise the potential of sustainably developing Africa’s oceans.

“The Blue Economy, encapsulating all of the potential of our oceanic resources, offers us a platform for Africa’s transformation both in terms of Agenda 2063 and in terms of the post-2015 Development Agenda and the sustainable development goals,” said the Vice President during an intervention, according to a statement from the foreign affairs ministry.

The Chairperson of the African Union Commission, Dr. Nkosazana Dlamini-Zuma, later confirmed that an entire chapter of Agenda 2063 would be dedicated to the Blue Economy concept.

Dr. Dlamini-Zuma is no stranger to the Blue Economy, after she discussed the concept on an official visit to Seychelles President James Michel in June 2013 as a special guest of the island state’s National Day celebrations.

The Vice President headed the Seychelles delegation to the African Union Summit, held from 30-31 January, under the theme of “the Year of Agriculture and Food Security for Africa”.

Speaking at the Summit, the Vice President said he was pleased at the theme’s selection, and added that Africa’s islands needed greater maritime connectivity on the continent.

“Food security is a critical issue for islands as we are simultaneously limited in the amount of food we can produce ourselves due to our small size, while also being isolated from key markets in terms of imports,” he said

Inequality in accessing vaccines is not acceptable, says Seychelles' President