The biggest and best Christmas gift: A holiday in the Seychelles islands 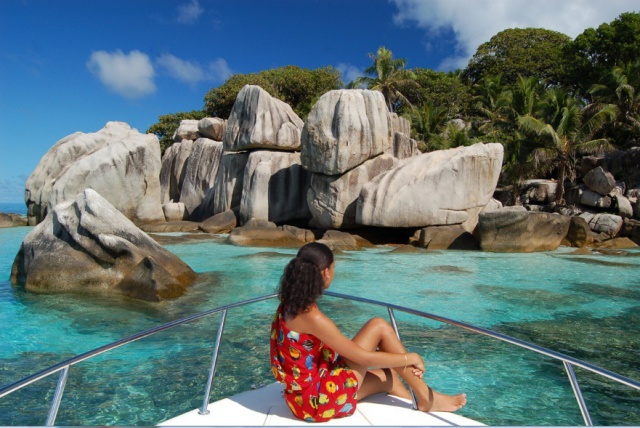 A dream come true, a holiday in the Seychelles islands (Gerard Larose, Seychelles Tourism Board)

(Seychelles News Agency) - While some tourists head for the ski slopes of a snow-filled Christmas holiday, up in the mountains of a country somewhere north of the equator, others flee the cold and grey skies and escape away south near the equator to the soaring heat of the tropics, like the Seychelles islands in the Indian Ocean

Some even see a holiday to the islands of the Seychelles as the perfect Christmas gifts for loved ones, at this joyful time of the year.

At least that is what first time visitor to the Seychelles Fadi Hammadeh said he was doing when he was approached by an SNA journalist on the island of Praslin, the second most inhabited island of the Seychelles, on Christmas Eve.

‘I wanted to go on an island. I have been before to the Maldives but wanted something more eventful and exciting’, said the Dubai resident, who is travelling with his Londoner wife and three kids.

‘Christmas is not really celebrated in Dubai and all this celebration over here brings so much childhood memories to my wife’.

The trip is a double celebration for the family, as it is their first holiday to the Seychelles as well as being the first time they spend Christmas away from home.

Russian Maria Lebedeva, normally celebrates Christmas in January according to the Julian calendar, as she is an Russian Orthodox Christian, ‘but I love the feeling of people coming together on Christmas’, she exclaimed.

‘The whole family has been enjoying themselves in the warm weather’, she added.

She is accompanied here by her husband and their four year old daughter.

Anonymity and a peaceful existence are also an essential part of the Seychelles holiday experience, as exacted by a Swiss couple who said ‘Christmas under the palms is better….far away from the hassle of the cities’.

They were spotted observing the sunset on the tiny island of La Digue, the third largest island of the Seychelles group, renowned for its tranquility and traditional ways, where most people use bicycles for transport on the island, and where the famous Anse Source D’Argent beach is found, ranked by CNN.com as the 4th best beach of the World's 100 best beaches.

The increased presence of visitors from around the word at this special time of the year means hotels of the islands get involved in making the holiday a special one, bringing Christmas cheer to them, with a touch of Creole culture.

They each find different ways to accommodate their guests, stretching from specially prepared menus, to a host of activities expressly organised for the children, to make the Christmas away from home extra special.

"Christmas is the busiest time of the year for us," said Raffles Seychelles General Manager Christoph Ganster.

"Many people choose a quiet location to spend the festive season, and what better place than in the Seychelles!’" said the smiling Ganster, who runs the luxurious five start hotel at Anse Boudin, Praslin overlooking the beach.

‘We strive to bring our guests a Christmas experience similar to one spent at home…but in the Seychelles”, he explained.

A special menu comprising of flat quiche with mushroom, accompanied by Gluweim Red Wines (traditional Christmas wines) served on ice, was the serving of the day, when our journalist visited the hotel.

Also on offer were ginger bread cakes in a mounted ginger bread house, with Christmas pudding, vanilla cookies, and cinnamon all on sale at the hotel.

But while tourists enjoy the hotels’ fine dining for the special occasion, most of the 90,000 people of Seychelles started their Christmas celebration at a midnight mass last night, at majority of the Christian churches of the Indian Ocean islands.

Christina Rossmeier of Germany attended the midnight mass at St Mary’s church of the Roman Catholic parish on La Digue, and she was mesmerized by the service.

‘We (she was accompanied by her husband) were very much surprised to find most people dressed in red”, she recounted.

“We liked it. It was a happy Christmas evening, so much fun and so much movement, as a delightful choir sang Christmas’, she reflected.

"Usually at home we will have a huge breakfast followed by a huge gathering with lots of food and drinks. Here we are going to have a small breakfast under the sun, but we think it is really worth to try a new thing."

“Our biggest gift is this journey to the Seychelles”, concluded the German tourist.

The sentiment was shared by French national Sylvie Fontaine, also taken by the appeal of these islands even if it meant spending Christmas away from home.

Asked how she found the Christmas mass, she answered, "very lively with songs that got everyone involved…It was beautiful..compared to France, here it’s a joyful event."

Asked how she is going to spend Christmas, Fontaine says "with the family…discovering the island and its beauty. It is the greatest Christmas gift we have ever given ourselves."

Christmas, the celebration of the birth of Jesus Christ on December 25, in Seychelles is celebrated by the majority of the population.

According to the National Bureau of Statistics 76.2 percent of the Seychelles population of around 90,000 people is Roman Catholic, 6.1 percent Anglican, 2.4 percent Hindu, 1.6 percent Muslim, and 13.7 percent other faiths.