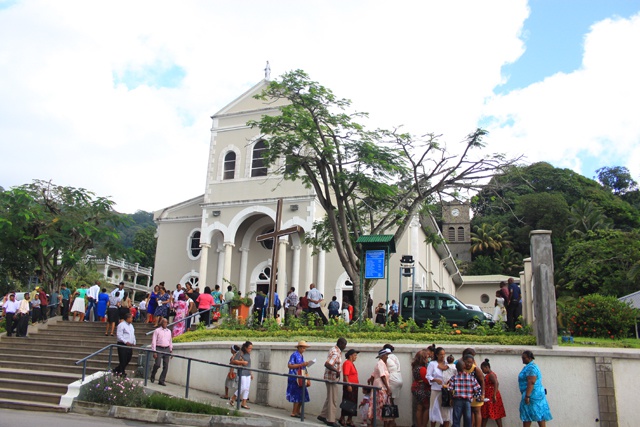 Believers making their way to the Cathedral of Immaculate conception in the Seychelles capital of Victoria for Christmas Mass this morning. (Joe Laurence, Seychelles News Agency)

(Seychelles News Agency) - Christians in Seychelles are today joining with millions of believers worldwide to celebrate the birth of Jesus Christ - Christmas Day.

Religious services with a special focus on the meaning of Christmas were celebrated last night as well as this morning by the Catholic, Anglican and other Christian faiths in the Indian Ocean archipelago.

Father Daniel Kallee led the 9.30 am mass at the St Paul’s Cathedral in the Seychelles capital of Victoria which followed an earlier mass celebrated by the Bishop of the Anglican Diocese of Seychelles the Right Reverend James Wong.

In his Christmas message this year Wong described the message of the nativity of Jesus as “An Enduring symbol” adding that “Christ’s birth has been a powerful story throughout the ages.”

“The Nativity is a three dimensional representation of that timeless story and an enduring symbol of faith, hope, and love for Christians around the world. The Nativity has also developed into an international art form with a universal message that speaks to people of all faiths and cultures. It is a story of family, new beginnings, the miracle of life, and a spiritual presence,” reads Wong's message.

Talking about the family the Anglican Bishop called on the fathers to follow the example of Jesus’ earthly father Joseph who cared for each member of his family and showed responsibility in anything he did.

For the mothers Wong reminded them to follow the example of Jesus’ mother Mary who agreed to be used by God and to guide his son in faith. And for the children he stressed on Jesus’ obedience towards his parents.

Wong has called on believers to take this time as they are celebrating Christmas to take the time to thank Jesus for his coming and to welcome him into their home and hearts.

“…….we are not only members of our respective human family; we are also members of the family of God, a community of faith. As such let us all take our responsibilities to make the Church in Seychelles grow with the message of the love of God as Jesus did during his earthly life…… Remember at this Christmas that a new beginning in faith for a better family is possible if we take our responsibilities seriously,” concludes Wong's message.

Not far from the St Paul’s Cathedral in Victoria, a large crowd of Roman Catholic believers also gathered at the Cathedral of Immaculate Conception for Christmas Day Mass this morning which was led by the Bishop of the Catholic Diocese of Seychelles Denis Wiehe.

Wiehe’s message for Christmas this year called on believers to focus on the origin of the Christmas message which is “Unto you, a Saviour has been born – The Lord Jesus Christ” if they want to receive the real joy and peace that Christmas brings.

Wiehe also urged Roman Catholics in Seychelles to read a letter issued by Pope Francis after he was elected titled “The joy of the Gospel” which sets out what he wants to accomplish during his tenure as the head of the world's 1.2 billion Roman Catholics.

“I invite you not only to read the letter but to also live the Gospel like Pope Francis, for it is through this that we will find the true source of the joy that was announced by the angels in Bethleem and proclaimed by Jesus Christ in the Gospel,” says Wiehe.

The Roman Catholic Bishop has also spoken about the peace that God wants to give to each and everyone at Christmas which he says is not the same peace that is talked about in everyday life.

“………The peace that comes from God is more than 'do not make war' and more than the inner and outer peace when one is 'relaxed'. Through his peace God gives us the fullness of life. Receiving this peace is to receive Jesus, the child born in a manger, who said: "I am the way, the truth and the life.”

The majority of the Seychelles’ population of around 90, 000 celebrate Christmas.

According to the National Bureau of Statistics 76.2 percent of the Seychelles population is Roman Catholic, 6.1 percent Anglican, 2.4 percent Hindu, 1.6 percent Muslim, and 13.7 percent other faiths.

Christmas day is one which most people in Seychelles have family reunions to share a special meal together as well as the exchanging of gifts.

While the Roman Catholics, Anglicans and other Christians are celebrating Christmas today the Orthodox Christians in Seychelles and worldwide will celebrate Christmas on January 7, 2015.