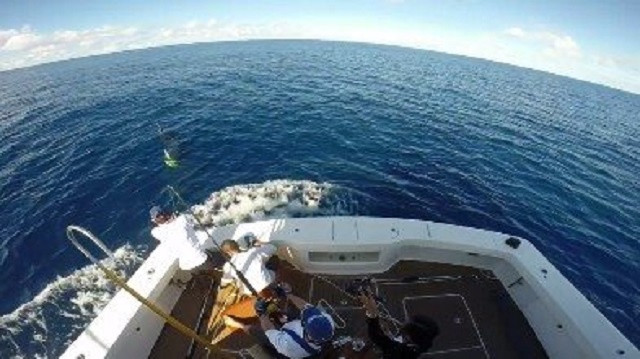 The battle of more than five hours between huge blue marlin and captain Ken Adcock and his crew was recorded off the south east coast of Mahe, the most populated island of the archipelago. (SSFC) (Photo License: CC-BY)

(Seychelles News Agency) - A blue marlin thought to be a Grander, a fish weighing more than one thousand pounds or about 454 kilograms, was nearly caught in Seychelles waters on Christmas Eve.

The Seychelles Sports Fishing Club shared evidence of the Grander this week in a video of a blue marlin majestically jumping above the sea struggling to dangle free of an 80lb fishing rod with three men, scarcely able to contain their joy, laboriously trying to haul the giant fish in.

Posted on the Seychelles Sports Fishing Club YouTube page and on its Facebook page, the video has created a buzz amongst big game fishing enthusiasts of the Indian Ocean islands and across the world, estimating that the fish could have weighed more than one thousand pounds.

Speaking to SNA, the secretary of the SSFC, Grant Heyer, says ‘it is very likely this fish was in the 1000lb category based on review of the video footage and how high it jumped above water…’

Unfortunately, after more than five hours of battling the monster was able to break free from the reigns of Ken Adcock and his crew, and swim free off the south east coast of Mahe, the most populated island of the archipelago.

Had they been lucky to pull the fish onboard, the catch would have very likely placed the Indian Ocean Island in the World Grander Club that recognizes efforts of crews around the world in catching one of the largest catches in big game fishing ; such as a marlin over one thousand pounds in weight.

Already blue marlins weighing more than one thousand pounds have been recorded on the website from countries such as Australia, Hawaii, Kenya, amongst others.

Amongst many comments on the club’s Facebook page, is that fish of that size have been caught before in the Seychelles archipelago but never recorded and the club is urging fishermen and fishing enthusiasts to ‘ bring [the fish] in…weigh it and then it is physically confirmed.’

However debatable the size is, the close-call of the blue marlin has been registered in the world wide group of blue marlin weighing 500lbs and more on the website of the World Grander Club.

This is Seychelles 2nd entry into this notable club in the month of December alone, with a 550lb black marlin caught by Francois Jackson of Tango 2 at the beginning of the month and weighed in the capital of Victoria.

“Catching this size of blue marlin is exciting because SSFC will be encouraging teams to enter the Blue Marlin World Cup which is a worldwide event held on July 4, 2015 requiring a catch of a blue marlin over 500lbs to qualify a team to be declared the worldwide champion,” Heyer added.