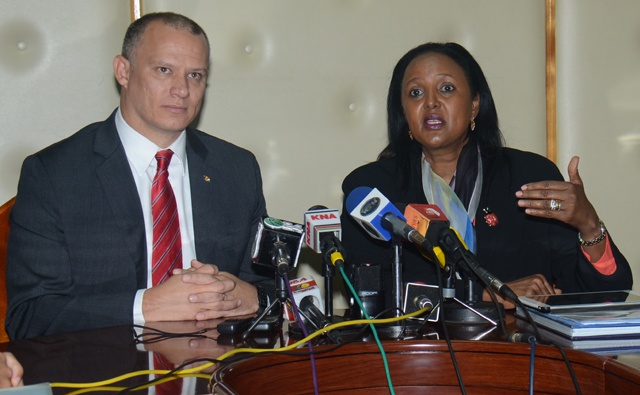 (Seychelles News Agency) - Easing of trade between the Seychelles and Kenya is possible now that the neighbouring countries signed a double taxation avoidance agreement (DTAA) on Monday, according to a statement issued today by the Seychelles Ministry of Foreign Affairs.

With the tax treaty now in place, reinforced with the current visa exemption, trade experts have estimated that trade flows between Seychelles and Kenya will increase up to tenfold, and as Kenya is setting up a free trade zone, knock-on opportunities exist to do business with the wider Common Market for Eastern and Southern Africa (COMESA) region.

The DTAA was signed between the cabinet secretary of Kenya’s National Treasury, Henry Rotich, and Seychelles’ Minister for Foreign Affairs, Jean-Paul Adam while the latter was on an official visit to the East African country.Work on the agreement began at a technical level in 2011.

Also present at the signing was the Kenyan cabinet secretary for Foreign Affairs, Amina Mohamed, who said the agreement as a “means through which a proper environment is being established for our investors to invest and trade with one another other on a more frequent basis and with greater ease.”

The Seychellois delegation, which included the chairman of the Seychelles Chamber of Commerce and Industry (SCCI), Marco Francis,met with representatives of the Kenyan private sector and agreed to establish a Seychelles-Kenya business forum to further explore opportunities around industries such as tourism, fisheries, the Blue Economy concept and increasing imports and exports between the two countries.