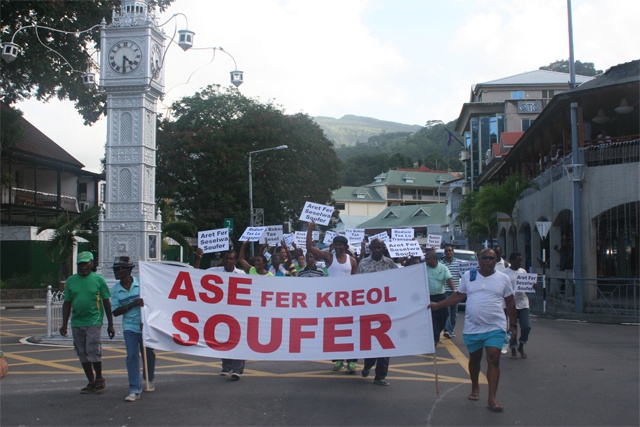 The protest march against the rising cost of living in the centre of Victoria, yesterday afternoon. (Seychelles News Agency)

(Seychelles News Agency) - More than a hundred people marched through the streets of the Seychelles capital of Victoria yesterday afternoon, in protest against the rising cost of living.

The protests march ‘over excessive taxes’ was called for by the Seychelles National Party (SNP), one of four registered opposition parties of the Indian Ocean archipelago of 115 islands with a population of around 90,000 people.

Those who took part carried banners which read ‘too much taxes in Seychelles’, ‘reduce taxes on vehicles’ etc….

One of the protestors John Servina who is a truck driver expressed his concerns regarding the increase in taxes to SNA.

"Next year, I will have to increase the fees that I charge for my trips and pass on the taxes to the consumers," he said.

Earlier this month in his budget address before the Seychelles National Assembly the Minister for Finance, Trade and Investment announced a 50 percent increase in government levies on the importation of privately-registered motor vehicles.

He also announced an increase in road tax and the doubling of vehicle testing fees in 2015.

"This event is mainly to protest against the increase in new road tax, this will result in an increase in the cost of living for all Seychellois, as the price of goods will increase," the leader of the SNP, Wavel Ramkalawan told SNA at the start of the protest march yesterday.

"Through Facebook, we have received a lot of support, as you know in Seychelles, people are not really into protests. Next year, we will organize a series of activities as the electoral reforms are completed," added Ramkalawan.

"Right now, life is really hard for all Seychellois and this budget will not help to reduce the gap between rich and poor, and the gap will even widen."

The protest march is the first political event organised by the SNP after having boycotted the legislative elections that took place in 2011.

Lebanon president to discuss security after days of protests