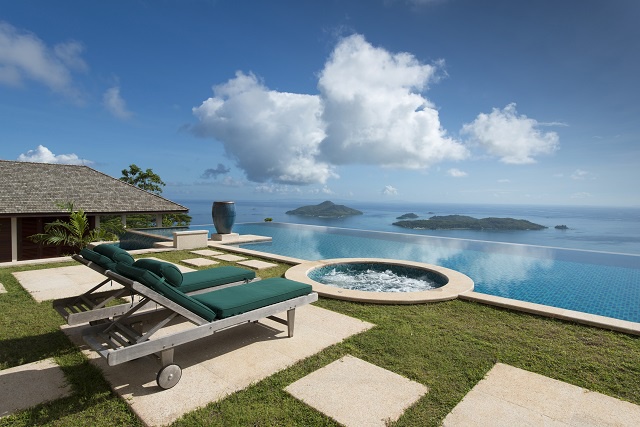 The projects submitted are first judged on a regional basis after which the best are eligible to represent their respective regions and stand a chance to win an International Property Award.

Eden Luxury Apartments received a 5 star award for Best Architecture: Multiple Residences in the Indian Ocean archipelago.Built on reclaimed land just off the Seychelles main island of Mahé, the self-catering holiday apartments are equidistant between the capital of Victoria and the international airport.

North Island Resort revealed as the most expensive hotel in the world at an average cost of $6,695 per night, according to a survey conducted by Travelmag.com in June this year, won a Highly Commended accolade for Mixed-use Interior in Seychelles.

A Highly Commended award for Hotel Architecture in Seychelles was given to the Dhevatara Beach Hotel, a luxury hotel at Grand Anse beach on the Seychelles’ second most populated island of Praslin.

The architectural firm behind the design of Royal Palm Residences situated at La Misere, a hillside area some 10 minutes’ drive from the Seychelles capital of Victoria, is ADD. locus architects, that has offices in London, Tokyo and Seychelles.

The firm is also behind two other projects that won prizes at the International Property Award this year; the Eden luxury apartments and Dhevatara Beach Hotel.

“All of this bodes well for the future homeowners and is also a huge credit for Seychelles as a whole, showcasing the country’s ability to deliver high end residential properties capable of matching the best across the globe,” ADD. locus’ Managing Director Alex Ellenberger told SNA in an email.

Ellenberger who is also the Managing Director of the company behind the Royal Palm Residences said “it is a great boost for our project to be recognized at this level by international property professionals at such an early stage in its existence.”

According to a press statement issued by the International Property Awards entries were received from companies in 13 African countries for this year’s awards.

The judging committee was chaired by three members of UK's House of Lords who scrutinised hundreds of entries that had been submitted.

Two awards were presented to the winning entrants who were rewarded with a ‘Highly Commended’ or ‘5-Star’ award.

The 5-star winners were then slotted for a second round of judging to select just one from each of the 50 different categories that were eligible to represent Africa at the prestigious 2014-2015 International Property Awards (IPA).

Over 80 experts drawn from diverse property disciplines judge all the entries submitted from all over the world. Rolls Royce Motors, Maybank, Gaggenau and Smeg are the main sponsors of the awards.

Other regional winners drawn from Arabia, Europe, Canada, the Caribbean, USA, Central & South America, the UK and Asia Pacific were also announced on the same evening as the race to find the ultimate World’s best in each category intensified.

“Levels of excellence and innovation continue to rise within the property industry year after year, making the attainment of one of these awards increasingly difficult, yet even more valued,” said IPA’s President Stuart Shield.

IPA which is open to residential and commercial property developers across the world has since 1995 recognised the highest achievement in four main sectors of property and real estate revolving on development, architecture, interior design and real estate.