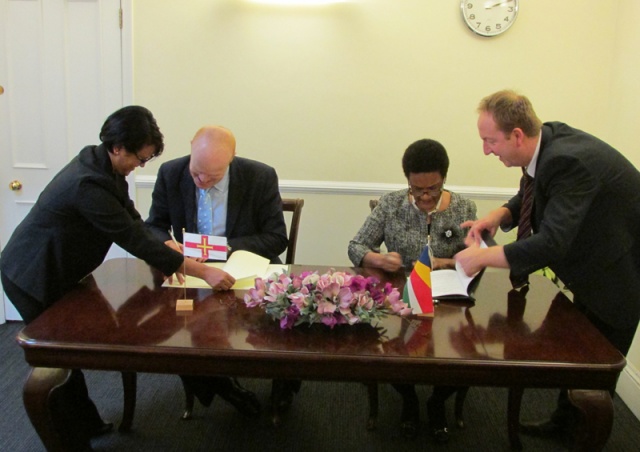 (Seychelles News Agency) - Businesses based in the Seychelles and Guernsey will no longer need to pay tax in both places following the signature of a double taxation avoidance agreement in the Seychelles' London embassy, according to a press statement from the Seychelles finance, trade and investment ministry on Friday. It also covers prevention of tax evasion on income.

“It provides an inducement to nationals of both countries to focus their attention on increasing trade and investment opportunities. The signing of this agreement will also further strengthen the existing good relationship between Seychelles and the State of Guernsey,” said Marie-Pierre Lloyd, Seychelles’ high commissioner to the UK and Northern Ireland.

According to the statement, Seychelles and Guernsey wish to explore possibilities of expanding bilateral cooperation in other fields and that Guernsey has expressed interest in the Blue Economy concept, which Seychelles has spear-headed since 2012.The Blue Economy concept refers to the development of economic potential of marine-based tourism, fisheries and other coastal and marine resources.

Guernsey has also shown interest in oil exploration in the Seychelles archipelago.

The Seychelles ministry of finance told the Seychelles News Agency that the Indian Ocean island nation has so far signed 19 double taxation avoidance agreements and that the number is expected to reach 24 by end December 2014.

Opening up and easing trade between the Seychelles and other nations is part of the country’s efforts to modernise the economy, following IMF-backed economic reforms launched by Seychelles President James Michel in 2008.

In December 2013 the International Monetary Fund said in its Survey Magazine that Seychelles had completed five years of 'successful economic transition.' In the analysis, the IMF described the island nation's leap from an interventionist economy, debt crisis and shortages of goods, to a market-based economy, full employment, fiscal surpluses and rising reserves.