A shaky start to 2015 as heavy rain hits Seychelles capital 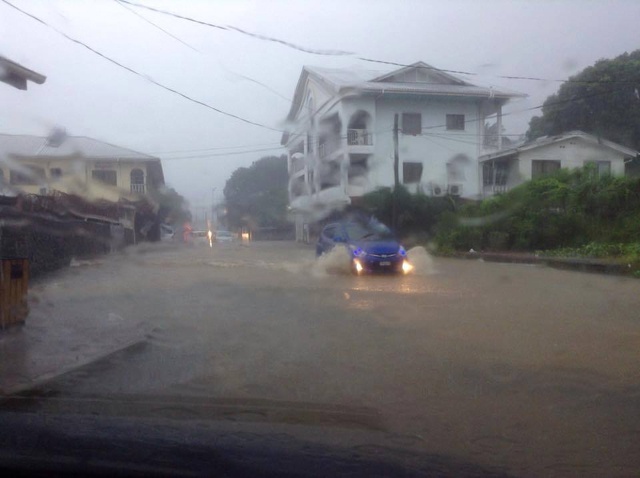 A car navigates its way through the floodwaters of Mont Fleuri, one of the busiest districts in the capital city of Victoria, Mahe on Saturday evening (Derrick Young Khon, Pure FM Seychelles)

(Seychelles News Agency) - After an entire day of heavy rainfall on Saturday, it was with relief that the 90,000-strong population of the Seychelles caught a glimpse of sun on Sunday morning, on the fourth day of the New Year.

The heavy rainfall affected mainly one of the central districts of the capital of Victoria, Mont Fleuri, on the main island of Mahé, overflowing drainage systems and flooding houses and streets in the area.

In other areas near the capital, a few other minor incidents were recorded, but on the whole, businesses and tourism establishments have continued with their daily activities unaffected.

As of 12:00 in the afternoon, the floodwaters in Victoria had receded and traffic was flowing normally, despite occasional light showers.

The inclement weather is expected to continue until Tuesday, according to weather forecasts.

Speaking to the local national television, the Seychelles Broadcasting Corporation, the Division of Risk and Disaster Management’s director-general, Paul Labaleine, said officials had been on alert since December as the local meteorological services had predicted heavy rainfall during the festive season.

“We had informed all our partners and we were prepared for yesterday’s sudden event,” said Labaleine, adding that the emergency services in the Mont Fleuri district were dispatched immediately to affected areas as officers on the ground informed them of incidents as they happened. These were mainly fallen rocks, landslides and overflowing rivers.

Being a tropical archipelago of 115 islands, Seychelles experiences light showers throughout the year although heavy rainfall usually concentrates in the month of November to March or what is called the North-West monsoon.

January in particular often sees heavy rainfall in the region, and in January 2013, heavy rains resulting from tropical cyclone Felleng caused severe flooding and landslides in the Seychelles, costing the country $8.4 million in damages.

According to the Seychelles Met Office, the country’s total average rainfall for January is around 400mm.

Last year, the islands experienced one of its worst flooding incidents during the month of February which affected several areas.

(posted 4 December 8pm): According to an interview aired on local national television, the Division of Risk and Disaster Management Director-General Paul Labaleine confirmed that since Saturday DRDM had received over 60 reports of small landslides and flooding, mainly in the Mont Fleuri district of the capital Victoria.

According to Labaleine, the area which officials consider to be most at risk is the suburb of Foret Noire, where a large boulder is reportedly slipping down a hillside, placing five houses below in danger. Disaster response teams are currently working on the situation to try to prevent further damage and the families living there have been evacuated.

The Seychelles Met Office says the weather should improve by Tuesday.