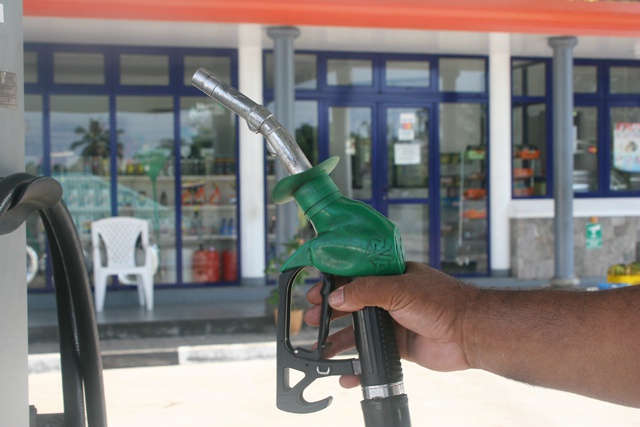 Nozzles up! Motorists in Seychelles will be feeling a little relief in the pocket for at least the next few weeks to come, say authorities (Seychelles News Agency)

(Seychelles News Agency) - As in many other countries around the world, motorists in Seychelles are savouring the rare experience of falling fuel prices. And according to authorities, it looks as though this trend will continue, at least over the next few weeks.

In the archipelago of 115 islands in the western region of the Indian Ocean, one litre of petrol is currently sold at 20.01 Seychelles Rupees (SR) or $ 1.40 at petrol stations. The islands’ fuel requirements are supplied every six weeks by tanker.

"Two factors are responsible for the decrease in fuel prices; first there is the price at which oil is sold at international level, but also the rupee currency regained a part of its value against the dollar, and that has also helped to reduce the price of petrol," Conrad Benoiton, the managing director of the Seychelles Petroleum Company (SEYPEC), told SNA.

Since July, the decline in the oil price has been due to several factors.

According to some analysts, an overproduction of oil is one of the causes, in addition to a lacklustre demand due to contracting economies in the Euro Zone and China.

Other experts, however, have postulated that the falling oil price is an agreed strategy between the United States and Saudi Arabia to crash the oil price with the intention of crippling oil-producing Russia’s already beleaguered economy in an attempt to force Russian President Vladimir Putin to cease all involvement in the Ukrainian conflict.

In July a barrel of oil was sold for $ 112, it currently costs less than its equivalent volume in bottled water, or about $ 55.

Regardless of the reasons behind it, the knock-on effects of the falling fuel price might mean that the price of imported goods could also decrease, as Seychelles depends on importation for around 90 percent of its consumable goods.

"When you look at the entire fundamental economic picture, it is expected that fuel price will continue to decrease in the following weeks in Seychelles," said Benoiton, although he noted that the price of oil was still vulnerable to unforseen global events and other external and industry factors.