All aboard for the islands! Cruise ships flock to Seychelles in 2015 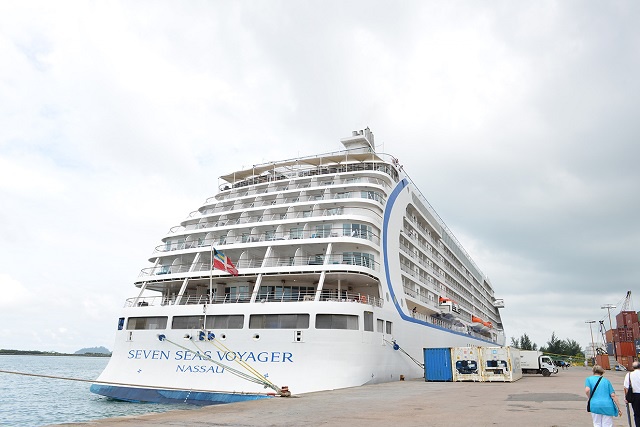 The Seven Seas Voyager is one of the large cruise ships that have docked at Port Victoria do far this year, indicating that 2015 will see an increase in the number of cruise passenger arrivals to the islands. (Ministry of Tourism and Culture)

With the piracy threat of previous years in the waters surrounding the Gulf of Aden greatly reduced, luxury cruise liners are now making the Seychelles a prime destination of choice for 2015.

Tourists from all over the world who like to take their travel adventures a little slower than the conventional jet set have made the secluded powder-white beaches and historical attractions of the Seychelles one of the most desired destinations of choice.

According to a press statement issued by the Seychelles Ministry of Tourism and Culture, the 115-island archipelago situated in the calm tropical waters of the western Indian Ocean has made a good start to bringing in cruise tourism in the new year, with three large cruise ships having already docked in Port Victoria since the beginning of 2015.

Around 1,400 passengers and 1,100 crew members in total have called at the port in the passenger ships ‘Seven Seas Voyager’, ‘COSTA Neo Classica’ and ‘Island Sky’, which all berthed in port over the last few days.

After arriving at the bustling port of Victoria, visitors are greeted at a special reception area, accompanied by traditional music and dancing from the islands.

The passengers can then be whisked away on tour buses to be guided through lush and scenic granitic mountains and beach-side scenery as well as walking tours of the islands’ tiny but friendly capital of Victoria.

Another luxury liner, the 686-passenger ‘Azamara Journey’ has announced the start of a new highly-anticipated route from India to Seychelles, Maldives and Sri Lanka in April 2017, according to USA Today.

Tourism officials in Seychelles have been working with the Seychelles Ports Authority to attract more cruise liners and super-yachts to the islands, and the vessels are being encouraged to also call at other islands in the archipelago such as Praslin and La Digue to provide more attractions for the visitors.

Tourism » Be a reporter: Write and send your article » Subscribe for news alert
Tags: tourism, Ministry of tourism and culture, cruise ships