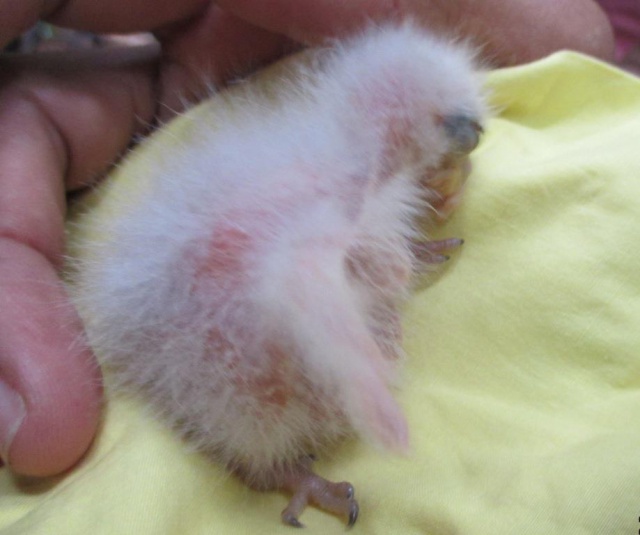 A succesful breeding season for a vulnerable species? The Seychelles Island Foundation says they have to wait until the season ends in March. Until now, 12 of 39 black parrot eggs have hatched in the UNESCO World Heritage Site, Vallee de Mai on Praslin but already, two of the chicks have died. SIF is now waiting for the 17 remaining eggs to hatch. (Seychelles Island Foundation)

(Seychelles News Agency) - As the northwest monsoon in the Indian Ocean Island of the Seychelles enters its third month, a handful of fluffy white-feathered chicks will start their ever-continuing battle for survival in the UNESCO World Heritage site of Vallée de Mai, located on the second most populated island, Praslin.

Conservationists hope that these little white balls of fluff with bulging eyes will one day soon mature into a rare endemic bird: the Seychelles Black Parrot (Coracopsis barklyi), which lives in the similarly vulnerable endemic coco-de-mer palm forest of the Vallée de Mai,home to the largest nut in the plant kingdom.

The awkward little chicks with their bulging eyes, huge beaks and baby feathers are seen as tiny steps towards the conservation of a rare endemic bird facing an uncertain future in its isolated territory.

It is estimated that there are only 520 to 900 parrots living on Praslin, one of the 115 islands of the Seychelles archipelago.

Although proudly recognised as the national bird of the small island republic, the species has been benchmarked globally on the Red List of the International Union for Conservation of Nature (IUCN) as vulnerable.

A promising year for a threatened species

News of the hatchlings of the black parrot was posted recently on the Facebook page of the Seychelles Island Foundation, SIF, which manages the UNESCO site.

According to SIF’s communication officer, Rowana Walton, 12 of 39 black parrot eggs have hatched so far, but sadly, two of the chicks have already died.

The team is now waiting to see how many of the 17 remaining eggs will hatch.

The black parrots’ nests are hidden in the pristine palm forest of almost 19 hectares of endemic plants, and their nesting sites of choice are usually hollowed-out trunks of dead coco-de-mer palm trees which grow naturally in this shady, moist valley with its red, nutrient-rich soil.

“It is too early to say how successful this breeding season will be,” Walton told SNA. “At the end of the last breeding season, the team recorded 12 fledglings out of 32 eggs that were laid. However, this is not an indication of a successful season as other factors such as survival rate and mortality needs to be taken into consideration.”

It is no wonder therefore that in spite of being somewhat erroneously named the black parrot, the tiny population of dark brownish-grey birds are fiercely protected by SIF.

Protection at all costs

Slowly, the chicks’ dark brown plumage will grow in, and after 45 days, they will make their first heart-stopping attempts at flight. Approximately two years later, they will reach reproductive maturity to begin the breeding cycle all over again.

Throughout their lives, the species is faced with several threats, mainly from the human development issues posed by the 6,000 inhabitants of Praslin.

“Invasive alien species such as rats and cats predate on the eggs and chicks and... have the potential to transfer diseases and are in direct competition with the parrots for nesting sites,” stated Walton, adding that forest fires, loss of habitat due to development and agriculture also destroys important feeding and breeding habitat for the parrots.

Among the introduced species on the islands, the Indian Mynah bird, an invasive and aggressive species, poses a real threat to conservation of the endemic birds and several countries have had to introduce eradication measures to control the bird.

“The team have recorded signs of predation by Mynah birds on Black Parrot chicks (through puncture marks seen on dead chicks in nests), and [they] have also been seen occupying nest cavities that are used by Black Parrots,” said Walton.

SIF posted on its Facebook page that they are in the process of conducting a survey to determine if the population of the Mynah birds have increased in the Vallée de Mai and “if any control needs to be undertaken”.

Another invasive bird species, the ring-necked parakeet, which is known in Creole as the ‘kato ver’, is also a cause of concern and authorities have recently stepped up their efforts to contain the species on the most populated island, Mahé.

As part of the campaign a team was also recently on Praslin “following up and trying to confirm the sighting of the RNP [ring-necked parakeet] reported there sporadically since September 2014.”

Walton told SNA that the reconnaissance team did not see any signs of the brightly-green coloured bird on Praslin, although she added that “this does not mean that there's no RNP there but further observations are needed.”

The team is expected to return to Praslin in mid-January.

In the meantime, anyone with information on ring-necked parakeets, either on Praslin or Mahé, are being asked to call SIF on 2523623.

Global biodiversity 'crisis' to be assessed at major summit