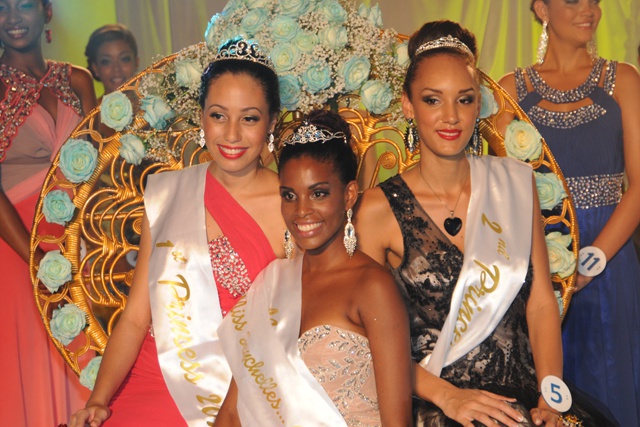 Camila Estico (middle) on the night she was crown as Miss Seychelles....Another World 2014. Lisa Rose (left) and Marvel Godley (Right) were also crowned First and Second Princess respectively. The search is on to find three beautiful women of the Seychelles to wear those crowns... (Jeona Bonnelame Seychelles News Agency)

(Seychelles News Agency) - The hunt to find the Seychelles islands’ loveliest young ladies to contest the Miss Seychelles… Another World 2015 beauty pageant is on. The pageant organisers have announced May 31 as the date when the winner will take the crown from reigning Miss Seychelles Camila Estico and go on to take part in the Miss World pageant later this year.

At a press conference on Friday, the chief executive of the Seychelles Tourism Board (STB), Sherin Naiken, encouraged young women between the ages of 18 and 24 to participate, saying that the pageant opened the door to many opportunities for participants, both at national and international levels.

“Participation in the pageant can help a girl develop herself at personal and professional levels, mould her character and build a career,” she said.

Naiken said that contestant entry forms are now available at STB and Tourism Ministry offices on Mahe, Praslin and La Digue. The entry forms have also been re-designed compared to previous years to better assess the contestants.

For instance, besides personal characteristics they are required to give details of any special artistic talents, hobbies, knowledge of languages, academic qualifications and their objectives for the next five years.

According to Naiken, contestants will be selected on a number of criteria, with more emphasis placed on individual talents, sporting interests and each applicant will be expected to come up with project proposals to benefit the local community, in line with the Miss World pageant’s objective of seeking ‘beauty with a purpose’.

A preliminary meeting will be held for all applicants, said the STB chief executive, and thereafter auditioning will take place, where the completed entry forms will also be taken into consideration and twelve finalists will be selected to take part in the pageant on May 31.

The finalists will be coached and trained over a three-month period, prior to the night of the pageant.

She added that although the swimwear segment of the contest would remain, organizers are looking into new ways of its presentation and it will no longer be a highlight of the pageant. The Miss World organisers announced that the traditional swimwear segment would henceforth be dropped, commencing with the 2015 Miss World pageant.

A Miss Seychelles to be proud of

Naiken noted that the 2014 Miss Seychelles, Camila Estico, whose project was aimed at healthy living and curbing obesity in the Indian Ocean archipelago of 90,000 inhabitants had quite an impact at national level and had also featured regularly in the media.

“At Miss World, Camila also made us proud, by reaching the quarter-finals of the talent segment. She was also very articulate and determined.”

Since being crowned, Camila has also been taking part in various activities, and Naiken noted that the contest was not only about “parading in beautiful outfits”.

Now on a drive to encourage as many young ladies with the right stuff to enter, Naiken says the STB is looking for girls who are ambitious and well-rounded.

The tourism board is considering boosting participation levels in the small island nation by sending out invitations to girls they believe have the potential to win the most coveted crown of all, according to Naiken.

Speaking to SNA, the STB’s director for events and conferences, Beryl Matatiken, admitted being aware that many of the Miss Seychelles contents are lacking in height. She noted that nearly all Miss World winners have been at least 1.70 metres tall.

However, Matatiken said that at the local level, it has been decided not to use height as a criteria, so as not to discriminate.

The competition will feature two sets of judges; one taking part in the elimination process and another panel for pageant night.

Usually, one or two panelists are chosen from among the main sponsors, while others are experts on beauty and fitness, while a former Miss Seychelles will also judge her potential successors.