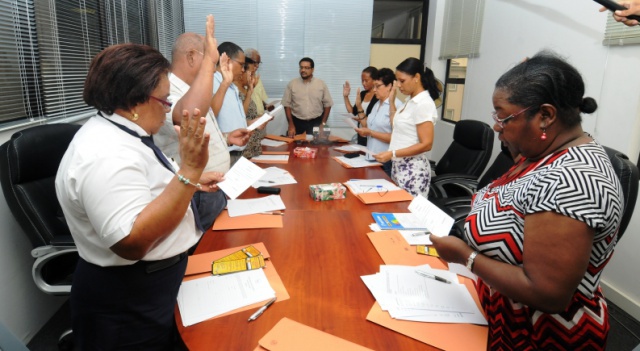 Electoral officers are sworn in at the Seychelles Electoral Commission at the beginning of the annual voter registration period. New amendments to the Elections Act that allow year-round registration and inspection of the voter's roll will only be implemented later this year. (Seychelles Nation)

(Seychelles News Agency) - The Electoral Commission in the Seychelles will begin today a national drive to register voters in the Indian Ocean archipelago off the east coast of Africa.

According to a press statement issued by the Electoral Commission, the national voter registration exercise for 2015 will be conducted at official registration centres on the main inhabited inner islands of Mahé, Praslin and La Digue until Sunday 25 January, providing a two-week window for registration.

This practice has been taking place in the archipelago of 90,000 inhabitants in the Indian Ocean for over 20 years.

New amendments to the Elections Act of 1995 which were passed in the National Assembly during December last year make provision for year-round voter registration and inspection of the electoral roll.

“The members of the Electoral Commission have not yet met to discuss the modalities for this change, but we plan on doing so during the year,” Gappy told SNA.

“For example, we have to find someone for this specific duty… so given for the moment we have not yet made provisions for all of this, we will for now continue as before,” stated Gappy.

As part of the revision of the electoral reform, several changes were made, this includes the rules for financing of political parties, the members involved in the executive committees of political parties as well as the time of the cooling off period.

Most of the changes are recommendations of the Electoral Reform Forum (ERF). The Forum is composed of members of the Electoral Commission (EC), representatives of political parties, the civil society as well as a representative of the Office of the Attorney General. Their debates took place over two years before the participants could reach an agreement.

There are three major political parties in Seychelles: the Parti Lepep which has been in power since 1977, and two of the main opposition parties are the Seychelles National Party and the Popular Democratic Movement (PDM).

“This is certainly an improvement that the people can now register at any time they want. Previously the voters list was often outdated and lacked credibility,” said the leader of the Popular Democratic Movement (PDM) David Pierre in an interview with the SNA.

Pierre believes the budget of electoral campaigning should be limited to 250,000 (around $18,000) Seychelles rupees (for the legislative election and 1 million rupees (approximately $70,000) for the presidential campaign.

A new provision in the electoral has also been made to enable the Seychellois living abroad to register and to vote. However this will require certain conditions.

For example, they should hold a national identity card and they must have spent at least three months in the country before they can register.

Another amendment made states that detained persons, either in holding cells or prisoners awaiting trial can also vote in elections, but convicted prisoners may not do so.

The three-day cooling off period before the voting day has also been modified so that door-to-door campaigning can take place but rallies, meetings and demonstrations will not be allowed during this period.

The new law requires all political parties to disclose all donations over 5,000 Seychelles rupees (about $300) as well as their expenditures to the Electoral Commission.

SNP to take part in 2016 elections

On Thursday last week, the Seychelles National Party (SNP), headed by Wavel Ramkalawan, announced its intention to contest the next parliamentary and presidential elections in 2016. The party had boycotted the 2011 legislative elections.

Speaking at the press conference on Thursday, Ramkalawan said he was largely satisfied with the 2014 amendments to the Election Act of 1995.

“On one hand, we have to acknowledge that there are some points which have been included in the laws which are positive and these include the voters’ register which will now remain open throughout the year and will contain only the names of persons eligible to vote, that is aged 18 years and over,” said Ramkalawan.

“The rights of persons on remand have also been respected and they will also be allowed to vote and the most important element of the reforms is that the cooling off period has been redefined to allow candidates to continue campaigning even on polling day.”

“On the other hand, it is unfortunate that the law does not put a limit on spending by political parties, so the purchase of votes will unfortunately continue,” said Ramkalawan, although such an allegation has never been proved before the Electoral Commission nor before a court of law.

As for the presidential election scheduled for 2016, Gappy said that under the constitution the Electoral Commission has a mandate to start the election process 90 days before the election.

This three-month process should normally start in the 57th month after the last presidential election, which would be between February and April 2016.