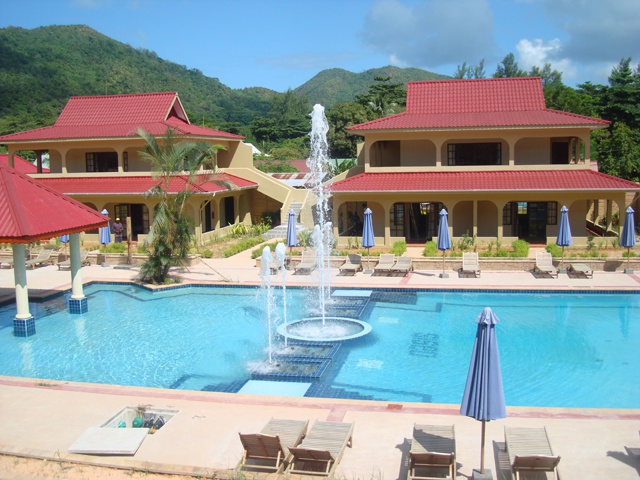 Thirty bungalows are nestled around the new Oasis Hotel's imposing pool in the centre of the courtyard (Joana Nicette, Seychelles News Agency)

(Seychelles News Agency) - With thirty bungalows laid out around a large swimming pool, the brand new Oasis hotel on the Seychelles’ second largest inhabited island of Praslin is expected to open for business soon.

To allow maximum airflow and light into the rooms, the polished wooden ceilings are set high, with the buildings’ roofing designed along the same traditional Creole lines which are scattered throughout the island.

Stepping into the lobby, one is struck by the open-plan spaciousness of the layout, with the restaurant to the right and the reception on the left. The high-backed chairs at the pool bar also offer a relaxed view of the surroundings while the reception is tucked into a marble bowl, over which towers the high ceiling with the hotel’s motif adorning the wooden slates.

With its striking oasis-in-the-desert theme, the décor features different shades of warm earth colors of brown and cream and the tinkling of water features remains a focal point in the main areas.

The most impressive of all the water displays is the one which cascades across almost the entire length of the swimming pool and is lit up in multicoloured hues and images at night.

The Oasis, which is owned by Seychellois-Indian businessman, Dr V. Ramadoss, is expected to increase the bed capacity available for visitors to the island, which is a mere 45-minute ferry ride or a 15-minute plane hop away from the main inhabited island of Mahé.

Situated at Grand Anse Praslin, the Oasis, which took some six years to come to fruition, has cost some 150 million Seychelles rupees, or just over $1 million.

Apart from a few remaining finishing touches which still remains to be done, the Oasis will start welcoming clients as soon as the relevant authorities have performed an official inspection.

The hotel restaurant and spa has replaced the former Casa Maestro owned by Seychellois Lesley André, who sold the property to Dr. Ramadoss. It was decided to build a brand new establishment instead of renovating the old one.

“It is always sad to demolish a building, but the former establishment did not have the features necessary for what we wanted to offer in our hotel, so we opted to go for an entirely new project,” Dr Ramadoss told SNA.

Ramadoss also owns and operates another small hotel, the Coco d’Or, on Mahé, the experience of which he says was the deciding factor in going for a smaller and more intimate establishment.

“Coco d’Or is holding its own, so we decided to stick with what we do well and go for a product which caters for family groups looking for an affordable holiday where the quality of services offered is real value for money,” said Ramadoss.

“The emphasis is and always will be to put the clients first whomsoever they may be and to provide service with a true smile.”

Dr. Ramadoss said he chose the name Oasis because it denotes safety, comfort and a haven to refresh and regain one’s energy.

“Just like an oasis is a place in the desert where there is water and palm trees and shade for the traveller, where he can rest a while and enjoy the comforts of life; in the same way we intend to be that cocoon of relaxation and pleasant comfort for our clients, whether they are Seychellois or visitors, hence the name Oasis,” he explained.

“We wanted to provide something different from what you see in tourism establishments here. We wanted something extra, which would at the same time attract and be fun for our clients especially the children and as water is a big part of our theme, we chose this,” Ramadoss said.

The power of choice

The thirty rooms of the Oasis are divided into three categories; standard, superior and deluxe. All three have their own luxurious bathrooms featuring both bath and shower, and the rooms also have their own balconies, built-in safes and flat touch-screen LED television sets mounted on the wall.

The deluxe suites come equipped with a small kitchen and are much wider than the already spacious standard and superior rooms. In every aspect, attention to detail has been maintained with the comfort of the client in mind, with the end result being subtly luxurious bungalows for the perfect holiday.

As all are laid out around the pool the ensemble gives an impression of cozy togetherness which is reinforced by the y-shaped steps which connect the bungalows and lead to the top floor deluxe suites.

Other than the restaurant and pool bar the front building also hosts two conference rooms and office space which will be rented out to service providers.

As the Oasis aims to offer a five-star service in a four-star setting it is also equipped with its own spa boasting a very big spa tub and spacious massage rooms. In addition to this, a sitting area all around the spa water display feature adds to the serenity and tranquil atmosphere.

Dr. Ramadoss has said that it is his aim to have a totally Seychellois team running the Oasis.

“We have openings for around 60 locals to work in this hotel and we have also provided very comfortable staff quarters at the back for their convenience,” he told SNA.

“Our target is to have the Praslinois themselves working in the hotel and I hope they will take this job opportunity to have a long-term career in our tourism industry.”