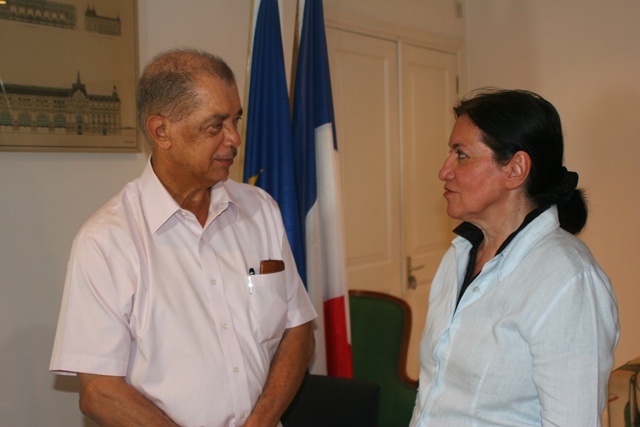 Seychelles' President James Michel greets the French Ambassador to Seychelles, Geneviève Iancu, on his visit to the French Embassy in a show of solidarity with the French people after the terrorist attacks in Paris, France.

(Seychelles News Agency) - The President of Seychelles, James Michel, this morning visited the French Embassy in a show of solidarity with the people of France after the multiple killings at the offices of Charlie Hebdo on 7 January.

According to a statement issued by the Office of the President this afternoon, President Michel wished to show support and sympathy in person to the French government and people.

Two gunmen forced their way into and opened fire in the Paris headquarters of satirical newspaper Charlie Hebdo, killing twelve and wounding eleven, leaving the nation reeling in shock and prompting worldwide displays of solidarity, united with the slogan “Je suis Charlie” (I am Charlie).

Upon arrival at the embassy, located at Mont Fleuri, a central district of the main inhabited island of Mahé, the president greeted the Ambassador of France, Geneviève Iancu, and then signed the condolence book.

In the condolence book, President Michel expressed a message of solidarity and determination to combat terrorism in all its forms.

“We bow to the memory of the victims of this heinous act and extend our heartfelt condolences to the families which have been affected by this cowardly and reprehensible crime but also to the government and French people,” he wrote.