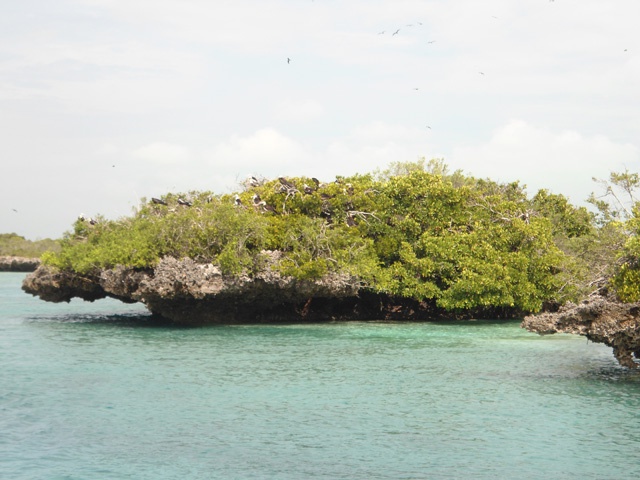 (Seychelles News Agency) - Cruises to Aldabra, the world’s largest raised coral atoll, with one of the finest tropical ecosystems, are finally being resumed from Seychelles’ main island of Mahe, now that the threat posed by Somalia-based pirates has abated.

Silhouette Cruises, a joint venture between the Seychelles group, Corvina Investments and foreign partners, started running a 15-day cruise at the end of 2014 with a vision of introducing a new eco-tourism concept for divers and visitors studying nature.

Aldabra boasts the world’s largest giant land tortoise population worldwide, estimated at 150,000, while the marine life in the lagoon teems with an almost incomprehensible variety of turtles, pelagic fish, rays and sharks.

The last surviving flightless bird in the Indian Ocean, the Aldabra Rail, is found there, as are many other unique land birds. It is also a vital breeding ground for turtles and seabirds.

Because of its unique biodiversity, Aldabra was declared a World Heritage Site in November 1982 by the United Nations Scientific, Educational, Cultural and Cultural Organisation (UNESCO).

According to Silhouette Cruises’ executive director Amit Wasserberg, the next cruise to Aldabra is scheduled to depart toward end of February, calling in at some other islands in the Amirantes atoll, which lies to the south of Mahé.

Presently, Silhouette Cruises, which was established in 1997, has a fleet of five vessels, combining the romance of sail with the charm of the world’s ultimate tropical islands.

Two vessels operate the expeditions to Aldabra and other more remote islands, while the rest run shorter cruises to the inner granitic islands around Mahé.

Wasserberg, who has resided in Seychelles since 1991, knows the islands intimately, having captained liveaboard vessels in the region for many years.

The Aldabra cruises are guided by Silhouette Cruises Chairman Adrian Skerett, who has authored several books on Seychelles and its natural history.

A variety of cruise options

Speaking to SNA, Wasserberg said the ‘Maya’s Dugong’, a 43-metre-long versatile vessel, that can be utilised for a variety of different maritime needs, is used for the Aldabra cruises. It boasts a large deck space, which can be used for scientific and long-distance expeditions, combined with the comfort of a modern yacht.

Depending on customer demand, it can be accompanied by the two-masted ‘Sea Bird’, which at 36 metres long, offers nine luxurious cabins.

Normally a direct Mahé-to-Aldabra voyage takes three to four days, but Silhouette Cruises offers other options which allow visitors to visit several islands while sleeping aboard the vessels.

“One of the most exiting aspects of an expedition cruise is the fact that natural events and sightings can help shape the journey. So it is expected that no two expeditions will be exactly alike, because weather, tides and chance encounters with nature will influence day-to-day activities,” he told SNA.

One option is travelling by boat to Aldabra, stopping at Alphonse, Cosmoledo, Astove and Assumption Islands and flying back to Mahé after 11 days from Assumption, which is 30 km away from Aldabra and has an airstrip.

The second option is to fly to Assumption before crossing over to Aldabra aboard the ‘Maya’s Dugong’ and ‘Sea Bird’, before continuing on to Cosmoledo and Astove and flying back from Assumption Island after seven days.

The third option is sailing to Aldabra and the Amirantes and returning by sea, a circuit which takes around 15 days in total.

According to Wasserberg, such cruises allow clients to visit Aldabra for around three days, while sleeping on-board the yacht, combined with one-day stopovers at each of the other islands.

He said Aldabra’s massive lagoon is subject to unique tidal currents which requires all excursions into the lagoon to follow strict timelines, as the speed at which water travels in and out of the channels means that certain areas of the atoll can be experiencing high tide while other areas in the lagoon are at low tide, which is impassable for the yachts.

Wasserberg said Aldabra lagoon is usually filled to the brim with fish, since the Seychelles Islands Foundation (SIF) which manages Aldabra, has imposed a total ban on fishing near the atoll.

“On our last trip, a giant brownish grouper - over two metres long - swallowed one of our clients’ underwater cameras,” he recalled.

The neighbouring Alphonse Group consists of two atolls; Alphonse and St Francois, which offer excellent diving, although Wassberg says it is not for beginners as currents can sometimes be strong. Features include forests of tall Gorgonian fan corals, shoals of barracuda and the hawksbill turtle.

Cosmoledo’s remoteness surpasses Aldabra. Unlike Aldabra, which has a small population of researchers, Cosmoledo is uninhabited and very rarely visited by the outside world.

There are some bird species on Cosmoledo which are not found on Aldabra, including enormous seabird colonies, with Seychelles’ largest populations of the Red-Footed Booby, Masked Booby and Sooty Tern.

The island of Astove is surrounded by deep waters of around 250 metres, and has been rated as one of the finest dive sites in the world, with hundreds of species of fish, green turtles and even a few anchors of old ships.

Silhouette Cruises charges around 500 Euros (approximately $590) per day for Aldabra cruises for full board, and an additional environmental surcharge of 200 Euros ($236) will apply for visiting the SIF-run Aldabra atoll.

Other islands, such Alphonse, Cosmoledo and Astove are run by the state-owned Islands Development Company (IDC) which charge $25 (around 22 Euros) per day.

Inner island cruises, to such islands as Praslin, La Digue, Curieuse, Aride, Cousin, St Pierre and Coco usually last about a week, costing 250 Euros (around $300) a day. There is an additional charge averaging 200 Seychelles rupees (around $15) for marine parks in the area, as well as nature reserves such as the Vallee de Mai, on the second largest island of Praslin, habitat of the unique coco-de-mer palms, which is also a UNESCO World Heritage site.