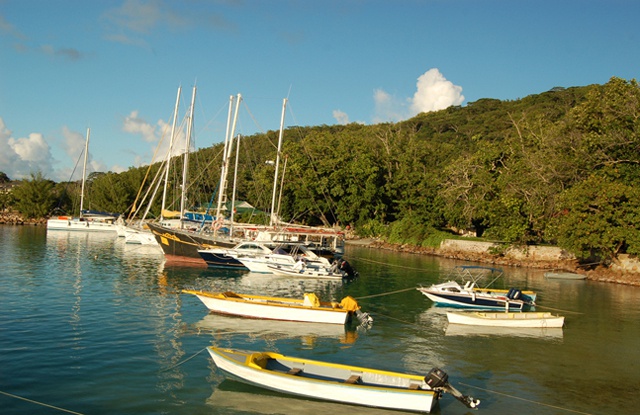 File Photo: a group of leisure boats are moored at the port of the Seychelles' third most populated island of La Digue. (Gerard Larosse, STB)

(Seychelles News Agency) - A leisure boat with 19 people on board caught fire yesterday returning from the Amirante Islands, a group of coral islands more than 200 km south-west of Mahe, the main island of the Seychelles in the Indian Ocean located.

“The owner of the boat informed us that the fire started on one of his ships and the passengers and crew were forced to abandon ship,” the director of the Seychelles Maritime Safety Authority, Richard Ernesta, told SNA.

The owner of the company, Elegant Yachting (Pty) Ltd. has declined to speak to the media before he had made his official statement to the police.

“From what I understand, the crew complied with the instructions they should have followed in this type of incident before abandoning ship,” said Ernesta.

The exact cause of the fire is not yet known.

According Ernesta, the boat had left Mahé on January 8 for Amirante Islands and was scheduled to return today, on 15 January.

The Seychelles Coast Guard were informed of the situation but did not intervene directly.

“We sent a vessel to the site, but then we learned that another boat from the same company was in the area and had already come to help,” said Captain Jean Attala, the spokesperson for the Seychelles People's Defense Forces.

The coastguard instead deployed an aircraft to monitor and assess the situation.

“The last time we saw the boat it was on fire. An aircraft will go out again today to see its exact position and see if it has sunk,” said Atala.

Of the 19 people on board the boat, there were 10 tourists, seven crew members and two security guards, but all were returned to the main island of Mahé without any injuries.