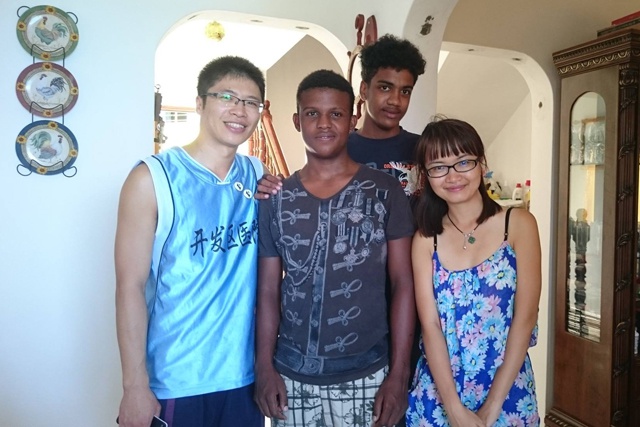 Some of the boys with the saved man and colleague.From Left to right: Dr Xing Lio, Yannick Folette, Pejo Nicette, and a colleague of the doctor. (Joanna Nicette/Seychelles News Agency)

(Seychelles News Agency) - Most of the beaches around the Seychelles' most populated island, Mahé, are calm and safe to swim in.

But even in the North West monsoon, which the archipelago is currently experiencing, which brings passing showers and light breezes, the sea in some bays and beaches can be treacherous.

At Machabée, a village in the northern district of Glacis, the villagers, many of whom are traditional fishermen, are well-acquainted with the rough and rugged bay, and from a young age, most children are taught how to swim.

On Saturday 10 January, four Seychellois boys, aged not more than 19 years old, watched as a man ventured into the bay for an evening swim. It was almost dusk, and one of the boys, Yannick Follette, knowing that the currents were dangerous, watched him with a sense of unease.

“We all said that he was mad to be going swimming at that time of the day and in such rough seas, but we did not say anything to him,” Folette said later to SNA.

“Saving someone’s life has always been a dream of mine and we started to talk about how we would go about such a mission if we ever had to, when I noticed that this guy was having trouble staying afloat”, said Folette who valiantly jumped in the rough sea to help the man, while two other boys, Pejo Nicette and Nel Amblavaney went to ask the swimmer's companion who was watching him from the beach, whether or not he was a strong swimmer.

The struggling swimmer turned out to be 31-year-old Dr. Xing Lio, a Chinese national working in Seychelles on a one year contract under a cooperation agreement between Seychelles and China.

"I quickly ran into trouble myself as the currents were strong, and I shouted to Pejo to help me. He had already jumped into the sea and he made his way towards us,” Follette said.

Quickly, Pejo Nicette braved the rough seas to help his friend and the two remaining boys sought help from nearby houses and some fishermen who were sitting under a tree by the road.

A good deed that could have turned into a tragedy

Back in the sea, Nicette and Follette were struggling against strong current and big waves.

“I had hold of the Chinese doctor’s hand but he was very heavy and as the current pulled on me I had to let go in case I dragged him under with me.The situation was getting bad as wave after wave hit me. So I had to leave him to Yannick and as I began to think that I would surely drown, I dived under the waves and current to try and get away.”

Nicette, who is asthmatic, said he felt excruciating pain in his chest and started to have difficulty breathing, so he left the two to fend for themselves whilst he fought his way towards the shore.

“Finally I was able to reach the shore where I fell onto the beach and passed out,” Nicette said after his release from Victoria hospital the next day.

Their combined efforts however, had enabled Folette to get the man to shallow and safer waters where another one of his friends Carlos came to assist them with floaters made from emptied and cut plastic gallons to buoy up the man and make it easier to swim with him ashore.

The doctor, who is in second month of his employment contract with the Ministry of Health and is based at the Anse Boileau Regional Health Centre on the western side of the island, was none the worse for his misadventure and administered first aid to Nicette while they waited for the arrival of an ambulance.

Paramedics worked on Nicette at the beach itself before taking him by ambulance first to the English River Health Centre then to the Accident and Emergency unit at the Seychelles Hospital where after X-rays and other consultations he was admitted overnight to the Male Medical Ward.

Putting others before self

In a gesture of appreciation, Xing Lio and his colleagues visited Nicette at his home when he was released from hospital on Sunday. He also met with Yannick Folette and the other boys involved in his rescue and thanked them too.

Sub Inspector Botsoie from the Seychelles Police, who is in charge of the Glacis District Police Station has congratulated the boys on their bravery and said their quick actions prevented the loss of life.

“It is reassuring to see our youths upholding such values and putting others before themselves like those boys did. This could have turned into a tragedy, not only for the man, but also the boys themselves as was almost the case with Pejo. I am proud of those boys. They did a very good deed,” the sub inspector told the parents of the boys when they went down to the station to give their statements on Monday.

The parents of the boys have also expressed gratitude towards the community for their quick response.

“This is what Seychellois are all about. We are always there for one another in times of need. Their quick actions ensured Pejo recovered and that Yannick and the man got to shore safely. I am grateful to them all,” one mother said.