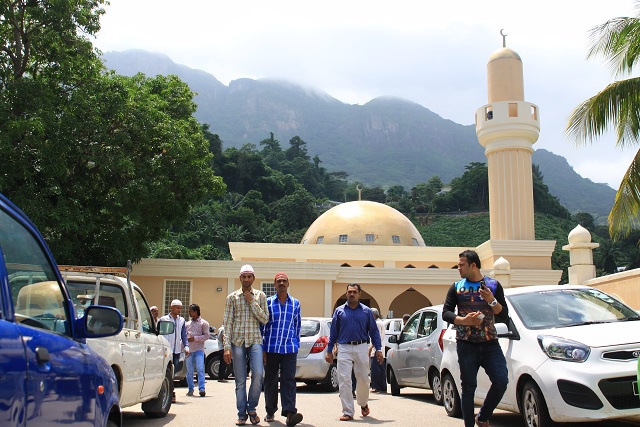 (Seychelles News Agency) - Muslims and non-Muslims alike came together in the Seychelles this weekend for a series of interactive talks on the basic tenets of the Islamic faith, in an effort to counteract the Western world’s negative perceptions of the world’s fastest-growing religion.

Although Muslim seafarers and traders visited the Seychelles archipelago long before the European discovery of the islands, Islam was not officially established here until the first mosque was built in 1982.

The population of Muslims in the peaceful island nation has grown rapidly in recent years, from under a hundred people in the 1960s and 70s to an estimated 2,000 today.

According to the National Bureau of Statistics 76.2 percent of the Seychelles population of around 90,000 people is Roman Catholic, 6.1 percent Anglican, 2.4 percent Hindu, 1.6 percent Muslim, and 13.7 percent other faiths.

Muslims now live side by side with their non-Muslim counterparts, and with new Muslims emerging from many traditionally Catholic families, most of the inhabitants of these tropical islands have managed to exercise the necessary tolerance and understanding that eludes many groups in the West.

Renovations to the mosque in the centre of the Indian Ocean archipelago’s tiny capital of Victoria were completed three years ago. The construction of a second mosque was completed in 2013 in the Mont Fleuri district, on the outskirts of the town.

Plans are now afoot to build a place of worship on the second-largest inhabited island of Praslin as well as one in the south of the main island of Mahé, to cater for the ever-growing numbers of Muslims in the archipelago.

Despite the fact that peace and harmony among a multitude of different religions and sects prevails with ease in the Seychelles, Islam is not without its detractors, even here on the islands, which was until very recently almost exclusively Roman Catholic. Christianity and Catholicism still play a huge role in daily life – work, school and even public holidays are dominated by Christian beliefs.

Islam, on the other hand, has been branded by many Westerners as a religion that is the root cause of the rise of terrorism, civil strife and the degradation of women’s and human rights in Muslim countries around the world.

The recent terror attacks on the Paris headquarters of satirical newspaper Charlie Hebdo has raised heated debates about freedom of speech versus respect for religion, and the subsequent publication of a cartoon depiction of the prophet Muhammad by the surviving staff members of Charlie Hebdo last week led to renewed unrest by conservative Muslims.

Islam ‘under a cloud’

The timing therefore could not have been better for the president of the Islamic Society of Seychelles, Ibrahim Afif, to announce the anticipated arrival in Seychelles of two speakers under the local 'Explore Islam' programme: Dr. Bilal Phillips, a charismatic and somewhat controversial Islamic scholar originally from Jamaica as well as Mutah ‘Napoleon’ Beale, a former American rapper turned Islamic speaker.

Unfortunately, the arrival of Dr. Phillips was suddenly cancelled due to ‘unforseen circumstances’, and a replacement speaker, Sheikh Sultan Bilal of Bahrain, was called in to headline the programme.

At one of the talks, held at the International Conference Centre of Seychelles (ICCS) on Saturday, the white-clad Sheikh addressed how Islam is branded and labelled in the world.

“When we talk about what the Prophet said about Islam… he said that every single prophet and messenger of Almighty God came to take human beings from darkness into the light. We went from worshipping idols to worshipping the Creator alone,” said Sheikh Bilal.

The Islamic cleric raised a number of common misconceptions and arguments against Islam, including the notion that Islam is not a peaceful religion.

Sheikh Bilal pointed out that there were Muslims who act in the name of Islam but in reality violate the principles and teachings of the religion, and the scholar said one must not make the mistake of blaming the religion for such senseless acts of violence, but rather the individuals who were involved in such acts.

The Sheikh pointed out that there were Seychellois who were born to non-Muslim parents, who willingly came to the fold of Islam, just as the Muslims in Indonesia, which make up one third of the Muslim world’s population “came to Islam willingly, with no compulsion... no force.”

Addressing the issue of alcohol, the cleric claimed that the excessive consumption of alcohol was the main cause of the break-up between husbands and wives.

“When we come to the issue of alcohol and intoxication, what do they tell us… this will (make you) ‘high’… but they don’t know that if you are high and you fall you will break your nose!”

"Everyone is a Muslim before God"

Aminah, 56, converted to Islam over thirty years ago. A single mother with three daughters, she said it was her religion alone that gave her the strength to endure the challenges of a hard life. She runs a spice stall in the market in Victoria and now has five grandchildren. Her daughter, who works alongside her, does not wear a hijab, but Aminah says that is her daughter’s choice to make, not hers.

“It was very nice to have these talks. I went to all three,” she told SNA this morning. “There were a lot of non-Muslims there too, especially on Friday evening. They asked a lot of questions.”

According to Aminah, the non-Muslims at the talk were satisfied with the answers they received. She said the point was not to try to convert anybody, but to help everyone understand one another better.

“It’s very simple,” she said. “Even a long time ago, when I was here in the market they challenged me, they said whatever they wanted but I didn’t pay attention to them. I listen to the word of Allah.”

“Everyone is a Muslim (servant) before God,” she added. “It just depends on what it is inside their heart.”

Here in the bustling Sir Selwyn Selwyn-Clarke market, it seems, everyone has an opinion to share. While Aminah was sharing her views about the weekend’s events, a passer-by, 72-year-old John Fanny, voiced his support.

“I am not a Muslim,” he said. “But these people who kill others in the name of religion, they are not Muslims. They are bandits. In Africa and all sorts of other places, you will find people who will chop each other up and murder one another for no reason. But here in Seychelles we are not like this. We are peaceful people and we have no problem with the Muslims here.”

The Seychelles Minister for Tourism and Culture, Alain St. Ange, said that Seychelles prides itself on having a variety of religious denominations which are able to live together in complete harmony.

Minister St. Ange said Sheikh Sultan Bilal and Mutah Beale's visits had come at an opportune time when the world was preoccupied by the Paris attacks.

“We need people like you to visit our country and to promote unity through your teachings,” Minister St. Ange said in a press statement issued on Friday.