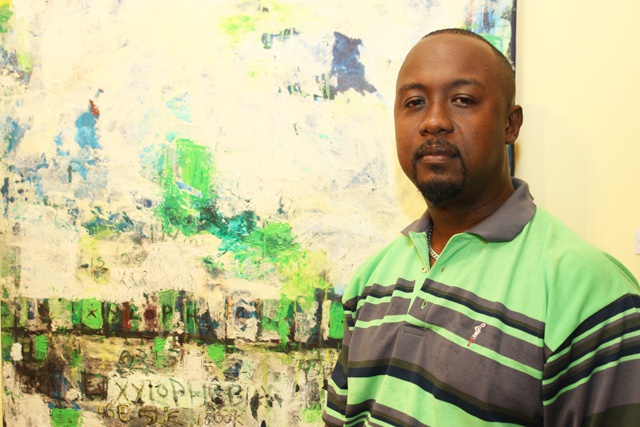 Jude Ally, one of the most well-recognised artists from the Seychelles, has launched his latest collection of over twenty pieces at an exhibition at the Alliance Française in Victoria (Joe Laurence, Seychelles News Agency)

(Seychelles News Agency) - The Alliance Française of Seychelles, nestled in the archipelago’s tiny capital of Victoria, kicked off its exhibition season for 2015 with an exposition from local abstract expressionist painter, Jude Ally.

Although Ally worked on his art for over twenty years before making his first solo exhibition, the artist has gone on to exhibit his works in a number of different countries, such as Australia, Austria, England, Lebanon, Italy, France and his home country, the Seychelles.

When I first viewed the paintings of Jude Ally with my untrained eye, I saw simply a combination of collage and graffiti. It was only when he spoke to me and decoded the secrets of his work that I realised the beauty of his art.

Stunned by the depth, research and sensitivity of these paintings, it finally dawned on me why the artist had been recognised internationally, having won the gold medal at the Jeux de la Francophonie (Francophone Games) in Nice, France in 2013 in the Culture/Painting category.

Many of Ally’s peers in the local art field were in attendance to support him, as were his friends, his fans and the press.

Growing up in the Indian Ocean archipelago of 115 islands of unparalleled beauty, Jude's obvious artistic talents were spotted early on by his family. One of the earliest Jude Ally originals goes as far back as when he was at the tender age of four – an artwork he made for his mother on Mother’s Day.

In Seychelles, the artist who has most influenced Ally is Leon Radegonde.

"We use different techniques but we have the same inspiration," Ally revealed.

His most pioneering works are marked by various collage techniques, which once assembled, resemble old posters and graffiti on the walls distorted by time and rain.

In his paintings, Jude often involves symbols, letters and numbers, as if to tell the audience that hidden under layers of paint and brush strokes there is a system of codes and a message to decipher.

"My works tell stories, they recount memories and emotions," says Ally. Most of his paintings reveal figures that represent either the time or the date when the idea came to him.

On some canvases Jude uses his imagination, while on others it is inspired by information he hears on the news, because, he says "these facts affect me as a human and as an artist, there are events that make me feel strong emotions then I want to express in my paintings, but sometimes we cannot say everything, that's why some details are hidden in my paintings," he explained.

"I do not try to correct what I do, I rework. For there are no such things as accidents. I consider what stands in my paintings as both a reflection of my conscience and my subconscious," he philosophised.

During his development as an artist, Ally says he was interested in many artistic facets, such as poetry, writing, photography, music and theatre. His preferences gradually focused on three central themes: music, poetry and painting.

"Music and poetry influence and permanently inspire my paintings, and I believe today that there may be a link between the three that I'm trying to work out," Ally said.

Like many painters in the Seychelles, he cannot make a living as a painter alone, so he pays the bills with another professional role – Ally is a teacher of visual arts. He makes use of the institution where he teaches as a base from which to exhibit his paintings, while he waits for an opportunity to establish his own studio.

Ally’s latest collection of over twenty pieces can be admired over the next two weeks at the Alliance Française in Victoria.