A love affair with Aldabra - tribute to David Stoddart, the champion of the world's second-largest atoll 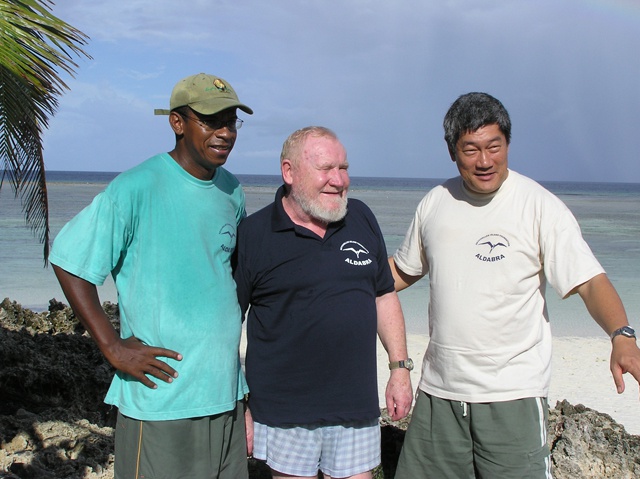 David Stoddart passed away on 23 November 2014.  Bidding a last farewell to his beloved Aldabra. A poignant photo of David Stoddart in his element on his last visit to the atoll with Seychellois Ronny Renaud (left) and Lindsay Chong-Seng (right) (Seychelles Islands Foundation)

Back in the 1970’s when the British were deciding on the fate of Diego Garcia and Aldabra; few environmentalists were as eloquent in their views on the future of those two groups of islands in the Indian Ocean as David Stoddart.

Having been on both islands, the stocky, red-haired Briton, in his 40’s, and already a well-known expert in coral-reef science and conservation, used his wits and knowledge - to the annoyance of many - to turn the tables in favour of Aldabra.

What followed was a love affair with the world’s second largest atoll.At that time, little was known of the coral atoll known as Aldabra, which is made up mainly of four islands only a few metres above the sea, each with its own insular flora and fauna communities.

Stoddart, who was also a member of the Royal Society which first leased Aldabra from the authorities in charge of the British Indian Ocean Territory, had already discovered the vast treasures of the atoll even before it was officially recognized.

His study prompted the British government to decide against using Aldabra as a military base, and instead the British authorities chose Diego Garcia of the neighboring Chagos Islands to turn into an airbase, an island that has less wildlife than Aldabra. He was not aware what the islands were being planned for in terms of movement of population, and when he later saw the Chagos islanders expelled from Diego Garcia, he felt betrayed by the authorities and become a fervent opponent of the military base.

The newly-independent government of Seychelles demarcated the atoll as a special reserve managed by Seychelles Islands Foundation, (SIF) and later, the world would soon catch up with the realisation, when the atoll was declared a World Heritage Site in 1982 by the United Nations Scientific, Educational, Cultural and Cultural Organization (UNESCO).

Let there be light

These events were a turning point for the atoll and Stoddart was determined to make the world aware of Aldabra.

In a special issue of SIF’s newsletter issued last week, Ambassador Maurice Loustau-Lalanne, who is also the chairman of SIF, recounted that Stoddart had discovered all of Aldabra’s secrets, such as the marvels of the highest point on Ile Esprit, which he gladly shared with others.

“In 2000, during a scientific expedition, he insisted that I walk the whole of Grand Terre Island with him. Eight of us started the walk and only seven completed the six-night and seven-day marathon,” wrote Loustau-Lalanne.

As a consequence, the atoll surrendered unimaginable discoveries that were relished by conservationists across the globe, including the world’s largest population of giant tortoises, several species of terrestrial birds, including the last flightless birds of the Western Indian Ocean - the Aldabran white-throated rail Dryolimnas cuvieri aldabranus, and many other endemic species of flora and fauna.

Recruited by the Royal Society to study giant tortoise population dynamics during the early years of the establishment of Aldabra, David Bourn recounted that Stoddart always “relished a challenge and a good story,” and continually demonstrated his enthusiasm and commitment to the continued protection of the atoll.

Stoddart spent “long hours in the Research Station library, photocopying large numbers of documents and scientific records with a view to their preservation in at least one other location,” remembers Seychellois Lindsay Chong-Seng.

The author of a number of books on Aldabra, Stoddart was so obsessed with the atoll’s beauty that he even named his daughter after the subject of his lifelong passion.

The geographer did have other interests too, such as the study of sediment budgets on coastal salt marshes and on the influence of Darwin on geographical work.

His acclaimed paper On Geography and Its History, published in 1986, earned him gold medals from three leading geographical societies, including the Darwin medal of the International Society for Reef Studies.

Author Adrian Skerrett stated that David knew a great deal about a broad range of subjects and described the man as “meticulous and passionate”.

A love for geography

Born in the Stockton-on-Tees in the north east of England, Stoddart got his feet wet in environmental matters from a very early age, having worked in 1956 with Professor Alfred Steers in coastal geomorphologies.

After several research of his own, David began his career as a lecturer in geography at Cambridge University, a fellow of Churchill College and later worked in the University of California at Berkeley, until he retired in 2000.

He was also instrumental in several publications including the setting up of the international journal Coral Reefs and the International Society for Reef Studies which became a platform for scientists in reef protection and restoration.

A legacy for generations to come

Many of his acquaintances and fellow colleagues made fun of how he was out of place in the modern world, affectionately describing him as ‘eccentric’.

His time spent in the tropics, exposed to the sun, the insects and the rough lifestyle, eventually took its toll in the final years of his life but his friends joked of how a trip to his first love, Aldabra, always seemed to ‘resurrect’ him.

For his years of devotion, the Seychelles Island Foundation duly named their funded scholarship in his honor for students who wish to study a BSc in Environmental Sciences at the University of Seychelles.

Past students and colleagues will probably echo Malcolm Coe’s description of David as “Aldabra's greatest champion”, the like of which will not easily be seen again.

Still largely unseen and unspoiled, today Aldabra remains almost out of reach and fiercely protected by the authorities in Seychelles who manage it.

With David Stoddart’s passing in November last year, at the age of 77, the atoll’s managers are calling for a new champion as the surge of rising tidal waves are slowly eroding away its natural beauty, taking it with it Aldabra’s many virtues and unfound treasures.