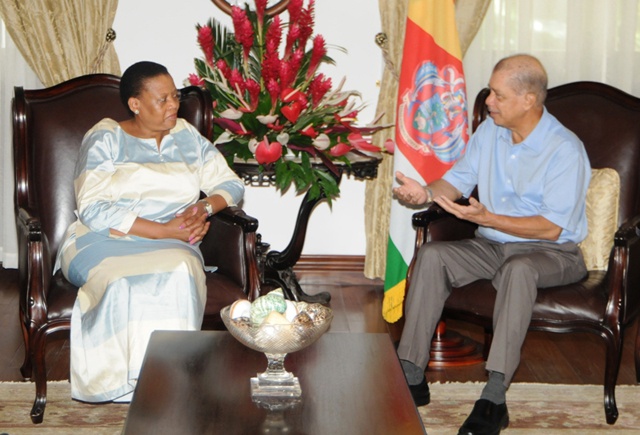 (Seychelles News Agency) - African Union Special Rapporteur on Freedom of Expression and Access to Information Pansy Tlakula has told journalists in the Seychelles that they must not look to anyone but themselves for leadership on the issue of access to information in the country.

This statement followed a four-day visit to the 115-island Indian Ocean archipelago by a five-member delegation headed by Tlakula. The visit was organised by the Seychelles Media Commission (SMC).

The president of Seychelles, James Michel, on Tuesday confirmed his government’s support to hold further consultations for the development of legislation concerning access to information based on the African Union (AU) Model Law, which was adopted by the African Commission on Human and People's Rights in 2013.

"We are building a strong and functional democracy. It is important to improve our institutions and ensure transparency and accountability. It is the way forward for Africa, to espouse the ideals of freedom of expression and access to information," he said.

A national dialogue is now due to be launched within the next six months by the SMC involving all stakeholders to seek ways to adopt the Model Law on Access to Information.

As the word suggests, a Model Law need not be adopted by states in its exact form, but should be adjusted to suit the legal and other requirements of each state.

Following the State House meeting, the South-African-born Tlakula said that Seychelles is one of only a few countries in Africa that has entrenched the right of access to information in its constitution. Most countries’ constitutions only protect the right of freedom of expression.

At a press conference for members of the local press at the Palais de Justice courthouse in Victoria, it was noted that lack of access to information deprives citizens of their right to participate in the country’s decision-making process and hold elected representatives accountable for their acts and omissions.

The delegates pointed out that a country where journalists and members of the public do not have access to public information creates an environment in which corruption, maladministration and mismanagement of national resources thrive.

Exposing corruption and mismanagement of resources, local journalists argued, would increase transparency and lead to improvements in the enjoyment of socio-economic rights and to contribute to the eradication of underdevelopment on the continent.

Tlakula said that the adoption of the Model Law must be a home-grown initiative. "We are not here to dictate. It is up to you to hold your government to account."

One journalist pointed out that the proviso for access to information had been enshrined in the Seychelles Constitution for more than 20 years, but reality on the ground was far from what was on paper.

Another stated that even if legislation was brought in on the same lines as the AU's Model Law on Access to Information, the official mindset would still be hard to change.

"We still have officials refusing to speak to some of us, being selective about whom they give information to and the legislation will not bring the transparency it is intended to."

Nigerian legal consultant and member of the working group, Maxwell Kadiri, said the Model Law did not concern only journalists, but all citizens.

"We need to change the defeatist attitude," he said. He gave the example of Ghana, where freedom of expression legislation has taken eight years to reach parliament, after being put on hold by the executive. Now it has finally reached the legislature, the proposed law has received widespread public awareness and support.

Kadiri also noted that for the first time, a case on freedom of expression is presently being heard by the African Court for Human Rights, sitting in Arusha, Tanzania.

That is the case of Lohe Issa Konate, editor of the newspaper ‘Ouragan’ in Burkina Faso, who was jailed for 12 months, fined the equivalent of 18 years' earnings and had his publication closed, after he was sued for "insulting and defaming" a local prosecutor.

"Hopefully, we can use the Konate case to change the media landscape in Africa," said Kadiri.

Tlakula said that she has been assured by Foreign Affairs Minister Adam of ongoing projects for law reform, such as repealing outdated criminal defamation and libel laws that are still on the statute books.

"I am glad to note that there are no journalists jailed in Seychelles or forced to flee the country and libel laws have not been applied for several years,” she said.