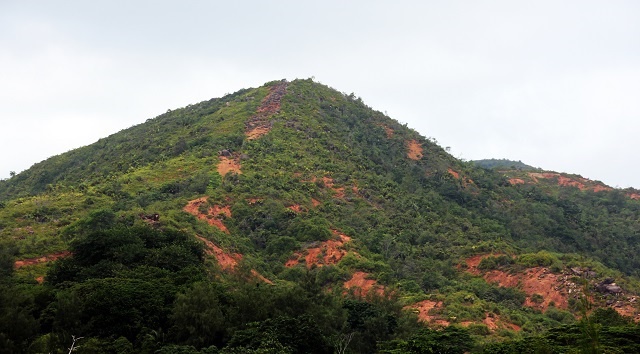 A sorry sight - La Hauteur Mountain, overlooking the district of Baie Ste Anne, has been sporting bare red patches for almost thirty years following forest fires and soil erosion. The Terrestrial Restoration Action Society of Seychelles (TRASS), the only NGO based on the island of Praslin, has in its seven years of existence rallied volunteers to make the island once known as the ‘Isle of Palms’ greener. (Romano Laurence / Seychelles News Agency)

(Seychelles News Agency) - In 1744, when the French explorer Lazare Picault discovered Praslin, the second largest of the 115 islands of the Seychelles archipelago, he was so taken by the amount of wild vegetation he found that he named it ‘Ile des Palmes’ or ‘Isle of Palms’.

Among the abundant trees, there were coconut palms and several other varieties of palms including the coco-de-mer palm trees (Lodoicea maldivica), with its suggestively-shaped nuts weighing more than 17 kilograms, the largest in the plant kingdom.

Two and a half centuries later, however, the once-lush island’s original lush green canopies of indigenous palm forests have shrunk to just a few spots on the island.

After settlers introduced invasive species of plants and animals, the island is slowly becoming barren, scarred by years of forest fires and soil erosion.

“Nearly 40 percent [over 1500 hectares] of land, especially the hilltops of Praslin, have been stripped bare. The red soil can be observed from afar and several of them have been this way for more than 30 years,” said Dr. Elvina Henriette, a Seychellois biodiversity consultant and an affiliate of the Terrestrial Restoration Action Society of Seychelles (TRASS).

Getting their hands dirty

Following a study in 2009, which evaluated the extent of soil degradation and highlighted some of the most affected areas, TRASS was launched as the only non-governmental organization (NGO) on Praslin.

The NGO brings together a cohort of volunteers from the islands with the intent of transforming the hilltops into green forests using endemic and native plants.

“Some rehabilitation had already been done in the past especially on government lands and national parks but we needed to concentrate our efforts on private land,” Henriette told SNA.

Most of these projects are undertaken during the north-east monsoon, which is also the archipelago’s wettest season, with the rain and cool cloud cover providing ideal conditions to help the saplings and cuttings establish strong roots in the red soil.

The NGO started out working on small patches of land to test different plants and techniques, with funding coming mainly from the Global Environment Facility’s (GEF) Small Grant Project, supported by the United Nations Development Programme.

As a result of the trial projecs, two areas, a patchy hilltop overlooking Consolation which had suffered from bouts of forest fires and a piece of private land at Pointe Chevalier which overlooks the renowned beach of Anse Lazio were rehabilitated.

“During these trials, we found that our plants grew in spite of severe dry spells,” said Henriette.

As a result of their successes, this year TRASS is being more ambitious.

They are rehabilitating an area of 20 hectares of land on the hilltop of La Hauteur, which overlooks the district of Baie Ste Anne, on the island populated by over six thousand people.

A total of two thousand plants, mostly endemic species such as the ‘bwadnat’ or Mimusops sechallarum are being planted.This exercise, which started in late November, was conducted using local volunteers and groups which helped to carry the plants and provided labour to dig holes and help plant the trees.

Although classified as ‘near threatened’ on the list of the International Union for Conservation of Nature, IUCN, according to TRASS, the bwadnat is ideal for eroded areas.

A project for the community and the country

“This is a way to help the environment and our island. I take pride in working in these arid hilltops and coming back to see our trees growing,” volunteer Christelle Marie told SNA.

Marie has been a volunteer with TRASS for many years and she often brings along new recruits for each exercise.

One of the new volunteers, 30-year-old Mariette Dine, said she was “impressed with the hard work the women and men are doing”.

“When we work in an area, we continue to monitor the growth for months,” says Henriette, adding proudly that only a small percentage of planted trees had died in other experiments they have conducted in the past.

The exercise is also used to create awareness about the dangers and the impact of forest fires and deforestation.

“All our volunteers are ordinary people, some are farmers, office workers, etc. who feel this is a cause of concern and they are committed to it,” says Henriette adding that their 50 members are encouraged to share the knowledge they have acquired about the issue with the local community.

“This is not for TRASS, it is something we are doing for the community, for the island and for the country,” added Henriette.

According to the Food and Agricultural Organisation (FAO), soil should be managed sustainably as although soil is what the organisation has termed a ‘silent partner’, it plays a major role in food production, vegetation growth and the general wellbeing of a country.

FAO has declared 2015 as the International Year of Soil.