No ‘serious’ misuse of public funds in 2013, says Seychelles Auditor-General 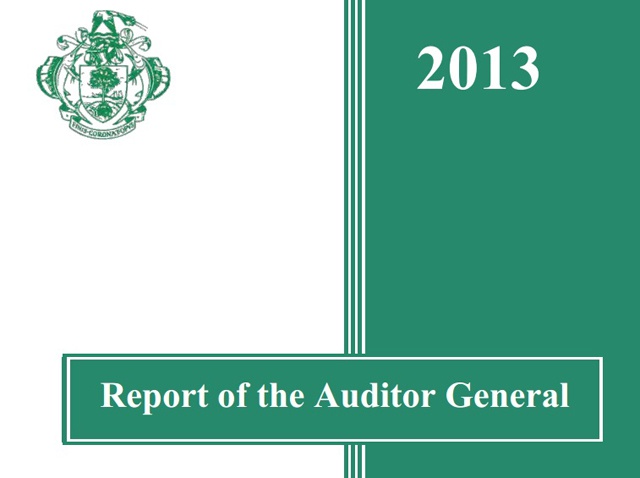 (Seychelles News Agency) - The Auditor General of Seychelles, Marc Benstrong, has said that no ‘serious incidences’ of financial misappropriations or allegations of fraud occurred in government during 2013. The Attorney-General’s annual audit report for 2013, which was submitted to the National Assembly in December, reported an overall improvement in the way the country’s public funds were managed.

However, Benstrong told SNA that government ministries, departments and agencies can still do more to manage public finances.

"Included in this report are some of the matters arising from the audit inspections in a number of ministries, departments and agencies during the audit cycle in respect of the year ending December 31, 2013,” stated Benstrong in an overview of the report.

Interviewed by SNA recently, Benstrong, who has a staff of 35, said the audit had examined a sample of public finances rather than the full spectrum of government organisations.

"I feel comfortable to note that unlike previous years, there have been no serious irregularities involving public funds based on samples verified for audit."

While confirming an overall improvement, he noted that there should be more compliance to financial legislation and regulations, to ensure strong management and oversight on the use of public funds.

Benstrong deplored the fact that there were still several instances of government offices not adhering to the Procurement Act, covering goods and services over a certain amount.

"Weaknesses still remain in internal controls as well as management of assets and transport," he told SNA.

Benstrong however noted that the shortcomings are not particular to any one ministry, department or agency, but are spread evenly across public offices.

The most serious cases

While inspecting the books of the Ministry of Foreign Affairs (MFA), Audit found that in respect of the nine overseas diplomatic missions, abroad (London, New York, Paris, Brussels, Pretoria, New Delhi, Beijing, Abu Dhabi and Addis Ababa) outstanding balances of just over SR9 million (around $647,000) have not been cleared. The uncleared balances represented almost 21 percent of the total approved budget for the missions, which totalled 43 million Seychelles rupees (around $3 million).

Benstrong told SNA that the funds are forwarded to the diplomatic missions by the Treasury, which require confirmation of receipt of the funds and how these have been spent in order to ensure proper monitoring.

Audit also notes SR 1.8 million (about $125,000) in financial assistance from the UAE Government for the running of the embassy in Abu Dhabi, had not been accounted for by the Ministry, although the funds were used by the embassy.

“The non-accounting of such understated the actual funding of the embassy during 2013, and overstated its running costs in the national accounts."

The Ministry of Foreign Affairs replied that all relevant documents have been submitted to the Ministry of Finance and that it will follow up to establish whether the transactions have been recorded. MFA also stated that the Finance Ministry has been requested to open a special account for grant monies which shall be used to record such funds.

In 2013 the Seychelles police force had maintained a fleet of 74 vehicles in 2013 and also made use of hired vehicles for a total of almost SR 10 million ($700,000). Audit examinations revealed that as reported in previous years, the police have still not entered into contracts with car hire operators. The department claims that since hired vehicles were needed at short notice, it is not feasible to work on a formal contract.

Audit also found irregularities on the sample of mileage records and found no proper record of vehicle accidents to have been maintained, pointing to abuse of the department’s fleet.

The absence of eligibility checks and bonding agreements for students, noted in previous audit reports, continue to persist at the National Human Resources Development Council (NHRDC). Audit examined a sample of 89 scholarships approved in 2013 and did not cite evidence of documents supporting applicants' eligibility in 10 instances, while 28 were not authorised by designated officers.

“This may give rise to ineligible students being awarded scholarships," read the report.

Although the management of bonding agreements, which are official documents recording the sums refundable should students fail to return to Seychelles to work for a stipulated time, have improved in general, Audit notes that copies of signed agreements were not seen on file in respect of three students.

From a sample of 25 students who completed training during 2013, audit notes 15 cases where students were not removed promptly from monthly payrolls, leading to overpayment of allowances worth just under SR 98,000 ($7,000).

"This is serious as it involves more than half of the sample examined," said Benstrong, who added that the Council should ensure prompt removal of students upon completion of training to avoid overpayment of allowances.

Lack of accountability at Tourism Board

The Audit report also notes failures by some state agencies to draw up statements of accounts on an annual basis.

He told SNA that unlike ministries and departments, whose accounts are kept by the Treasury, statutory bodies have to compile and submit their own.

The most glaring of such failures is the Seychelles Tourism Board (STB), which has not submitted any audited accounts since 2011.

"This creates a backlog, which will require several years to clear," said Benstrong.

He was pleased to point out that other statutory bodies such as the Central Bank of Seychelles (CBS), the National Pension Fund (NPF) and the Seychelles Civil Aviation Authority (SCAA) have always submitted their statement of accounts on time.

Speaking to the outgoing Minister of Finance, Pierre Laporte, this week, SNA has been informed that the follow-up and consequences for such instances of alleged misuse of public funds will be much more thorough.

“In addition, a Government Audit Committee (GAC) was set up in 2014. This will ensure that all deficiencies in the public finance raised by the Auditor General and the Chief Internal Auditor are corrected based on the action plan that the entities’ accounting officer present to them… the GAC is an independent body where the Chairman is a full-time public servant and reports to Minister of Finance, and the other members are private sector individuals.”

The minister described the Auditor General’s report as a great form of assistance to the Finance Ministry to identify issues of mismanagement in public entities as the ministry gears up to implement Programme Performance-Based Budgeting across the board in public finance over the next few years.

When asked why the Auditor General audits only samples of the government's books instead of the whole spectrum, the Minister explained that the principle of auditing was based on sampling.

“An auditor is trained with [specialised] audit techniques… [and] international practice also follows the sampling method. Thus a good auditor will have good techniques to choose his sample very well. But if there is a fraud investigation, an auditor can choose to audit 100 percent of the accounts.”

Since removing the accounting officers in each ministry and replacing them with Ministry of Finance staff, the Minister has said that there has been a “great improvement” in reporting, adding that the biggest challenge remained to ensure that the accounts officers worked more closely with the line ministries’ administrative officers, as the admin staff were most often involved in procurement of goods and services based on the approval of the Principal Secretaries and CEOs.

US, Seychelles sign agreement to ensure tax compliance by Americans

Seychelles to introduce tax on foreign-owned property next July