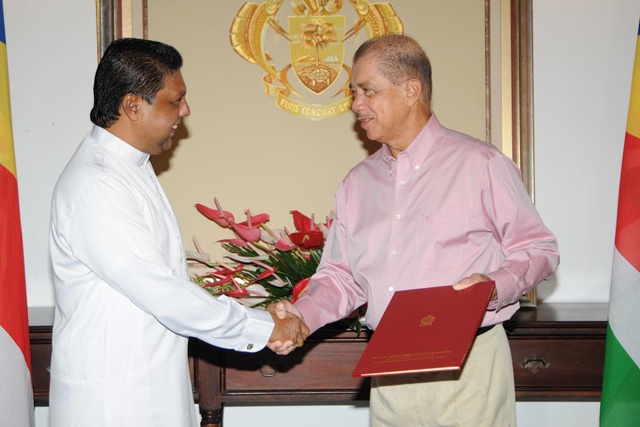 (Seychelles News Agency) - Sri Lankan citizens living and working in the Seychelles need not fear that diplomatic ties between their home country and their adopted nation will be negatively affected by the new change in government.

This is the view of the Sri Lankan High Commissioner to Seychelles, Rajatha Piyatissa, who it has been rumoured is one of a number of top-level diplomats throughout the world who are being recalled by the new administration of Sri Lankan President Maithripala Sirisena.

The Seychelles Ministry of Foreign Affairs (MFA) said last week that it was “ready to assist” the new Sri Lankan government after reports surfaced that the country’s newly-inaugurated President Maithripala Sirisena’s government would be pursuing an investigation against former President, Mahinda Rajapaksa, in connection with allegations of stolen assets hidden in the Seychelles.

According to the Sri Lankan Sunday Times, new Foreign Minister Mangala Samaraweera has announced plans to ‘depoliticise’ and ‘completely overhaul’ Sri Lanka’s diplomatic corps by recalling a number of the previous government’s politically-appointed heads of missions.

The Seychelles Ministry of Foreign Affairs has not been able to shed any light on the situation, as a ministry spokesperson yesterday told SNA that “no formal notification” had yet been given to the Seychelles authorities on Piyatissa’s departure or on any news of the High Commission’s future in Seychelles.

Sri Lanka has 66 overseas missions, and some of the other missions reportedly affected by the recall include New York, Australia, Russia, Saudia Arabia, and South Africa.

According to the Sunday Times, letters were sent out to 27 heads of missions, reportedly giving them a month to return to the Sri Lankan capital of Colombo.

Speaking to SNA in a telephonic interview this morning, Piyatissa said that he was not currently able to comment on any matters relating to these reports, but took the opportunity to reassure the Sri Lankan business community and residents in Seychelles that nothing would change between the two “friendly nations”.

“The Sri Lankan government has not changed anything towards Seychelles. The friendship is still the same,” he stated.

He also confirmed that business between the two countries would continue regardless of the change in administration in Colombo.

“These are commercial ventures and governments will not interfere in those things, because every government wants its people to prosper and see that things go forward,” he explained. “The present government is a very forward-thinking government, I think it’s a government that is very clear on having a good friendship with all countries and I feel sure that they will continue to support all the ventures that have already been undertaken.”

“The new administration is doing a good job, I think that they are focussing quite well and I think that the people are satisfied with the progress they have made so far,” concluded the high commissioner. “They seem to be getting things right and I think we can look forward to something good.”

According to the state news portal of Sri Lanka, Finance Minister Ravi Karunanayake announced in the Sri Lankan Parliament on Thursday that an official audit and investigation process would soon begin to look into Sri Lanka's "non-strategic investments" in the Seychelles.

Minister Karunanayake also questioned the logic of having an international branch of the state-owned Bank of Ceylon in Seychelles, saying that the new administration would perform a "critical analysis and an in-depth evaluation pertaining to the viability of such an operation".