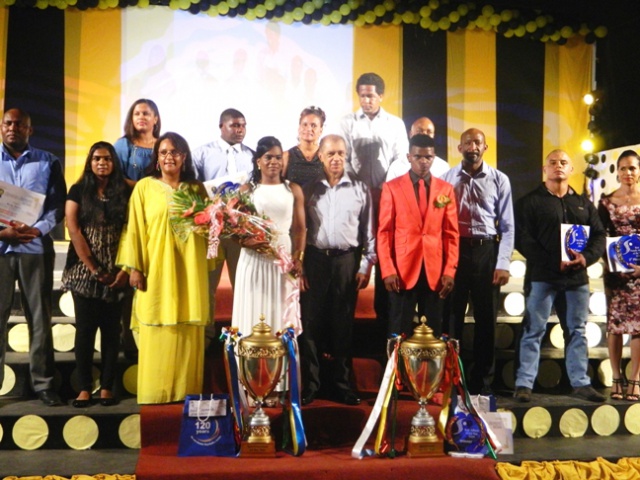 Seychelles President James Michel with the Sportswoman of the Year Clementina Agricole and Sportsman of the Year Andrique Allisop, together with runners up (Gilly Jean, Seychelles News Agency)

(Seychelles News Agency) - Pugilist Andrique Allisop and weightlifter Clementina Agricole shone at the 2014 Seychelles’ Sports Awards on Friday by winning the ultimate triumph as Sportsman and Sportswoman of the Year respectively.

The awards were hosted on Friday night at the Exhibition Hall at the Roche Caiman Sports Complex on the outskirts of the Seychelles capital of Victoria, located on the main island of Mahé.

Already in its 31st year, the prestigious event attracted a large crowd. At the climax of the evening, the winners were presented with prizes, including a cash prize of 40,000 Seychelles rupees (just under $3,000) and were presented the coveted floating cup by the President of the Seychelles, James Michel.

The two will keep the Cup until early next year, when the next awards will take place to crown the best sportsman and woman of 2015.

Second time around for Allisop

23-year-old boxer Andrique Allisop has reclaimed the accolade he first won in 2012. This time around, he won the award thanks mostly to a gold medal-winning effort from the African championships held last year in South Africa.

The fighter also made an appearance at the Commonwealth Games in 2014, after winning a second gold at an event in Cyprus, where he fought off challenges from opponents hailing mostly from Europe.

Moments after winning the top award, he admitted that he had been fairly confident of doing well.

“I had a good run last year and based on the results I achieved, I had a strong feeling I could win; or come in second in the least,” said Allisop, identifying bodybuilder Ziad Mekdachi as the man who he had been the most worried about raining on his parade.

All fears of that happening, however, were silenced at the height of Friday’s ceremony, when the bodybuilder’s name was announced in second place.

A tough fight ahead

Speaking as a finalist earlier to the media, Mekdachi had indicated he was hoping to win, noting that he made many sacrifices in 2014 to revive bodybuilding as a sport.

Now if Mekdachi has plans to usurp his rival in 2015, he will have his work cut out for him, as Allisop has already said he intends to fight tooth and nail in 2015 in a bid to keep the winning cup in his trophy cabinet.

2015 is an Indian Ocean Island Games (IOIG) year, one of the most important sporting events among island nations of the region, but the youngster said he has even bigger plans this year.

“I am not worried about the IOIG. There is no excuse not to win gold at the competition, but my priority is the African Championships where I intend to defend my title,” he explained.

“I also want to qualify to go to Olympics [in Rio de Janeiro, Brazil) next year, so I will concentrate my efforts towards achieving those two goals”.

If he is able to do that, he will be well on track to defend the crown he won last night, and on track to emulate the success of the country’s most successful pugilist, Rival Payet who has four sportsman-of-the-year titles.

Keeping the Sportswoman of the Year Cup for another year, 26-year-old weightlifter Clementina Agricole is also well on her way towards emulating some of the greats in the country’s sports history.

Her fourth place ranking at the Commonwealth Games in London last year was enough to win her back-to-back titles at the awards on Friday, following her first success in 2013.

As it stands, the record for most wins at the awards belongs to another weightlifter Janet Georges, and track and fielder Lindy Leveaux, who each have four titles behind their names.

The newest queen at the awards thinks she can beat the four-time record, provided she stays free of injuries.

The 26 year old added that she still has time to play catch up with her two forerunners, but understands that she might fall short of the target if she is unable to keep performing.

“My motto is sports for life, but I know that it is impossible. But, God willing, I can keep performing in the years to come to stand a chance of emulating their [Georges and Leveaux] success.”

Second place among the ladies went to judoka Brigitte Rose, who was looking to become the first women from the discipline to win the biggest prize in Seychelles Sports Awards, following the surprise success of her male counterpart, Dominic Dugasse, the previous year.

But similarly to last year, when she was among the favourites, her achievement of two gold medals at regional events meant she was outshone by Agricole.

The other finalists in the women’s race were Juliette Ah-Wan and Allisun Camille (Badminton), and Joanne Lou-Toy (Track & Field).

Other special prizes presented at the ceremony included prizes for best schools and federations, as well a prize for best coach, won by the legendary Rival Payet, the country’s second most successful athlete at the Sports Awards.