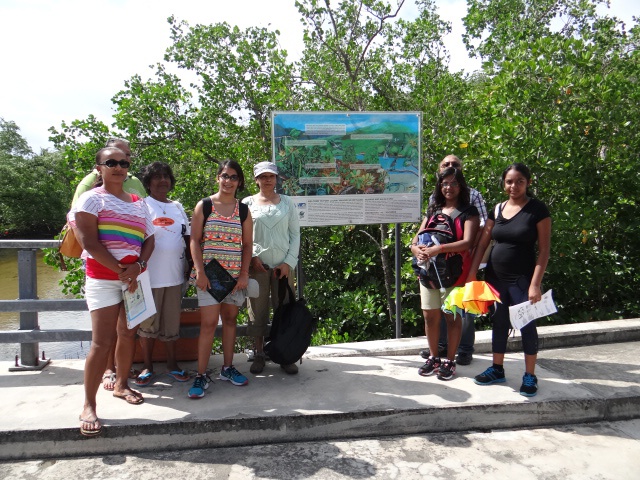 The Mauritian delegation stops for a group photo beside an information board about the natural mangrove wetlands at Port Launay. (Jeanette Larue, Seychelles Ministry of Environment)

The pupils visited several coastal sites in the 115-island archipelago situated in the western Indian Ocean and were able to compare the neighbouring island nations’ efforts at combating the effects of beach erosion as well as the threat it poses to vulnerable coral reefs and mangrove forests.

They were accompanied by the college's deputy rector, Sita Ramlugum, who was the project coordinator in Mauritius.

The exchange programme, operated within the framework of the Southern Africa Development Community (SADC), was funded by the Deutsche Gesellschaft für Internationale Zusammenarbeit (GIZ) in Germany.

Terry Mousbe of the Environment Education Section of the Ministry of Environment and Energy and project leader for the programme in Seychelles, says three Seychellois students from various secondary schools will be travelling to Mauritius in mid-February for a similar exercise.

While the Seychelles programme focusses on beach monitoring, the Mauritian students have said they have found Seychelles’ progress in coral reef restoration even more interesting.

The Mauritian students met with forty peers from English River and Beau Vallon schools, and together watched a presentation on the impact of climate change.

"This focussed on the various impacts of climate change and what can be done to reduce such repercussions," Mousbe said.

They also travelled to Beau Vallon beach, where they were issued with equipment for beach profiling. This involves measuring the amount of sand on the beach, which when compared with data two months before or after, indicates whether it is being restored or erosion is worsening.

The tour also took the young Mauritians to the Port Launay mangrove wetlands in the north-west of Mahé, which is the best remaining example of a healthy mangrove forest in the Seychelles' granitic inner islands. It was declared a Ramsar Convention site in 2007.

"Besides snorkelling I was keen to visit the marshland, where there are six mangrove species. In Mauritius, we only have two," Shairee Deoranam, one of the students, told SNA.

Mangroves are a vital component of the original vegetable cover in the Seychelles and play a significant role in storm damage limitation as well as reef and coral life protection.

Her colleagues, Jeshna Itoo and Shexinah Dayala were more interested in the sea and the different coral species found in Seychelles.

They told SNA that dolphins can be spotted at Tamarain and Le Morne, both on Mauritius' west coast at a certain time of the year.

Mousbe said that dolphins are fairly common around Mamelles Island, which lies around 12 kilometres from Victoria and more infrequently at Beau Vallon.

"In recent years, we have been sensitizing people to keep our public beaches clean. We are for instance, putting bins everywhere. Several NGOs are involved. As part of our project, we have regular beach cleaning," said Dr Jaya Naugah of the International Journal of Gender, Science & Technology, who was also part of the Mauritian delegation.

Mauritius, which attracted just over one million tourists in 2014, is shortly expected to announce a temporary freeze on construction of hotels, amid fears that large hotels are occupying too much of the beach landscape.

Before leaving Seychelles on Saturday, the group also visited Anse La Mouche, on Mahé’s west coast, which had been severely hit by coastal erosion, but after a concerted effort at rehabilitation, the area has been turned into a promenade and children's playground, with new trees and shrubs.

S. Ragoonaden, from the Association for Sustainable Development in Mauritius, told SNA that like Seychelles, Mauritius has been experiencing increasingly heavy rainfalls over very short periods of time, which he believes is a consequence of climate change.