Seychelles can still do more to protect its environment, says renowned local environmentalist 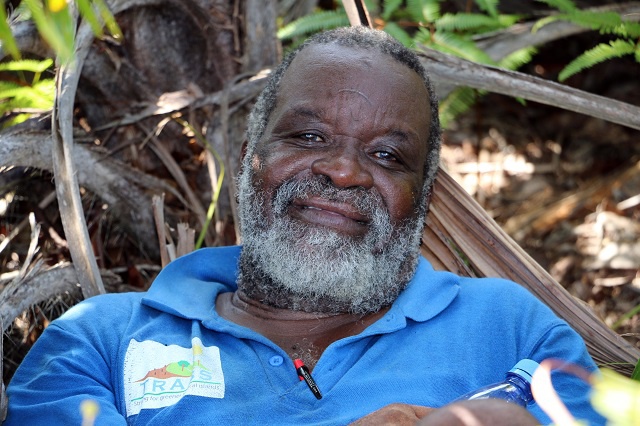 (Seychelles News Agency) - Victorin Laboudallon’s bearded, jovial face has become recognised and respected as a leader in environmental conservation in the Seychelles islands over the past 37 years.

A person of reference on matters of conservation and rehabilitation, Laboudallon retired in December last year on Praslin Island, the second most populated island of the Seychelles archipelago, where he has worked tirelessly to protect the vulnerable coco-de-mer palm and research the endemic plants and species, including the Seychelles Black parrot.

Once a singer in his youth, Victorin has passed on his knowledge to the young generations through his non-governmental organisation, TRASS, through several published pieces of research and by serving on many environmental bodies, including the Seychelles Island Foundation (SIF) which manage both the Seychelles’ World Heritage Sites of the Aldabra atoll and the Vallée de Mai national reserve on Praslin.

Acquainted with most of the islands of the archipelago, Laboudallon was recently honoured by the Seychelles government, which named a plant after him.

Laboudallon says his love for nature stems from his ancestors, once from a tribe living close to the Zambezi River in Mozambique who were taken as slaves centuries ago by Arab slavers. Intercepted by British fleets and freed in the British colony of Seychelles, his people were among some of the first students of the Venn’s Town, a missionary school located in the great heights of Sans Soucis, near the peak of the imposing 900-metre high Morne Seychellois, built by British missionaries to educate the children of the liberated slaves.

SNA: Your first book Flora of the Seychelles: A Field Guide to Selected Plants with Steen G. Hansen has been a tremendous success especially with bookseller nhbs, based in England. After so many years, why did you decide to finally launch this book in April last year?

VL:  I have always wanted to record my knowledge and experiences in the field but getting funds to publish a book is hard. The project was always there, we had abundant information but we still needed photos and that took a while. I am proud of the outcome with 300 plants and almost 700 pages; it has been well received here in Seychelles where it is selling at 600 Seychelles Rupees (around $44) per copy and abroad as well.

It is a book of reference for students, researchers and the nature lovers. I think it is good for people to know more about their environment, especially when you live in a country with lush vegetation like the Seychelles. With funding, I hope to do a second one which will be bigger with more plants and clearer classifications of both endemic and indigenous plants.

SNA: What are some of your success in the field of environment?

VL: I have contributed towards many researches many of which were published.  For example I was co-author in the paper on the breeding biology of the Seychelles Black Parrot (Coracopsis barklyi), [an endangered endemic bird which lives only on Praslin island, with a population of less than one thousand], which appeared in the Wilson Bulletin of 1986 and which remains a point of reference on the species. I also worked on a paper with the Arizona State University on identification of medicinal plants and also with the Cornel University on bird biology. I have also received an award from the U.S Fish and Wildlife Service for capturing a sooty tern (Onychoprion fuscatus) on Desnoeufs, an outer island of the Seychelles.  The bird was tagged twenty three years before in South Florida. But my greatest achievement was when the Seychelles National Herbarium named a newly-discovered plant after me.

SNA: Tell us about the plant Ptisana Laboudalloniana locally known as ‘Pti locally baton monsenyer’ or potato fern? Did you yourself knew of its existence and how do you feel about the nomination?

VL: (Laughs) I used to play in these areas of Sans Soucis as a child and that fern is so unlike me. It breaks easily! It is found in areas of high altitude on Mahé [the most populated island of the Seychelles]. But I’ve never felt as proud as I did that day. After I am gone, even in 50 years’ time, people will refer to that plant and will know who I am. There are so many foreigners that have put their mark in Seychelles history and I am proud that it is a Seychellois this time round that has been recognized. I am grateful to the Belgian consultant, Bruno Senterre, who found the plant during a key biodiversity study conducted by the National History Museum of Seychelles.

SNA: What are some of the different islands you have worked on in the past?

Out of the 115 islands of the Seychelles archipelago I have worked on 107 of them, mainly for research. Amongst the granitic island I love Fregate Island, more because it has a rich history. It is believed that the pirates based in Cap Ste Marie, in Madagascar, used it as a transit point and their defence wall they constructed on the island still exists today. It is also a very rich island with guano [bird’s droppings which are rich in phosphorous and used as fertilizers. Guano was exploited on many islands of the Seychelles in the 1800’s] and fruits and other trees are very abundant there. It is more fertile than other island of the Seychelles inner island group.

Of the coralline groups or outer islands, I think Aldabra is the most extraordinary. It is believed that the atoll has sunk at least three times in the past. The relics are there, for example at Pointe Hodoul, there are basins of animal skeletons clustered together where they have died, and today, corals and trees have grown on their resting place. It also has interesting vegetation which includes some plants that are rarely found in other islands of the Seychelles, such as bois fourmit and bois sandale.

SNA: In your quest to save the environment, for 37 years, you have helped uphold the law on Praslin. What was your role as a Conservation officer and how easy has it been to discharge such a responsibility?

I am originally from Mahé and I came to Praslin to work on the neighbouring island of Curieuse. When I came in 1981, there was a lot of poaching, especially of sea turtles, but then the government banned such practices and I had to enforce that. It was hard as people were used to eating many of those things which the law now decreed as forbidden or protected. I worked on all the neighbouring islands, including Cousin and Cousine.

We have done a lot to create awareness on environment issues and we have good laws in place to ensure that we, the Seychellois as a nation, are protecting what we have. There are good international laws but enforcing them is our major setback. People continue to break the law with regards to poaching because they see nothing being done. It’s a major problem. Take the coco-de-mer [endemic nuts of Seychelles, which grow naturally only on Praslin and Curieuse Island], people steal the nut, they are caught, evidence is taken, but it does not go further than that. I have so many of these cases that have been pushed aside, stuck somewhere in a police file or in court. I have seen poaching of every kind including sea turtles and dolphins.

We have successes, when we compare ourselves to other countries but we can do so much more. We have a law that says don’t throw rubbish in the streets. The law is there but who is going to enforce it? Seychelles is so small that no-one wants to make enemies with their neighbours or create conflict with someone else. Even law enforcement officers do not want to do that. I have seen this many times during the past 37 years and even now, I still get reports of poaching or people asking me for advice on endemic trees or birds and I am happy to help.

SNA: Is there something you wish you had done more with regards to environment protection here in Seychelles?

There are virgin islands of Seychelles such as Cosmoledo and Alphonse that have not been thoroughly researched and sadly they are being destroyed by invasive and introduced plants and animals. I wish I had done more to help tackle this problem. For years I worked on islands such as Ile Denis, Curieuse and Cousine, trapping animals that have been introduced. On Cousine Island, which is located close to Praslin, out of 27 hectares, we caught 115 cats in the late 1980’s.

Rats, cats, mynah birds are some of the other species that needs to be eradicated on many of the Seychelles islands or they will destroy our native fauna. Closer to home, many of our mountains are facing the same threats and so are our endemic birds and other species and if we are not careful, we may lose a lot of unfound treasures.

SNA: Are the far-away islands more protected than the inner islands?

Yes, they are but there are other dangers. On Cosmoledo, for example, I found lots of words written in the Malagasy language and during our expedition we found illegal yachts moored in the lagoon. Unless you are in a plane you will not know if there are intruders, especially as there is no one living on this island. Our archipelago is so vast that we are almost unable to protect it. Who knows what else goes on in these islands without our knowledge?

SNA: In 2009, you also launched your own non-governmental organisation called the Terrestrial Restoration Action Society of Seychelles (TRASS). What is the aim of the group and how successful has it been in restoring areas affected by forest fires in Seychelles?

We are the only non-governmental organisation with expertise in this domain here in Seychelles. We are called upon as consultants but also as volunteers to help, although we have been concentrating our efforts of restoration on Praslin Island, which has been plagued for many years by forest fires. When a fire occurs on government land, it is rehabilitated, but this is not the case for private land, as there are no laws for that. This is why many hilltops remains bare and after a while becomes barren. This is when we come in.

We study the land, used different techniques and when we are ready we start rehabilitating. Sometimes it takes months of monitoring, sometimes years.  We started out with 20 volunteers but after seven years, people in the community know about our work and are always willing to help us whenever we have a new project. There is so much to be done and slowly we are getting there.

Jasper the island-hopping dog could be a Seychellois stocking stuffer