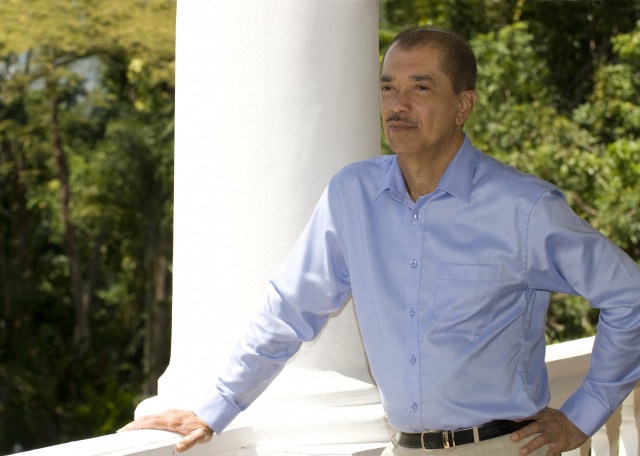 President of the Seychelles, James Michel (Riccardo Roccardi, Office of the President)

(Seychelles News Agency) - With only a year before Seychelles holds presidential elections, the leader of the ruling Parti Lepep (People’s Party), President James Michel, has announced that he intends to run in the 2016 elections.

In an email interview with SNA, Michel confirmed the headline of an article published last week in The People newspaper, the mouthpiece of the ruling party, and further elaborated on statements he made in an interview he gave to Mauritian newspaper Le Mauricien.

President Michel, aged 70, is preparing for what he says will be his third and final term of five years at the helm of the government of the 115-island archipelago off the eastern coast of Africa.

Although the announcement of a presidential candidature is usually only made after receiving the go-ahead from the political party concerned, this time around it has not been the case.

“It is my choice to introduce myself and say openly to journalists who ask me this question, but of course I will present my candidacy for Congress, and Congress will decide if I am their candidate,” said the president.

Michel also put paid to any uncertainty about who his running-mate would be for the next elections, confirming to SNA that current Vice President Danny Faure would remain in the number two position on the party’s ticket.

According to the head of state, he believes he is the only candidate interested in running for presidency under Parti Lepep, adding that if there were to be another candidate, that person should first receive the support of the district committee, which would then be presented to the party Congress.

Local media have already begun to speculate that the head of state will take a gamble and call early elections before the end of this year.

Responding to these rumours, Michel says he has not yet made a decision yet, adding that the matter was still “to be decided.”

The head of state downplayed his advancing years, saying he felt strong enough to lead the country for another term.

In what will be his last election fight according to the constitution of the Seychelles, Michel plans to win the election with confidence.

“Based on this assessment, I am confident of winning the next election, but at the same time, I also found that we have a fragmented opposition in Seychelles, a weak opposition.”

In Seychelles, the Parti Lepep (known before 2009 as the Seychelles People’s Progressive Front or SPPF) has been in power since 1977, and a number of opposition parties including the Seychelles National Party (SNP) and the People’s Democratic Movement (PDM).

For much of the rule of former President France Albert René, the Seychelles was a single-party socialist state, but in 1992, however, the government passed a constitutional amendment legalizing opposition parties, allowing the return of a number of exiled opposition supporters and leaders.

The SNP, which is the main opposition party in the 90,000-population island state has already begun rallying its supporters after nearly four years of relative inactivity.

The SNP, which boycotted the 2011 parliamentary elections, announced its intention in January to participate in the upcoming presidential elections after election laws were amended late last year. The party is led by Anglican Reverend Wavel Ramkalawan,

James Michel was the Vice President of the country between August 1996 and April 2004, succeeding former president France Albert René when he stepped down that year.

In the election of July 2006, Michel was elected with 53.7 percent of votes in the first round, his SNP rival Ramkalawan taking 44.71 percent of the vote.

In the presidential elections of May 2011, Michel won in the first round with 55.46 percent of votes, with Ramkalawan taking 41.43 percent. Ramkalawan later announced a boycott of the parliamentary elections which followed, calling for electoral reforms.

Ramkalawan also participated in the presidential elections in 1998 and in 2001 against former President France Albert René, who won both.