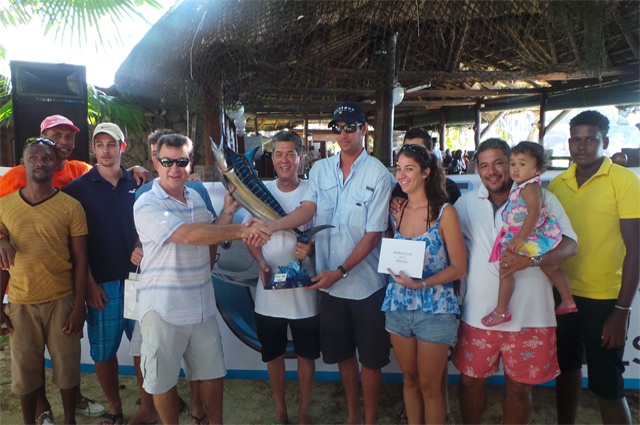 (Seychelles News Agency) - Team Island Star and its crew of 10 is the winner of the 2015 Marlin Slam tournament, which kicked off this year’s calendar of fishing competitions in the turquoise blue waters of the Seychelles’ islands.

Overall winner of the tournament for the second consecutive year, Island Star pocketed a little over $5,000 for bringing in 42 kilos of fish ahead of team Bob Marlin Express that brought in 35 kilos.

In spite of coming out on top bringing in the best total catch, Island Star did not manage to take home the coveted star prize of $18,000 which was up for grab for the heaviest marlin caught.

Unfortunately, none of the 14 boats that took to the starting line last weekend were lucky enough to catch a marlin this year, which Island Star’s Skipper Antoine Hoareau described as “most disappointing.”

Speaking to SNA, Hoareau attributed the misfortune to bad weather, noting that it was quite wet which made the conditions difficult to catch long spear or sword-like upper beak fish.

The Marlin Slam which the organizers have described as the largest-ever game fishing event to take place in the region this year, also saw SSFC join hands with Bisbee's Fish & Wildlife Conservation Fund to have the 2nd Seychelles IGFA (International Game Fish Association) Great Marlin Race. This is aimed at getting anglers to combine recreational fishing with science particularly to learn about the basic biology of marlin and how they utilize the open ocean habitat.

In last weekend’s competition, marlins weighing less than 100 kilos were to be tagged using what is known as pop-up satellite archival tags and released back into the open sea after which their movement is monitored.

The crew whose fish travel the furthest during a period extending over 180 days, would then be declared the international race’s winner, with the prospect of winning a trip to the US as well as other prizes.

“Satellite signals from the fish are picked up only when they emerge from underneath the waters, which most probably means they have been caught by other fisherman, or eaten by sharks which in turn has been caught,” Hoareau explained to SNA.

Sports fishing enthusiasts in Seychelles are viewing their participation in such a worldwide competition as a great opportunity.

“It would be an honour to win the esteemed event, as it would give game fishing here its right place in the world of sports fishing,” Island Star’s skipper Antoine Hoareau told SNA.

While no marlin was caught last Saturday, Island Star did catch two marlin during the first Great Marlin Race organized by the SSFC last year, and one was entered into the global competition.

Two other marlin were entered into the competition by locals last year, however both fish have emerged after traveling 153 nautical miles and 600 nautical miles respectively.

“My marlin; that of the Island Star that is, is still out there covering kilometers, hopefully enough to win us something. Their continued survival encourages me to keep at this exercise yearly, knowing I am part of something to help understand the movement patterns of these fish,” said Island Star’s Antoine Hoareau.

Speaking to SNA after the first competition this year, SSFC’s secretary Grant Heyer said sports fishing can only be encouraged in Seychelles with an effective conservation mindset of all of those in the industry.

“As we get more and more tourists arriving to participate in sports fishing, our anglers and charter companies need to emphasize the conservation mindset to all visitors so the fishery remains healthy and can be sustained,” said Heyer.

Going back to the Marlin Slam tournament Seychelles' anglers are now looking forward to the next year's tournament as the prize money for the heaviest marlin that has not been won will be doubled in 2016.