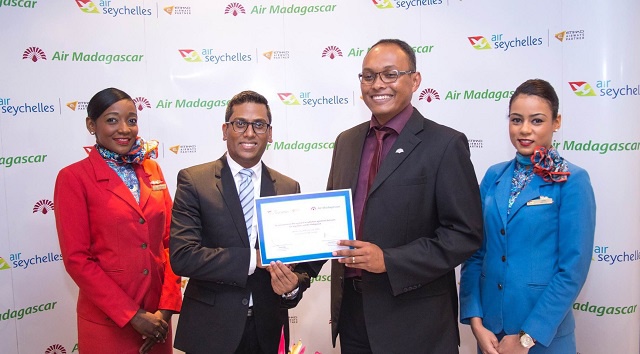 (Seychelles News Agency) - Barely two months after the first Air Seychelles aircraft landed in the capital city of Madagascar, Antananarivo, the national airline of the Seychelles has entered into a codesharing agreement with its Madagascan counterpart, Air Madagascar.

Flights between Seychelles and its neighbouring Indian Ocean island state of Madagascar re-commenced on 3 December 2014 after a hiatus of 33 years.

Air Madagascar was created in 1947, and after Madagascar received independence from France in 1960 it became the country’s national airline, operating services to Europe, Asia and neighbouring African and Indian Ocean island destinations, as well as an extensive domestic network.

Guests on both airlines benefit from a wider range of connecting flight options under agreement, with Air Seychelles customers now able to enjoy additional connection opportunities on Air Madagascar services to 11 cities in Madagascar and other key regional destinations, including the Comoros, Johannesburg, Mauritius, Mayotte and Reunion.

According to Air Seychelles’ Chief Executive Officer, Manoj Papa, the airline’s commencement of flights to Antananarivo have “significantly bolstered the trade and tourism ties” between the two island nations.

“Travellers from Madagascar are now a short journey away from Seychelles, which offers onward connections to attractive destinations across Air Seychelles’ expanding international network,” he said.

Papa said discussions on further collaboration between the airlines were ongoing. Customers using the codeshare flights may soon be able to benefit from frequent flyer programmes and shared lounge access.

Air Seychelles operates a two-class Airbus A320 on the Mahé-Antananarivo route, with 16 seats in business class and 120 seats in economy class, offering more than seven tonnes of weekly belly hold cargo capacity.

For Madagascar, gaining easier access to the Indian subcontinent and the Middle East is a vital step towards developing new trade and leisure opportunities.

“There is great demand amongst our customers to travel beyond the Seychelles to these regions, which this codeshare agreement allows,” said Haja Raelison, Air Madagascar’s Chief Executive Officer.

“We look forward to developing our partnership with an even greater number of business and leisure guests travelling between Madagascar and Seychelles.

The history of the Seychelles archipelago of 115 islands, situated 1,500 km off the coast of East Africa, is strongly tied to the history and culture of the people of Madagascar, with a large proportion of Seychellois Creoles being made up of East African and Malagasy origin, and the roots of Creole dance, song and cultural beliefs are connected to both regions.

Madagascar is home to some 22 million people of a number of ethnic groups, including Austronesian people from the Indonesian island of Borneo who arrived on Madagascan shores in outrigger canoes between 350 BC and AD 550, and African Bantu people who crossed the Mozambique channel to settle on the island a thousand years ago.