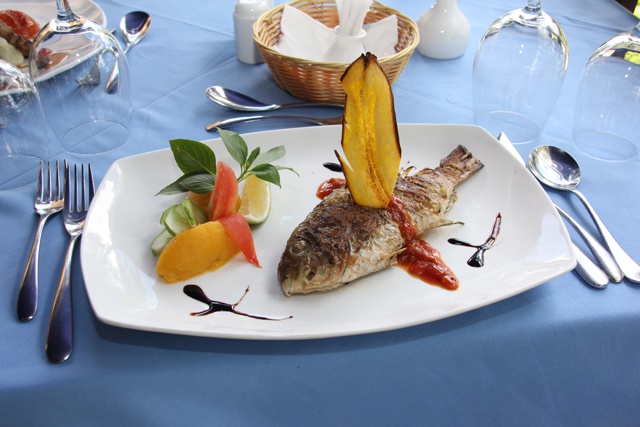 Freshly-grilled fish is one of the traditional sources of nutrition for the population as well as a popular choice for visitors to the islands, although increasing demand due to a growing population has led to fish prices increasing sharply in recent years. (Romano Laurence, Seychelles News Agency)

(Seychelles News Agency) - The presence of mercury in fish has for years sparked debate on whether eating fish is a good thing or not.

The odourless substance, found in the environment as a result of both natural and human activities, is deposited in the world’s ocean floors and is thus transferred to fish.

Pregnant women were especially advised to stay away from fish as an accumulation of the neurotoxin was said to have negative effects on child development.

But after three decades, researchers have proven that this is not the case.

“We believe that the benefits of fish far more exceeds the effects of the presence of mercury in their flesh,” says Seychelles researcher, Doctor Conrad Shamlaye in an interview with SNA.

Shamlaye was part of a cohort of researchers and scientist who participated in the three decades long study in order to examine and verify the effects of the consumption of fish in the development of children.

The Seychelles population of 90,000 people has a long tradition of eating fish as a primary source of protein - so much so that fish is consumed daily and at least 20 times on a weekly basis, which is ten times more than any countries in Europe and in the United States.

Using funding from the European Union and various international universities such as the University of Rochester Ulster, as well as with the support of the Seychelles government, the studies looked at 1,500 mothers and their new-born children, by assessing and monitoring them for thirty years.

“With the consent from volunteer mothers, we took a sample of their hair to check for their level of exposure to mercury prior to giving birth. We also did lots of tests on the children throughout the years in order to establish if there were any neurological defects,” explained Shamlaye in an interview with SNA.

“We found no clear side-effects of mercury in the children. Instead, we found that those mothers and children who were consuming more fish that contains other nutrients such as Omega 3 and other fatty acids, performed better in some of the tests,” said Shamlaye, explaining that this sample represents at least ten percent of the archipelago’s population.

“Thus people should eat more fish as it helps in the brain development, especially in children and provides all the good things that is needed to stay healthy.”

The study which is considered as the longest study to have ever been conducted has been re-published in many journals and medical websites.

Shamlaye who was one of the local investigator of the Seychelles Child Development Study says these children, now in their 20’s, and their parents, who are now mostly in their 50’s, are still being followed for instances of cardiovascular disease, Parkinson's disease and dementia, which are also often linked with high exposure to mercury.

“At any one time, we have different groups of people working on the study including local laboratory personnel, nurses and researchers throughout the thirty years,” adds Shamlaye.

In view of these findings published in the American Journal of Clinical Nutrition, many international agencies are revisiting their guidelines concerning the consumption of fish.

The study did not however look at how the fish were cooked although with a high incidence of obesity in the archipelago, the highest in sub-Saharan Africa, too much frying is discouraged by the Seychelles Ministry of Health.

Albeit the benefits, Shamlaye conceded that a variety of fish is more advisable as some especially deep see fish such as sailfish have more mercury than fish that are caught in artisanal fishing close to the shores.

Similarly, he adds that some fish, such as mackerel, are richer in beneficial fatty acids than others.

With a steadily increasing population, the cost of fish in the archipelago has also risen in recent years.

This has given rise to a new tendency of the local Indian Ocean Island population towards eating more meat which is cheaper but Shamlaye says “it will be a shame if the trend of eating fish is reversed, given all the benefits that it can bring.”