Caught in the act! First Coco-de-Mer poachers of the year arrested in Seychelles 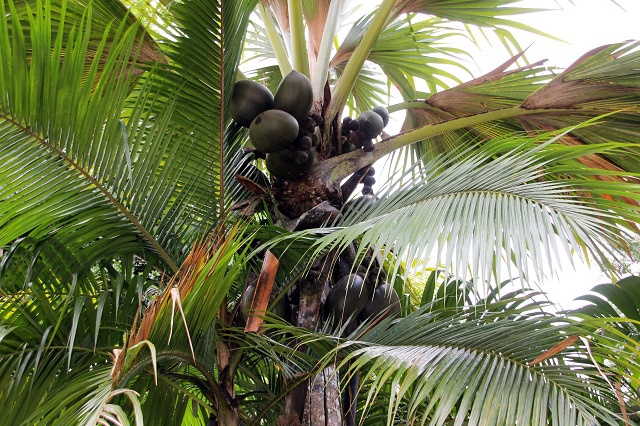 (Seychelles News Agency) - Merely a month into 2015, the scourge of poaching rare and valuable Coco-de-Mer nuts has started once more on Praslin, the second most populated island of the Seychelles archipelago.

According to the Seychelles National Parks Authority (SNPA), earlier this week officials stationed on the island caught two men breaking coco-de-mer nuts from palm trees in a protected area of the island.

“Altogether we seized six nuts,” said Allen Cedras, a representative of SNPA on Praslin. “Three were mature whilst others were still in their husks. The poachers had also consumed three small nuts, of which we found content and empty husks on the ground.”

“They had climbed one tree, felled the [Coco-de-Mer nuts] they could take, and ate what was too small to sell. They were in the process of clearing the second coco-de-mer tree when they were interrupted,” he told SNA.

The largest nut in the world is a prized possession for many visitors and it is considered rare delicacy amongst the population of 90,000.

In October, staff from the Seychelles Islands Foundation at the UNESCO World Heritage Site, the Vallée de Mai, reported that one of the most iconic female coco-de-mer palm trees, thought to be over 40 years old, had been ravaged by poachers in the natural palm forest, who stole a total of 18 nuts.

The coco-de-mer nut is the world’s largest seed and is listed as “threatened” on the International Union for Conservation of Nature (IUCN)’s Red List.

The kernel of the mature palm, located inside the nut, sometimes touted as an aphrodisiac in Eastern cultures, can be eaten and the suggestively-shaped outer shells are sold as souvenirs for tourists under license from the Ministry of Environment.

Poaching has been occurring on an increasing basis on Praslin and neighbouring Curieuse Island where the coco-de-mer grows in its natural state, despite efforts to continue to protect the nuts that take many years to grow to maturity.

Cedras says the incident occurred late in the afternoon, a little before the end of office hours. According to him, this is the usual time poachers do their dirty work as the tall trees are often located in difficult areas that makes it impossible to get to the trees in the dark.

But this time round the poachers were very daring as the incident occurred within 500 metres of the living quarters of several Ministry of Environment and SNPA staff.

“There was a loud cracking noise as the huge nuts [which can weigh up to 35 kilograms] were smashed on rocks. The staff who lived close-by alerted us and two of them went to check it out,” says Cedras, adding that “we came close enough to identify one of them. They left everything behind and took off.”

The incident was reported to the police and the remains of the nuts were taken into evidence. After a brief investigation and search for the man who had been identified, both suspects were taken into police custody.

“We were shocked that they had come so close to our offices and houses,” says Cedras. He noted that the National Park of Praslin, Fond Ferdinand and Vallée de Mai, a UNESCO world heritage site managed by the Seychelles Island Foundation, are often targeted by poachers.

“This is a good beginning to the year and we hope it continues like this so that we can prevent poaching of protected species and with collaboration with other partners prosecute those who are breaking the law. This is the only way we can continue to protect our endemic flora and fauna”.

As for the poachers, they can be prosecuted under two laws. For being in a demarcated protected are, they are eligible to be charged under the National Park and Nature Conservancy act and also for being in possession of a protected species, under the Coco-de-Mer decree.