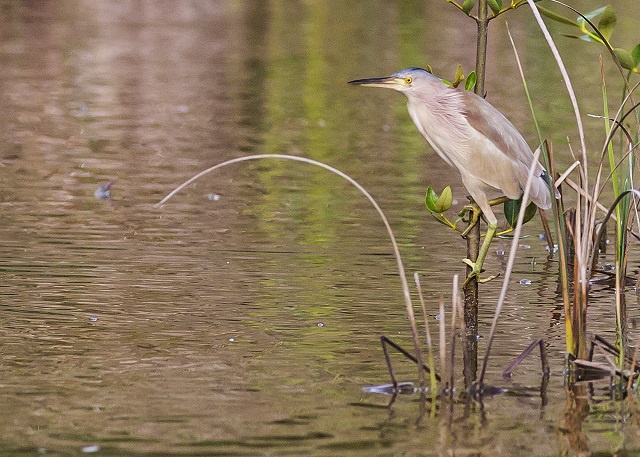 The Yellow Bitterns are found on three islands, Mahe, Praslin and La Digue in the Seychelles archipelago (C Edwards)

(Seychelles News Agency) - Adrian Skerrett is British businessman, author and conservationist who was born in Stoke-on-Trent in the UK, and came to Seychelles to live when he was 27 years old in 1980 and has been a resident ever since, becoming a national of the Indian Ocean nation in 1994.

So when in February this year, Skerrett wrote an article titled ‘The next extinction in Seychelles?’ which appeared in the local daily newspaper Seychelles Nation, he raised an alarm within the conservation community about the fate of the Yellow Bittern, a shy small bird species with a pale beige plumage  found breeding in the Seychelles that is also found in many countries of Asia and islands of the eastern Indian Ocean.

Globally the species is classified by International Union for Conservation of Nature (IUCN) as being of ‘least concern’ of becoming extinct. However, Skerrett is concerned by the reduction in sightings, he has recorded of the native population in Seychelles, although a wide-ranging study has not taken place recently.

The last study of the population of the Yellow Bittern undertaken was co-authored by Skerret in 2002, which put the initial population at 228 birds but now he believes that within the last decade its population has experienced a fast decline to not “more than 100 bird left in total, if not fewer.”

He adds that the Seychelles islands are the only country where the Yellow Bittern or Ixobrychus Sinensis is found in the African region.

Also known as “Chinese Bittern,” the small bird from the heron family is believed by some to be a recent colonizer of the Indian Ocean islands whilst others believe it is one of the first ever recorded native birds in the islands.

The Wildlife, Trade and Conservation Section in the Seychelles Ministry of Environment, Energy and Climate Change says this bird species has not elicited as much attention from conservationists locally as priority for research and monitoring is given to endemic birds of the archipelago, such as the 13 existing endemic species, recognised by BirdLife International, which is the authority used by the IUCN for its Red List. Last year, the Seychelles Black Parrot was added to the list of Seychelles endemic birds.

Conservation of the endemic versus the indigenous native birds

Renowned for its unrelenting efforts in conservation, Seychelles with a population of 90,000 people, has worked to save from extinction many of its endemic birds.

In recognition of its efforts, in 2013, the International Union for the Conservation of Nature (IUCN) downlisted several bird species from the islands from the ‘critically endangered’ category of the Red List criteria including the Seychelles Magpie-Robin and the Seychelles White-Eye, as their population have grown through various conservation programmes.

To date, only the Seychelles Paradise Flycatcher remains listed as ‘critically endangered.’

“Endemic species are confined to a particular geographical area…but the Yellow Bittern is native to Seychelles. Any threats it faces within one locality will not impact on the species in general because it will not go extinct at the global level,” says Ronley Fanchette, Director of the Wildlife, Trade and Conservation Section, in an e-mail interview to SNA, adding that these small birds can be found in large numbers in several Asian countries and it came to the islands as “it was probably blown out of its usual migratory route.”

He adds that all species that breed in the Seychelles are of importance but that funding of their conservation is allocated according to priority.

“We provide necessary mechanisms to ensure their long-term conservation. There are however constraints so we have to prioritize based on availability of resources; priority level and significance of conservation efforts will be given to endemic species over native ones. They are both protected but where allocation of resources is concerned, our priority should be clear and focused,” said Fanchette.

This view is also shared by Dr. Nirmal Jivan Shah, the Chief Executive of Nature Seychelles, a local partner of BirdLife International.

In an e-mail statement to SNA, Shah argues that “I don’t feel the Yellow Bittern has been forgotten. As a very small country with very limited resources and facing many critical environmental challenges, we have by necessity to prioritize our actions and efforts; widely distributed species such as the Yellow Bittern would, unfortunately, be lower down on the action list compared to many Seychelles endemic species across many animal and plant groups that need conservation action.”

Shah also adds that more international funding is necessary for wetlands restoration, which would benefit the Yellow Bitterns.

"We cannot get international funding to save the Yellow Bittern in Seychelles as we did with the endemic birds, so I would think we need a major donor project to restore wetlands as critical habits and use the Yellow Bittern as a key indicator species for ecosystem health,” says Shah.

Could the Yellow Bittern in Seychelles be a sub-species?

Skerret, however, expresses regret that conservation bodies focus their energy on endemics to the detriment of other threatened native species.

According to Skerrett, the first comprehensive list of the native birds of Seychelles was compiled in 1867 by Edward Newton.

“Newton collected two Bittern specimens at Beau Vallon, now held at the UN Natural History of Museum, proving beyond doubt that the species is a long-term resident of Seychelles”.

DNA studies on the bird have not been done, but Skerrett has noticed that their measurements differ to their Asian counterparts, so he speculates that they might be endemic.

This is an “unfair” case according to Skerrett, who told SNA that, “no one has done a study to find out if this is a different sub-species to the one found in Asian countries but unless we save this bird, we may never know.”

In 2002, the shy birds were found in six marshes on Mahe, the most populated island of Seychelles. These included North East Point and Beau Vallon in the north, Roche Caiman bird sanctuary in the east and in marshes in the west of the island notably coastal areas at Anse Gouvernment, Anse Intendance, Cap Ternary and Police Bay.

A number of these wetland areas have hotel developments next to them which integrate the wetlands features into their hotel design, while other wetlands have been reduced in size due to housing and road developments.

“New population of species that established themselves naturally may or may not succeed to become a successful addition to a locality’s wildlife,” says Fanchette adding that the presence of predators, lack of nesting sites, loss of habitat as other factors that can be a detriment to a new species colonizing a new habitat.

According to Shah, the first study of the Yellow Bitterns in the 1970’s estimated the population at less than 100 pairs.

“Wetlands of the kind preferred by this species have been on the decline since colonisation.  At the Sanctuary at Roche Caiman, Nature Seychelles is protecting some breeding pairs of Yellow Bitterns but recent works by PUC [Public Utilities Corporation] has opened our fence and allowed packs of feral dogs in, again which may prey on species like the Yellow Bittern.”

Efforts to move the birds to other islands

Several attempts have been made in the past to save the Yellow Bitterns in Seychelles.

In a research paper published in the East African Wild Life Society Magazine in 2002, Skerrett teamed up with Seychellois scientist Dr. Justin Gerlach to propose several solutions including the demarcation of several key areas that could serve as sanctuary for this species and other birds.

Efforts to implement translocation of the Yellow Bitterns were also mentioned as unsuccessful on islands such as Aride and Curieuse.

A sole bird was sighted on Desroches Island, the largest of the Seychelles corraline islands which unfortunately, does not have large wetland areas, resulting in the bird dying thereafter.

In 2002, Skerrett proposed Silhouette Island as an alternative habitat for the Yellow Bitterns.

With over 15 hectares of marshes, the island could have easily accommodated all the existing birds and save them from extinction, explained Skerrett to SNA.

But in the absence of recent scientific data, its lack of protection, coupled with the Yellow Bittern’s inconspicuous manner, these translocations never took place.

“It’s not impossible to save these birds”

According to Skerret, the best place to find Yellow Bitterns is amongst the reed beds in the marshes of Baie Lazare surrounding the luxury hotel of Kempinski Resort in the west of Mahe Island.

This is one of the few locations where this species have been seen recently feeding on amphibians, fish and insects in the wetland.

One has to be cautious though because any sudden movement might cause it to take flight displaying black feathers under its wings and giving out harsh ‘kakkak’ calls.

“It is not impossible to save these birds,” says Skerrett, “We just need a concerted effort. It may not be one of our endemics but it is an important species; that creates a balance in our ecosystem. Losing one might means losing another!”

Amongst other native water birds, several have settled for the Seychelles including the Grey Heron and the Squacco Heron.

According to Skerrett, only the Black-crowned Night Heron has naturally colonized the archipelago since human settlement and its existence is equally precarious to that of the Yellow Bittern.

According to the Seychelles Bird Records Committee, there are 267 species of birds that have been recorded in Seychelles. This includes 62 breeding species, 28 annual migrants, 167 vagrants and ten extinct species (four of which were introduced).