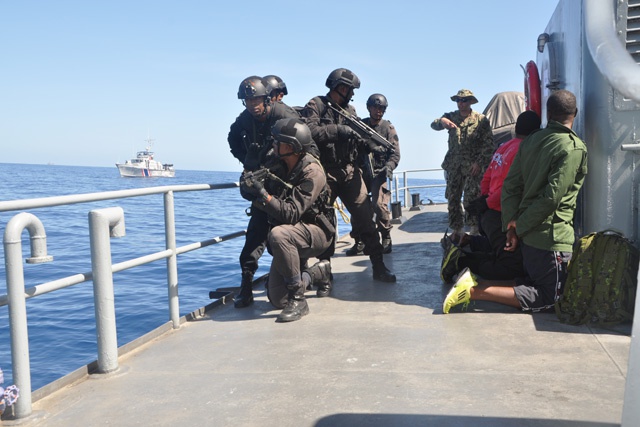 The Cutlass Express exercise aims to bring together regional forces so that they can collaborate on ways to better tackle maritime security concerns.(Seychelles Coast Guard)

(Seychelles News Agency) - The Seychelles maritime forces have been able to test and enhance their abilities to detect and respond to a range of crimes committed on the high seas following their participation in a regional military exercise.

Some 70 members of the Seychelles Coast Guard (SCG) and Seychelles Air Force (SAF) led by the island nation's coastguard's naval wing commander, Lieutenant Colonel Simon Laurencine, returned to the Indian Ocean archipelago from the neighbouring island nation of Mauritius on Tuesday after taking part in the Cutlass Express 2015.

This year was the fourth time such a collaborative exercise was organised with the aim of bringing together regional forces to tackle maritime security concerns in the region.

Speaking to SNA in a phone interview, the commanding officer of the SCG, Lieutenant Colonel Simon Dine said the exercise “went very well”, adding that it was an opportunity for the participating maritime forces to improve regional cooperation and information sharing so that they could better detect and respond quickly to maritime crimes in the East African and Indian Ocean regions.

The Indian Ocean islands of Seychelles, Mauritius, the Comoros, Madagascar as well as eastern and southern African countries including South Africa, Kenya, Djibouti, Uganda, Mozambique among others took part in the training which is organised and funded by the U.S. Africa Command (Africom).

The eight-day exercise comprised of both shore-based exercises as well as at-sea scenarios held over three days, which was the main focus of the training.

“During the three days at sea we had to deal with different scenarios. The first one tested the participants’ ability to deal with a vessel that had been hijacked by pirates and this was handled well. We also had scenarios which involved fisheries protection and another involving illicit drugs trafficking,” Lt. Col. Dine explained to SNA.

“At the end of the exercise the organisers were satisfied with the performance of the forces and for the Seychelles team, based on past experiences this has proven the ability of the military personnel to deal with such maritime crimes.”

Seychelles deployed two of its patrol ships, PS Constant and PS Andromache, on January 23 as well as the SAF Dornier aircraft on January 29 for the exercises.

According to the commanding officer of the SCG, most of the at-sea exercises were carried out by the Seychelles vessels and aircraft as Mauritius was the only other country that had deployed patrol vessels and aircraft, while the other participating countries had only sent observers and boarding teams.

“Seychelles was also the only country that had its own nationals manning and in command of its vessels and aircraft," he added.

This was Seychelles’ second time participating in the Cutlass Express exercise after its first collaboration in 2013 when it was also the host country.