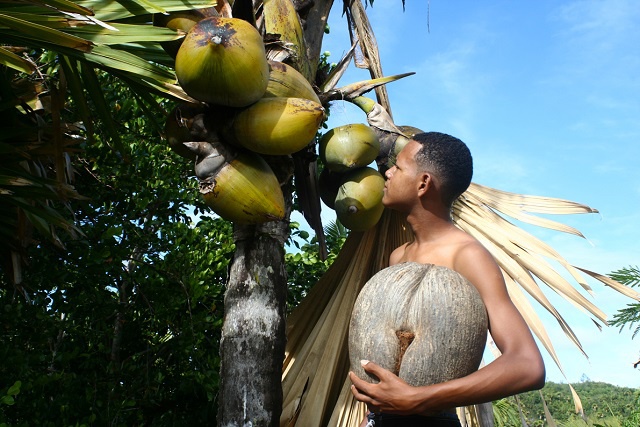 A Seychellois boy holds a mature inner shell of a Coco-de-Mer while gazing up at smaller nuts, still encased in their green husks on the palm tree (Gerard Larose, STB)

(Seychelles News Agency) - Far away from the rest of the world, a Coco-de-Mer palm (Lodoicea maldivica) stretches its long trunk towards the sky while a young seedling at its base tenuously thrusts out its first leaf. In the coolness of the Vallée de Mai, a UNESCO World Heritage Site on Praslin - the second most populated island of the Seychelles, the sheer otherworldliness of the palm forest seems surreal.

But for researchers at the Vallée de Mai, which is run by the Seychelles Islands Foundation (SIF), the atmosphere is conducive not just to a general sense of awe but also scientific curiosity.

SIF’s Chief Executive, Dr Frauke Flesicher-Dogley, has been the author of a veritable stack of research papers over the many years she and her team have spent studying the mysterious and strange Coco-de-Mer, which produces the largest nut in the plant world, weighing up to 25 kilograms each.

The plant has intrigued naturalists since the erotically-shaped nut, which resembles the shapely form of a woman’s behind, washed ashore in the Maldives after being swept out to sea from their home island of Praslin, once covered resplendently with the Coco-de-Mer palm trees.

Not knowing from whence they came, it was thought that an underwater palm produced the nuts, leading them to be called Coco-de-Mer or coconut of the sea.

Although the nut’s mysterious origin was finally established after the Seychelles islands were explored and settled, there were still many answers to questions about the Coco-de-Mer that have been eluding enquiring minds until the present day, such as how the largest seed in the world manages to germinate in the red soil of Praslin, which is naturally low in essential plant nutrients of phosphorous and nitrogen.

To answer this question, researchers measured the amounts of nitrogen and phosphorus in the leaves, fruit and male flowers. They also monitored the nutrient levels in the soil and measured the quantities of rain flowing down the trunk during inclement weather.

After years of data gathering and number-crunching, researchers at the SIF have now proven that the parental palm tree actually improves soil conditions for itself and its nearby offspring by its own design: creating its own nutrient-rich compost from decaying plant debris collected on the surfaces of its broad leaves and funnelling it to the base of its trunk.

The leaves of the Coco-de-Mer palm have evolved to form a gigantic funnel design, ensuring that almost all the rain which falls on them is directly channelled to the base of the trunk, while organic matter on the leaf surface such as pollen and nutrient-rich animal or reptile faeces gets flushed to the bottom of the tree along with the water.

Speaking to SNA in an email interview, co-researcher Christopher Kaiser-Bunbury of the SIF said that this realisation has been an important step towards understanding the evolution and ecology of the extraordinary palm.

“We started seeing the tree as a funnel, which was particularly obvious during a heavy rain shower in the Vallée de Mai,” said Kaiser-Bunbury.

From this lightbulb moment of inspiration, it took around five years to publish a paper in the January edition of the New Phytologist journal.

Using Dr Fleischer-Dogley’s decades of research on the life-history of the Coco-de-Mer as a base, the SIF research team collected data on plant and soil nutrients to build up a long-term data set.

There’s also an element of parental sacrifice in this story as well – the parent palm deprives its own trunk and leaves of phosphorous and nitrogen in order to give as much of the nutrients to its seedlings. In fact, the palms have only a small fraction of the levels considered normal in other plants, even when compared to other palm trees in Seychelles.

Even when a leaf dies, the nutrients are first drawn out and transferred downwards to the base of the trunk to help enrich the soil further.

According to the researcher, islands tend to naturally favour the evolution of large fruits and seeds.

“In this particular case, the ancestor of Coco-de-Mer had already relatively large seeds that were dispersed by a large terrestrial animal,” he told SNA, adding that the Coco-de-Mer lost its animal seed disperser when Seychelles broke off from the mainland due to continental drift.

Despite this parental care by the Coco-de-Mer palm to its offspring, there are still concerns about the survival of the nut, which is found nowhere else on earth besides Praslin and its small neighbouring island of Curieuse. The seed is listed as ‘vulnerable’ on the IUCN Red List.

The main threats to their germination and seedling stages remain human disturbance, invasive plant and animal species and a severe shortage of nuts to reproduce next to their mother trees due to persistent occurrences of Coco-de-Mer poaching.

An artificial method of Coco-de-Mer propagation is possible and there are skilled Seychellois horticulturists who have mastered Coco-de-Mer propagation, although Kaiser-Bunbury says a careful assessment should be done on whether and how they can be used in habitat restoration, for instance, on the red, eroded soil of Praslin.

There is still one more mystery that scientists are still struggling to solve about the Coco-de-Mer though. Scientists are still at a loss to explain how the female flowers, which are the largest of all the palm trees, are pollinated by male catkins some distance away in the male trees.

According to Kaiser-Bunbury, the SIF and its partners have been studying the pollination mechanisms of the Coco-de-Mer for several years.

“Given the low number and inaccessibility of female flowers this is not an easy task,” he explained, adding that there were a high number of potential pollinators, such as bees and lizards.

“We're employing a diverse set of tools and techniques to shed light on the cryptic pollination mechanism of the Coco-de-Mer, and I'm certain that we'll identify the pollinator soon. We will let you know!”