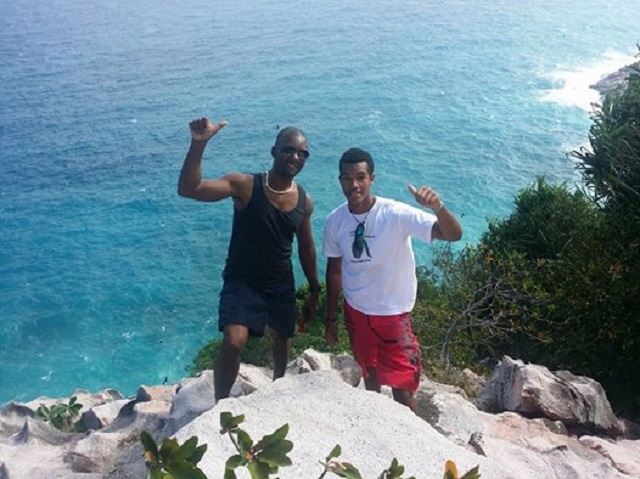 (Seychelles News Agency) - Late one Wednesday afternoon, two young girls clad in life-vests hold desperately to ropes around the rail of a small orange dinghy, trying without much success to keep the salt water spray off their faces and hair.

On good days, the small vessel with five people on board would have reached its destination in thirty minutes but on days such as these, with gushing winds and rough seas, the passengers must endure the bumpy ride for another fifteen minutes.

Followed closely by a similar vessel, this one filled to the brim with provisions and fuel, they wind laboriously around various small islands surrounding Praslin, the second most populated island of the Seychelles, before preparing for the final landing on their very own Robinson Crusoe-style destination; Aride Island.

“That was the scariest part,” remembers 17-year-old Herma Camille in an interview with SNA. “The way he [the skipper] waited patiently for a big wave and when the boat took off towards the beach, it was like a facing-death experience.”

The approach has to be well-calculated as the jagged coral reefs surrounding the island have been the cause of previous accidents in the past.

It was a heart-stopping welcome for Herma Camille and fellow student Angelique Tirant, who were to spend one month on Aride.

Because of its physical isolation, Aride is considered as an important breeding place for seabirds in the Indian Ocean region, boasting a seasonal population of sooty terns and shearwaters during the nesting season.

Throughout the year, the cheeky Magpie-robin, endemic to the archipelago but introduced to this particular island by conservation experts, thrives among the lush vegetation among a large variety of insects and a huge population of huge brown lizards, otherwise known as skinks.

Aride is the perfect setting for “learning on the job” experience for young students aspiring to become environmental conservationists and marine biologists.

School holidays in Seychelles occur around every three months for government schools and last between three to five weeks. But contrary to their younger counterparts, students in tertiary education have shorter holidays which often entail work attachments in various institutions, businesses and workplaces.

“I had chosen to go to an island because I wanted to live the island life to the full. I wanted to explore the different aspects of environment conservation and found the placement on Aride ideal,” says Shira Padayachy to SNA whilst recounting her own experience on the island.

Shira was one of the first of seven students from the Maritime Training Centre who have been chosen during the past two years for the placement programme on Aride Island.

After two years, graduates from the school are generally employed in various fields of work, including traditional and semi-industrial fishing, maritime industry and conservation.

“It was not all rosy,” recounts Angelique Tirant. “We had to wake up early for a briefing, then walk the whole island [a total area of 73 hectares] to give supplements and count the Magpie robin. After that, most days we had to do beach patrol which entails cleaning up debris and taking notes of tracks of sea turtles or nests.”

Another student, 17-year-old Benjamin Germain, recalls how there was always something to do scheduled throughout the day.

“Every two days a cruise ship will come and for hours we had to help disembark the tourists using our own dinghy. Sometimes the sea was rough but sometimes it was easy to get everyone in and out quickly. Having visitors on the island meant our hands were full for a whole day!”

Tour guiding was also a day-to-day activity for the young students and they had to learn everything about the island including its history as a leper colony, the acquisition of the island by Christopher Cadbury to its eventual status as a special reserve manage by the Island Conservation Society as well as all its conservation successes.

“I loved going to bed and waking up with the songs of the birds. Almost every night I had to chase a skink out of my bed,” said Shira Padayachy.

“I saw sea turtles laying their eggs for the first time on Aride and I never expected it to take so long, as the female needed a good spot, then needed to dig deep enough, then comes the laying of the eggs, then covering, then the struggling towards the sea,” recalled Herma Camille.

As part of their work on Aride, the rangers often have to save turtle eggs and a monitoring programme is in place to ensure that as many of the vulnerable little hatchling as possible safely reach the sea after incubation.

Away from civilisation, the young maritime students learnt to cope on their own. Although there are houses for staff on the island, these are equipped with basic amenities and solar panels ensure that they had electricity throughout the night time.

Rainwater is harvested from the roofs of the houses and a well ensures supply of water for other uses including the washing of clothes.

“We had internet and phone access plus we could go to Praslin on weekends if we wanted,” said Angelique Tirant.

For Ben, the most memorable souvenir were his hours spend diving and snorkelling in the pristine reefs of the island. “We found lots of fish, octopus, seashells, and all sorts of marine life that I have never found anywhere else as abundantly as on Aride. It was an exquisite experience. I could not wait to jump in on weekends.”

Speaking to SNA, the ICS' manager of Aride, Uzice Samedi says the programme allows the students to have a first-hand experience of conservation on islands.

“It allows them to come close to nature, understand their needs and the reasons why they must be protected. It gives them another perspective of Seychelles from what they are used to”.

British student was 'depressed' before jumping from plane: Madagascar police