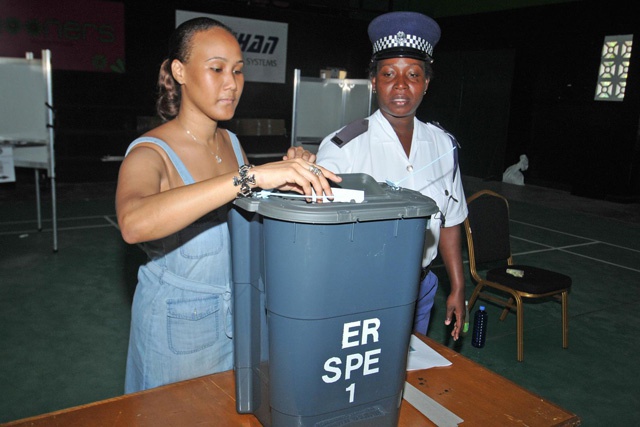 (Seychelles News Agency) - Things seem calm in the offices of opposition political parties in the Seychelles, an archipelago of 90,000 inhabitants located in the Indian Ocean, but below the surface things are quite different, particularly after Seychelles President James Michel made a surprise announcement by confirming his candidacy for the upcoming presidential elections in an email interview with SNA last week.

The announcement preceded the next presidential elections, which are expected a little over a year away in 2016.

The largest opposition party in the archipelago, the Seychelles National Party (SNP), which had got around 41.3 percent of the vote in 2011 during the last election, seems to be taking its time to get going.

In January, the SNP announced its participation in the upcoming elections.

“Right now, there is nobody within the SNP who is a candidate for the next election because the election date has not yet been announced,” SNP leader Wavel Ramkalawan told SNA. “When the elections are announced or when the party will see that we are close to the deadline, then the party will decide. We will propose candidates and it is the [party] convention that will make that decision."

When asked if he would stand as the party’s presidential candidate, he replied, "If the party asks me, then I'll be ready for this challenge."

"We at the PDM, we are ready to face any candidate who is chosen by a party for the election. Our focus is not on an individual, but our principles, what we believe we can offer the Seychellois people to enable them to understand that in a PDM government, we can have a better life,” said David Pierre, the leader of the PDM.

"The PDM will definitely participate in the upcoming elections, because we believe that we have something worthwhile to offer the people of Seychelles. We are starting to change the country into something better.”

Not a surprising announcement

The political parties of the opposition have said they are not surprised by the announcement of the candidacy of President Michel for the ruling Parti Lepep as it is in line with the country's constitution, which allows him to participate in three consecutive terms of five years. What surprises Ramkalawan however, is the way it happened.

"What I find funny is that his party has a mechanism through which to designate its candidates. In the past, René had brought James Michel with Joseph Belmont before the party as the proposed candidates, to which the Congress agreed, but this time, James Michel is in the process of showing that his party is not important, and that it is he who decides. I think there is a great confusion in Parti Lepep,” he said.

For now, the three main opposition parties SNP, SUP and PDM confirmed that they would participate in the elections, but nothing has been decided on the way forward.

“I think Seychellois want a credible movement to change the government of the day... I think it [the opposition] is very lively, but perhaps it has not yet proven itself for people to judge," said Ernesta.

"What we are asking is for people to unite around a single candidate, with the hope that this will enable us to be stronger. In the SNP, we are a serious party... if there is someone who purports to be serious in opposition and who wants to work with us, and if we agree, then we will, but for now we believe that the SNP is the only organised party in opposition," said Ramkalawan.

"One day, perhaps, the opposition will be united, I have nothing against that, but I think there should be some changes in some political parties for unity in opposition, as there are still some divisive figures and as long as these conditions exist, I think it is difficult to have an opposition that is united. In principle, I have nothing against the unification to go together to the election with only one candidate," said PDM leader David Pierre.

Whose victory will it be?

President James Michel has said he was confident of winning the next election, but this view is not shared by the opposition, which believes that the game is still afoot.

"According to my analysis today, if a political party says he will win the elections, I think it is premature, for no one knows what the people's choice will be. They are listening, it is being analyzed, and it's what will come out of the ballot box that will determine the result. If you were to ask me to predict the outcome of the election I might be wrong," said Ramkalawan.

"Today, we should not see the opposition in terms of the number because it has virtually disappeared in the Seychelles,” said Ernesta. “It's not a matter of opposition against the ruling party, what we see today is the government against the people.”

“People are not satisfied with the government and the ruling party is fragmented... and all this cannot be seen as partisan politics, because it is no longer the case,” Ernesta added. “What I predict is that people will vote against it, in fact the voters of Parti Lepep will vote against President Michel.”

"I predict that in the next election, there will be greater participation, not as much as we used to see before, but around 80 percent... although I do see a drop ... and if there is a decline this will be to the detriment of the opposition, because speaking for the PDM, we do not have the same resources to mobilize our supporters to vote... and mobilizing the resources is key - the more resources you have, the more you can mobilize people. The party that has the most resources will have an advantage in this context," said Pierre.

Seychellois public has some decided and some undecided electorate

"I find that life is difficult, expensive, and to start a business, administrative procedures are complicated, we should make things easier to do business. There are people who eat only once a day. I have not yet decided who I will vote for," said an undecided Seychellois.

"I think the candidacy of President Michel is good, because I find nothing wrong with what he does. We all know that life is hard, but what he does is good. In the next election, I would vote for him because I have always voted for the ruling party. Whether good or bad, I will continue in the same direction," a supporter of the ruling party, Parti Lepep, told SNA.

"I have not been informed of the candidacy of President Michel... I think the country is going the wrong way. You really struggle to live... as for my choice, it's taken a long time, and it's the same decision for a long time - we need a change," said one supporter of the opposition.

James Michel was the Vice President of Seychelles from August 1996 until April 2004, when he succeeded former President France Albert René upon his retirement.

Ramkalawan also participated in the presidential elections in 1998 and in 2001 against former President France Albert René, who won both elections.