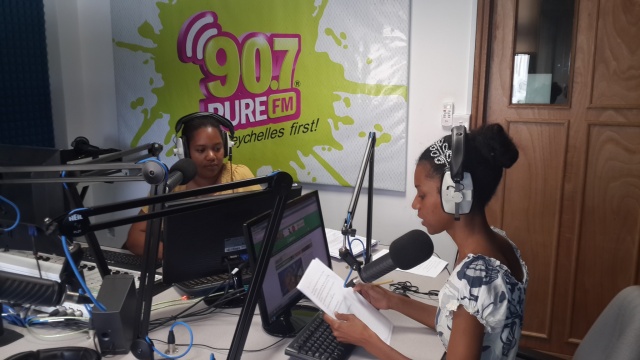 Presenters at Pure FM, Seychelles' first privately-owned radio station. In Seychelles, which has a population of 90,000, with two daily newspapers, 1 tri-weekly and 3 weeklies, 3 radio stations, 1 national television station, there is a safe climate for journalists. (Seychelles News Agency)

However, media experts in Africa’s smallest state, with its population of 90,000, say there is still much to be done to improve media freedom in the country.

Seychelles ranked 96th on the 2015 index, which examined incidents of reporters being killed, censored and harassed in a total of 180 countries around the world between October 15, 2013 and October 14, 2014. The archipelago of 115 islands scattered across the western Indian Ocean scored even more dismally last year, ranking only 103rd.

The archipelago has two daily newspapers, one tri-weekly and three weekly papers, three radio stations, including one privately-owned radio station, one national television station and an online news agency.

A visit to the Seychelles by RSF’s Africa Desk director, Cléa Khan Sriber in June last year may have helped elevate the 2015 results somewhat, although Khan Sriber noted that she had found media houses in Seychelles to be “polarised and partisan”.

The country’s ranking is under the section of countries classified as having “noticeable problems”.

The chairperson of the Seychelles Media Commission (SMC), Ibrahim Afif, told SNA that he was happy that Seychelles had moved up in the ranking but said there was still “much to be done before we can get to the top”.

“I think we have to have a wider variety of radio and television and there should be more participation by people in the media,” he said. “At the same time, I deplore people who misuse the media to insult and make irresponsible use of the freedom of expression.”

Noting that Seychelles was only ranked 24th in the African region, Afif said that media in Seychelles still needed to “open up” a lot more.

“I think we have a long way to go. I don’t see why we can’t make a sufficient effort to get to at least the top ten in Africa. I think we can get there, but it requires goodwill from everybody in the country,” he told SNA.

The three African countries regarded as having the freest press were Namibia, Ghana and Cabo Verde, positioned 17, 22 and 36 on the global rankings respectively.

An opportunity to improve

The chairperson of the Association of Media Practitioners of Seychelles (AMPS), Gervais Henrie, told SNA that he primarily saw the improved ranking as a positive sign, adding that he believed that this should be viewed as encouragement to do better.

“In 2002 we had the best ranking – at 60th position – and in 2002 there was no Seychelles Media Commission, no private radio station, there was no TODAY in Seychelles as another daily newspaper, some of the current newspapers also were not there.”

Henrie said that the biggest challenge that lay ahead was concerning access to information, deploring current conditions where various government ministries and departments practised “selective engagement” with the media.

Henrie also said the government needed to stick to its promises to undertake certain reforms, such as its recent commitment to adopt the African Union Model Law on Access to Information after AU Special Rapporteur on Media Freedom and Access to Information Pansy Tlakula’s visit to the Seychelles in January this year.

“Then there are other laws like the Public Order Act (POA) that restricts journalist from taking photographs of policemen,” said Henrie. “These are small things that are impeding the freedom of journalists to work in a free and independent manner.”

The media watchdog gives an overview of media censorship around the world which is worrying, reporting that it had seen a general “worldwide deterioration" in press freedom over the past year.

“Two-thirds of the 180 countries surveyed for the 2015 World Press Freedom Index performed less well than in the previous year,” RSF said in a press statement accompanying the release of the report.

Significantly, one of the most concerning declines recorded was that of the United States, falling three places since last year to rank 49th globally.