Romance really is in the air! Seychelles helicopter company helps tourist to pop the big question 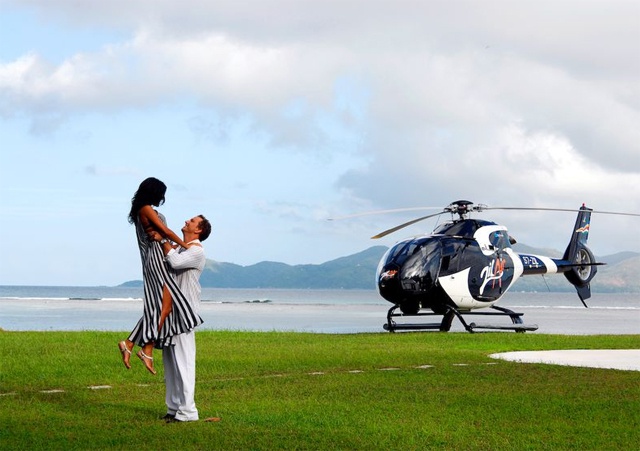 (Seychelles News Agency) - For many men, that big moment you ask a woman to marry you can be even more nerve-wracking than the actual exchanging of wedding vows. That's why one visitor to the Seychelles islands put together a plan that he was sure his lady love could not possibly turn down.

In a recent GoPro video posted to YouTube pilot Tim Loens from Seychelles helicopter chartering service ZilAir describes a client who requested that the company help him to pop the question to his girlfriend in style.

The couple, who were believed to be of Polish nationality, boarded the helicopter for a scenic trip over the Ste. Anne Marine Park, Port Victoria and then up to the north of the island before turning around to head back to the Seychelles International Airport in the Pointe Larue district in the east of the main Seychelles island of Mahé.

But on the return leg, as the helicopter passed the long, pristine beach of North-East Point, the flight crew instructed the passengers to look down at the beach, which is when the surprised girlfriend saw a large banner spread out on the beach, inscribed with the message "will you marry me?"

Naturally, the emotional bride-to-be said yes, and the co-pilot was standing by with a camera to capture the happy moment for the couple's photo album, proffering champagne on ice to seal the deal.

Marketing coordinator for ZilAir, Katia Antignani, says proposals in the air are becoming increasingly popular among both tourists and locals.

And according to Antignani's knowledge, there has never been an instance where the prospective bride has turned down the proposal.

"With all the proposals we have had, the guys know for sure that she will say yes," laughed Antignani. Almost certainly, the highly romantic gesture alone is sure to soften any lady's heart.

"I think we also did one at Cap Lazare quite a while back, where we wrote the couples names in a heart on the beach with the question 'will you marry me?' - the letters need to be quite large as they have to be visible from the air."

It is apparent that romance is a key factor for most people wishing to take helicopter rides, especially in Seychelles, long famed as one of the most popular honeymoon locations in the world.

The 115-island archipelago scattered across the blue and turquoise waters of the Indian Ocean is one of the most untouched and pristine destinations in the world, attracting around 200,000 visitors each year.

The destination is also becoming highly popular as a wedding venue, with increasing numbers of people choosing to tie the knot in an intimate and romantic beach ceremony next to the ocean waves.

ZilAir's staff members are willing to go out of their way to make these precious moments even more special for couples in whatever way necessary, such as sunset trips and landing on sandbanks at low tide.

"For us, as long as the flight path is safe we can accommodate whatever the client wants to do," Antignani told SNA.

She also shared another story of a client who arranged another crazy and elaborate scheme to get his girlfriend to say yes, with a little help from the ZilAir team.

"He arranged a car hire, and at some point around the North East Point area, the car suddenly 'broke down'," she said. The helicopter landed on the beach to 'rescue' the man and his surprised girlfriend, who received yet another surprise during the flight as he popped the big question.

According to Antignani, the price of the ZilAir charters vary considerably based on the client's requirements, but range from around 360 Euros ($410) for a quick 15-minute flight, 740 Euros ($840) for a sunset tour and upwards for inter-island trips and special packages.